We use cookies to provide you with a better experience. By continuing to browse the site you are agreeing to our use of cookies in accordance with our Cookie Policy.
Home » Milling Operations: Reviewing maintenance strategies

KANSAS CITY, MISSOURI, US — Milling in any part of the world is a complex business. Material handling from receiving of wheat to the loadout or packaging of flour and feed takes many forms, including simple gravity flow, positive and negative pneumatic conveying systems, belt, screw, drag, oscillating, vibratory, bucket, chain, and tabletop conveyors.

A simple flour mill with a capacity of 300 tonnes of wheat per day (approximately 5,000 cwts or 225 tonnes of flour per day) may have at least as many maintenance items and a variety of input/output devices as shown in Table 1. The number increases with equipment complexity, level of automation and control points monitored and controlled. Complexity increases as mills moved from line shaft powered rolls to individual drive rolls and rolls with individual feeder roll motors rather than feeder rolls driven by grinding rolls.

Maintenance is critically important to ensure mill operation is uninterrupted when operation is required to meet budgeted demand. Unplanned downtime caused by equipment failure is costly, increasing both fixed and variable costs. Production staff, energy and associated variable costs realized while flour is not being produced, as well as fixed costs, are distributed across reduced flour production. In addition to lost production, the equipment failure often results in increased repair costs that could have been avoided had the equipment not been operated to failure.

Often a precursor of failure is reduced operating efficiency as well as inferior product quality. Worn drive belts and bearings may increase energy consumption while improperly grinding or classifying mill stocks resulting in inferior quality product. Operating to failure often increases repair cost for example, repair of damage to a worn shaft or bearing housing caused by a worn bearing would be avoided had the bearing been replaced at or before bearing failure. Moreover, operating to failure often compromises safety of the working environment. Bearings operating to failure as in the previous example may generate heat and/or sparks resulting in a fire or more catastrophic grain dust explosion. Catastrophic failures may result in extreme and costly damage to assets, injuries to personnel, compliance, and liability issues. 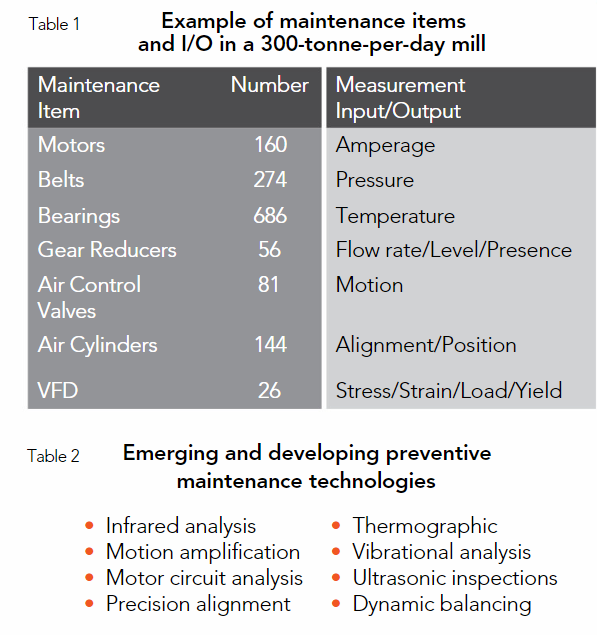 In the 1970s and earlier, maintenance often was based on equipment needs or demands. Differed maintenance often resulted in emergency repair activity, which often resulted in collateral damage requiring considerable time and expense to correct. In most cases, information about plant equipment, drives and control systems was not well documented or managed. Maintenance was relegated to putting out the fires necessary to keep the plant in operation. Monitoring often was limited to sight (vision), hearing (auditory), smell (olfactory), taste (gustatory), touch (tactile) and vestibular (movement and balance sense).

Maintenance store rooms were filled with materials and parts that may or may not be required resulting in non-productive financial investment and poorly controlled inventory. Some mill’s maintained “bone yards” of used equipment, including motors and drives in various states of condition that would be used in emergencies to keep the facility operating. Maintenance costs were significant yet failed to provide for plant operation meeting budgeted levels of performance. Often, the budgeted performance level or productive run time was set based on the ability of keeping the plant in operation. Improvements were planned but often fell short.

Maintenance employees started to realize the best way to address a problem is to prevent the problem from occurring. Time to failure was recognized as a factor and considered in the development of early preventive maintenance activities based on equipment maintenance requirements. As a result, inspections at planned time intervals combined with parts replacement prior to failure became more prevalent. More information about plant equipment, drives and control systems was being documented and managed in spreadsheet or databases to develop a schedule and strategy.

Unfortunately, some schedules were adhered to without a much closer examination of costs or impact. For example, positive displacement blower oil may have been changed on a time schedule independent of oil condition. Disposing of oil with remaining time in its lifecycle was a waste of resources and included the cost of oil, disposal costs and labor.

Planning of preventive maintenance activities became more condition-based but easier to handle with the use of computers and development of Computerized Maintenance Management Systems (CMMS). Even greater amounts of information about plant equipment, drives and control systems were being documented and managed by CMMSs.

Storage rooms became leaner, smaller, neater, with inventory more well managed. As preventive maintenance in the 2010s progressed, it was not only based on equipment but also the use of sensors and devices considering time, failure, and condition of equipment in operation.

For some millers in older plants, the use of CMMS presents a significant challenge due to the need for equipment and drive information input and personnel support required to realize system potential. With newer construction, perhaps the information was more readily available but still required verification as plans and reality often intersect during installation and startup.

New preventive maintenance methodologies emerged including but not limited to those shown in Table 2 and had been employed in many other industries began to be discussed and used in the milling and grain processing industry.

Advancing from preventive to predictive maintenance is based not only on equipment but utilization of sensors and devices connecting via the Internet of Things (IoT), allowing for analysis of data to develop a predictive forecast.

Collecting and analyzing historical data remains an essential component of predictive maintenance. The data collected must be accurate, reliable and timely. Analysis and predictive forecast strategies must be flexible to meet changing needs.

Risk-based assessment of the predictive forecast must be developed to prioritize maintenance activity. This will permit maintenance skill sets to be deployed to address the critical few rather than the trivial many maintenance challenges. For example, it may be more critical to maintain the wheat transfer system to the mill than a wheat unloading system with a full grain storage elevator.

Preventive maintenance methodologies introduced in the 2010s have become more advanced and improved in scope and capability with greater use in the milling and grain processing industry. Millers and milling engineers will use IoT and the power of data collection and analysis to develop Artificial Intelligence (AI) to evolve more efficient grain conversion processes in addition to reliability maintenance.

The primary mill maintenance goal should be to ensure the milling asset is available for operation 100% of planned operating time (100% reliability). Every piece of equipment is important and can put the mill down or cause inferior product quality, reduced production rate or yield. Make sure your production and maintenance staffs both understand how various pieces of equipment work, signs of equipment failure and, most importantly, communicate and work together.

Are you ready for industry 4.0?

Jeff Gwirtz, a milling industry consultant, is president of JAG Services, Inc. He may be reached at jgwirtz@att.net. 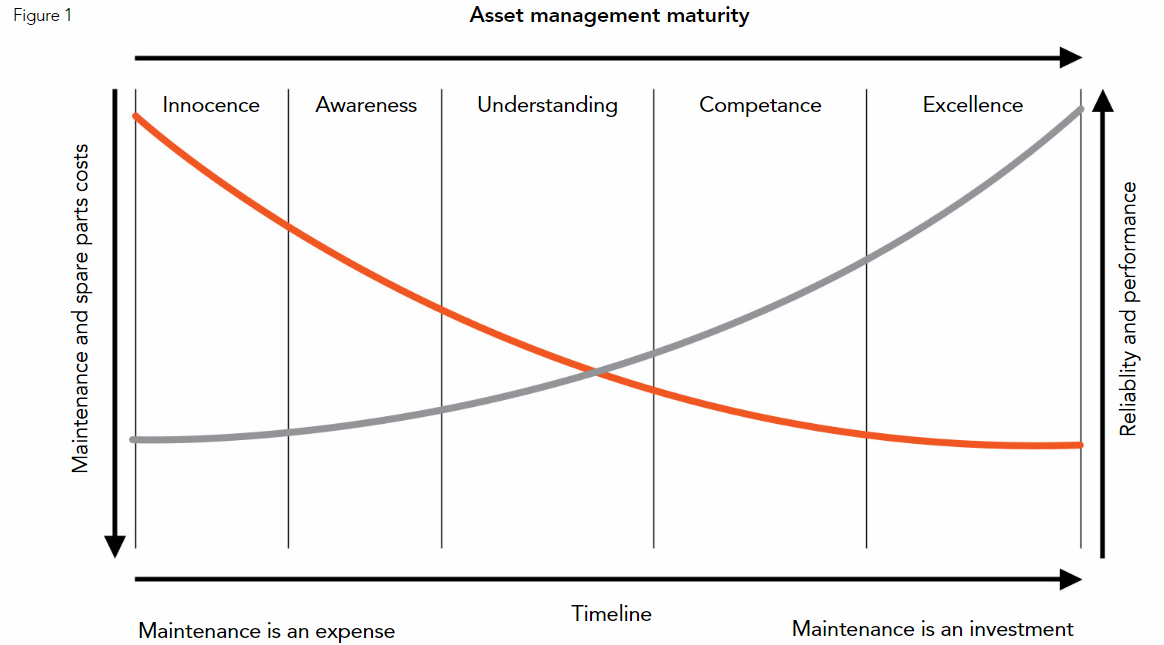