KANSAS CITY, MISSOURI, US – The flour extraction rate in US flour mills has increased steadily over the past 80 years or so, from 71.6%% to 77.5%, according to statistics from the US Department of Commerce. The trend begs the question: What is the reason for this improvement?

Data shown in Table 1 (right) present yield or extraction data based on the wheat ground for flour. Yield is reported for 98% of the milling industry with milling capacity of 400 cwts/day (approximately 25 tonnes/day of wheat). In the United States, flour mill yield often is expressed as the number of bushels of wheat required to produce a hundredweight (100 pounds) of flour. 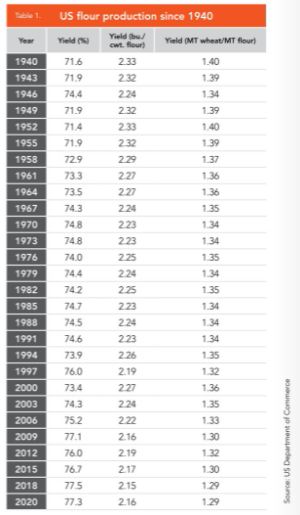 Those working in the mill on a daily operational basis more often focus on the flour yield or extraction based on the wheat to first break or B1. First break wheat has been cleaned and tempered as needed to produce product with desired properties. In the process of cleaning, the removal of non-wheat material and wheat not suited for milling represents a reduced quantity of wheat to the mill.

The addition of moisture in tempering increases the mass of wheat moving to B1. Both the cleaning and tempering are dynamic processes that vary in magnitude due ideally limited to properties of wheat purchased but realistically impacted by equipment and operational variability. Measuring performance based on the tempered wheat to B1 allows the operator to focus on the mill, assuming proper operation of cleaning and tempering units has taken place, thus providing a uniform mix or grist of clean tempered wheat.

Some factors that may have resulted in steadily increasing flour yield since 1940 include changes in agronomic practices, changes in the milling process over time and the market. As one might imagine, each of the factors have components or issues that potentially have both positive and negative impacts on flour yield.

Wheat variety improvements and selection along with use of fertilizers, pesticides, fungicides, and herbicides have improved wheat production quality.

Improvements in harvest technologies, moving from sheath and thrashing to modern-day combining, also have improved the quality of wheat delivered to the market.

Improvements in wheat testing and grading, transportation, and storage and handling management, including temperature monitoring and pest control practices, have contributed to increased yields based on dirty wheat delivered to the mill.

Equipment for cleaning, tempering, and milling undoubtedly have led to increased ability to extract the 85% endosperm available more precisely from the wheat kernel. Even at today’s flour yield, a significant proportion of the wheat endosperm leaves the milling operation as a feed byproduct. Nearly 25% of mill byproduct may be measured as starch, which is 78% or more of the wheat endosperm, suggesting the potential for additional yield increases. Hopefully, millers and equipment manufacturers address that challenge as we seek to feed the world’s increasing population.

Use of 2.28 bushels per hundredweight of flour production observed in the 1960s significantly overestimates the cost of raw materials when compared to the current yield level of approximately 2.15 bushels/cwt. Imagine mills operating at 2.28 bushels/cwt today may be looking for a new miller.

As previously indicated, first-break wheat has been cleaned and tempered as needed to produce flour with desired properties. Wheat flour ash (non-combustible mineral remaining after a flour sample is burned) content is a controversial wheat flour property. Ash itself may not impact baking performance but the presence of ash in other wheat flour components and compounds, including perhaps enzymes involved in transport during kernel development in and around the Aleurone layer, may impact performance.

Outside the United States there is less focus on ash content with greater focus on color and other functional properties. Countries or markets utilizing ash consider it a measure of milling performance reflecting the miller’s ability to separate bran, germ and endosperm.

Wheat milling flows have become shorter and more heavily loaded with aggressive grinding and reduction approaches. While this may increase flour yield, it also may contribute to increased flour ash content. Others suggest that to increase wheat yield per unit of land that additional and smaller kernels are being bred into wheat varieties, resulting in increased wheat ash.

The point is that increased flour yield for a given mill usually results in higher ash flour given the current processing technology. The relationship is more of a sigmoid shaped curve low in ash content (0.25% to 0.35%) in the very beginning and gently increasing as endosperm is isolated and sharply increases as more bran than endosperm is available for recovery.

As mentioned earlier, some suggest   that additional and smaller kernels are being bred into wheat varieties to increase wheat yield per unit of land in wheat production. It is well documented that smaller wheat kernels produce higher ash flour. US Wheat Associates data suggest hard red spring wheat is slightly higher in ash content compared to hard red winter, and more importantly the five-year average of each wheat class dating back to 2000 encompassing 1996 production is similar or slightly decreasing in wheat kernel ash.

When the public or nutritionists suggest millers determine the properties of wheat flour with respect to nutrition or color, it shows a lack of understanding in the supply chain. Millers work to provide flour meeting the baking industry and/or consumer specifications or expectations. They do not set the specifications or standards. Annually, at least, and sometimes more often, the miller must explain the impact of crop harvest quality, wheat availability and mill capability in achieving customer specifications and expectations. Economic and technical considerations are balanced in the baking industry just as they are in the milling world. In turn, the baking industry is driven by the demands of the final consumer of their product.

Today, the reported bread flour ash content is 0.50% to 0.55% (14% m.b.). The allowable increase in ash content is most likely the result of economic pressure to reduce flour cost by the bakery customer. Increased flour yield lowers the cost of wheat needed to produce a unit of flour. Pressure to reduce ingredient cost at the bakery or for customers generally justifies a technical sensory test between the current standard ash content flour and a slightly increased ash content of perhaps 0.02% in the flour.

Given the small incremental change in flour ash content, the ability to identify a statistically significant negative processing or finished product performance is minimized and the higher ash flour is accepted, becoming the new standard. Having been part of such evaluations in cereal and bakery facilities, it is possible to confirm that such evaluations become cyclic in nature and over time — perhaps several decades — the standard has appreciably increased.

Any expectation of returning to a past set point in ash content is eschewed due to cost as the lower ash flour required would likely come at an increased cost. Marketing and market research would have to spend a significant amount of money in plant and product consumer testing to determine if the increased cost would provide improvement in trial and repeat sales, thus increasing brand profitability. This would be a very difficult justification.

As flour yield will increase, ash content of straight grade flour is likely to increase until technological advances improve the degree of separation in the milling process. Economics will demand it, and it will happen if bakers and consumers find the technical consequences acceptable. The good news for the baking industry and consumers is that whatever ash content is required can be supplied, at a price. The good news for the milling industry is we can produce low or high ash flour products to meet specifically justified wide ranging bakery and consumer demands.