We use cookies to provide you with a better experience. By continuing to browse the site you are agreeing to our use of cookies in accordance with our Cookie Policy.
Home » Focus on Romania

Romania qualifies as one of the Black Sea origins for grain, with Russia and Ukraine, but it also has the advantage of being a member of the European Union (E.U.), with its farmers supported under the E.U.’s Common Agricultural Policy.

The country’s farm minister, Petre Daea, is chairing E.U. meetings of national farm ministers during the first half of 2019 as the country holds the revolving Presidency of the Union’s Council of Ministers. That gives Daea the difficult task of steering reform proposals for the CAP through ministerial meetings.

Romania is becoming an increasingly important producer and exporter of grains. It serves as a conduit to the outside world for much of southeastern Europe, with grain coming by barge along the Danube. It is an important supplier to destinations in the eastern Mediterranean and Middle East as well as to other E.U. countries.

According to the IGC, Romania’s total grains production in 2018-19 is 26.9 million tonnes, up from 27.4 million in 2017-18. The figure includes 10 million tonnes of wheat in 2018-19, a figure from the November IGC report that is a sharp upward revision from the 8.5 million estimated in October, compared with 9.7 million the year before.

Romania’s rapeseed crop for 2018-19 is put at 1.5 million tonnes, compared with 2 million the previous year.

A USDA report published in July forecasts Romania’s 2018-19 wheat exports at 5.9 million tonnes, down from 6.1 million tonnes the year before. Egypt is generally Romania’s biggest customer for wheat, but the country faces strong competition from supplies from Russia and Ukraine. Shipments to Egypt were overtaken by those to fellow E.U. Member State Spain in the months leading up to the report’s publication.

The attaché forecast Romania’s 2018-19 corn exports at 3.9 million tonnes, down from 4.8 million the year before, noting that area declined “mostly due to corn farmers losing money during the previous year’s drought.”

Other E.U. countries, led by Spain, are the biggest buyers of Romania’s corn. Outside the E.U., Turkey and Lebanon are also big markets.

The same report also noted that “as neonicotinoid application remains prohibited in the E.U., Romanian farmers appealed to the Ministry of Agriculture to approve a new derogation for corn and sunflower.”

“Following the notification to the E.U., the Ministry of Agriculture granted the derogation in January 2018, earlier than previous years,” the attaché said. “In response to the claims that neonicotinoids harm bee populations, several Romanian farmer organizations, bee keepers, and agro-input and seed producers issued guidelines to ensure effective protection of both plants and bees.”

Romania’s 2018-19 barley exports are put at 1.2 million tonnes, down from 1.52 million the previous year. Saudi Arabia is the biggest customer, but Iran and Spain are also major markets.

“As a net grain exporter, Romania is heavily reliant on its transportation infrastructure to ship grain to the Black Sea,” the attaché explained. “The port of Constanţa is the main trading hub for agricultural commodities from not only Romania, but also neighboring Bulgaria, Hungary and Serbia.” 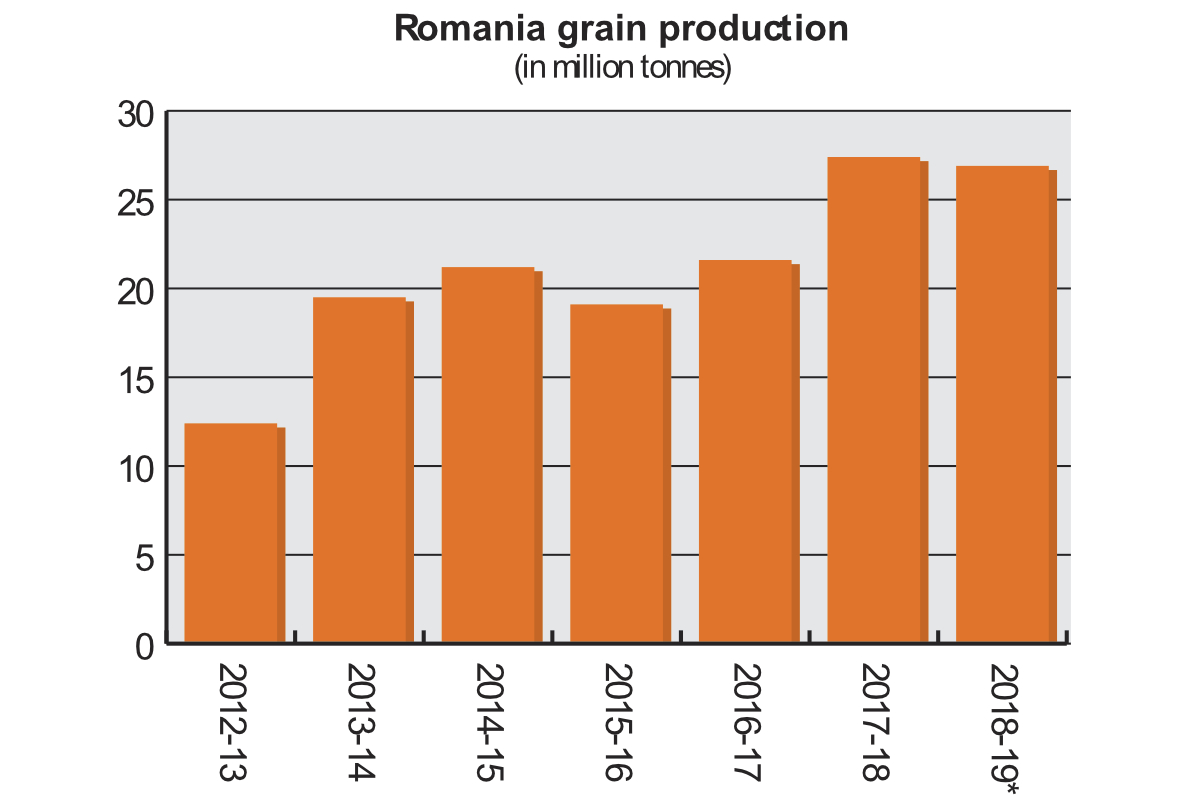 The attaché noted that Constanţa’s grain storage capacity is expanding, putting it at 1 million to 1.5 million tonnes.

“According to data published by the Constanţa Port Authority, grain and oilseed volumes shipped in 2017 decreased by 9% from 2016, mostly due to lower exportable supplies from the neighboring countries,” the report said.

Storage capacity in Constanţa has been bolstered by the addition of Swiss company Ameropa’s Chimpex terminal, which opened in June 2017. The new terminal adds 200,000 tonnes of storage capacity and has a berth that can handle up to 10 vessels at a time. The draft is sufficient for panamax vessels.

For rapeseed, the attaché put Romania’s 2018-19 production at 1.65 million tonnes, down from 1.9 million the year before, with exports at 1.32 million tonnes compared with the previous year’s 1.56 million. The attaché said the fall in production is due to rotation and weather factors but noted that “rapeseed is increasingly popular among Romanian farmers, who view it as a profitable crop due to relatively strong market viability and stable yields.”

The European Flour Millers puts the total number of flour mills in Romania at 300, with 180 having an annual production capacity (wheat equivalent) of over 2,000 tonnes. It also suggests there are an additional 800 mills providing direct services to farmers. Total flour production is 1.4 million tonnes of common wheat flour and 4,500 tonnes of rye flour. Capacity utilization is put at 45%. About 80% of the wheat used by flour millers is domestically produced, with the rest coming from Hungary, Bulgaria and Ukraine.

Romania had to abandon a plan to increase ethanol use this year.

“The blending mandate has been flat at 4.5% since January 2014,” an attaché report on biofuels E.U.-wide explained. “The rate was set to rise to 8% starting with January 2018. However, due to the inability of domestic producers to supply the volume resulting from the higher blend, the government postponed the date of implementation by one year to January 2019.”

The country has a generally positive attitude to biofuels, according to an attaché report on the issue, but it has not translated into action.

“Romania continues to be one of the European Union’s most progressive member states regarding agricultural biotechnology,” the report said. “Although no biotech crops were grown in 2018, Romanian farmers continue to support modern technologies. The Government of Romania (GOR) permits biotech field trials, but current research is limited to genetically engineered (GE) plum trees.”

Despite strong support from Romanian farmers for GE crops, no biotech crops have been planted in Romania since 2015, the report noted.

“Rigorous traceability rules, difficulties in marketing the crops, and low disease pressure have discouraged farmers from planting the only E.U.-approved corn product for cultivation, Bt corn (MON 810),” the report said. “Farmer groups remain the largest community to support biotechnology, complaining about the paradox of having Europe covering its feed deficit through imported biotech products, but showing a strong opposition toward planting these crops. At the retail level, the key buyers require non-GE certification for food products from their suppliers. Meanwhile, consumers tend to show resistance to GE food products and continue to perceive biotech products as not sufficiently safe or regulated.

“The Romanian public is also barraged by abundant disinformation and anti-biotech propaganda on social media and through conventional media platforms. These nonscientific, scaremongering campaigns seek to spread disinformation about consuming GE-derived foods.”