Malaysia doesn’t produce any wheat and produces a small corn crop, leading it to import both for food and feed uses. Rice remains its staple food and a lack of self-sufficiency makes it a big importer. It is, however, a major producer and exporter of palm oil.

The International Grains Council (IGC) forecasts Malaysia’s total grains imports at 5.5 million tonnes in 2018-19, compared with 5.6 million the year before. Forecast 2018-19 imports of wheat are 1.6 million tonnes, down from 1.5 million in 2017-18. The import figure also includes an unchanged 3.9 million tonnes of corn.

Australia is by far Malaysia’s biggest wheat supplier. According to the IGC, its shipments to Malaysia were 786,000 tonnes in 2017-18 and 1.065 million in 2016-17. Other big sources were the United States, Ukraine, Russia and Canada. Argentina dominates shipments of corn to Malaysia. In 2017-18 it provided 2.244 million tonnes, compared with 2.291 million the year before.

“Imports from the United States are mostly hard red spring wheat, which is high in protein and has superior gluten quality that makes it ideal for high quality bread and pastries,” the attaché explained in an annual report on the grains sector published in April. “Wheat imported from Australia is mainly Australian Premium White Wheat, which is used to produce Asian instant and fresh noodles. Malaysia also imports Australian Standard White, which is used to produce Indian flat bread, namely Chapati and Prata breads.”

Corn production in Malaysia is stable at 58,000 tonnes forecast for 2018-19, the same level as the year before, according to the attaché.

“There is no commercial corn production for feed in Malaysia,” the annual report said. “Most corn produced in country is sweet corn for human consumption.”

The report noted that corn is planted in rotation with other plants such as banana, sweet potatoes, pineapple and watermelon to complement farmer income.

The attaché suggested that more Malaysian feed millers may switch to U.S. corn in the future and that demand for corn is likely to increase as a function of increased demand for poultry meat. 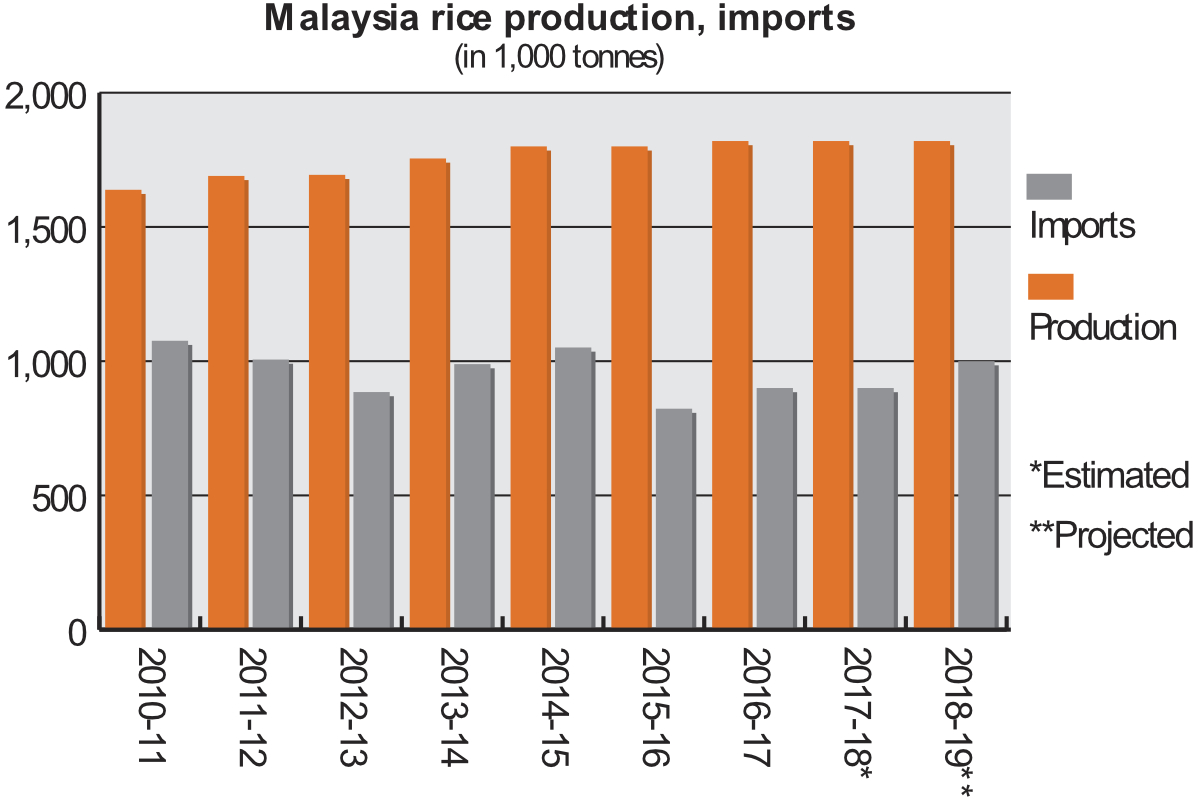 “Although western food such as tortillas, pizza, pasta and bread are gaining popularity, especially in urban areas, rice remains a staple food,” the report said.

The Council also forecasts imports of 1.4 million tonnes of soy meal, again unchanged from 2017-18. According to the attaché in an annual report on the oilseeds sector, “the poultry industry consumed more than 80% of the soybean meal imported, and the remaining was for swine and aquaculture industries.” About 95% of Malaysia’s soymeal is imported from Argentina, according to the attaché.

The attaché forecasts 2018-19 imports of soybeans at 860,000 tonnes, up from 850,000 the year before, noting that soybean crushing is increasing in line with the growth in the poultry industry. The United States is the largest supplier of soybeans to the country.

A study prepared by a University of Malaya team entitled, “Subsidy Rationalization for General Purpose Flour: Market and Economics Implications” and published in the Journal of Asian Finance, Business and Economics in 2017, describes the industry.

“Basically, the Malaysian flour industry has been dominated by four major players in which Malayan Flour Mills (MFM) and Federal Flour Mills (FFM) are the clear dominator in the market with both companies controlling about 57% of the domestic market share,” according to the study’s authors.

They put the market share of Interflour, with four mills and a capacity of 1,690 tonnes a day, at 21%. Kuantan Flour has one mill. The report lists it as no longer in operation, but since it was published, the company has restarted production.

“The company has temporarily ceased its business operations as of the end of September 2016 due to financial constraints and has commenced reactivation of its flour milling operations since May 2017,” Kuantan Flour Mill’s annual report for 2017 said.

It warned that “flour milling operators, including KFM Group, face stiff competitions among other wheat flour millers in Malaysia, as well as imports,” but talked about plans to build market share.

The University of Malaya team also lists the Seberang Flour Mill, with one mill in the port area of West Port, making the total number of mills in the country 12.

“GP flour is mainly used for roti canai, bread, and other broad range of Malaysian sweet and savory treats. Among the popular brands of GP are Basikal, Bunga Raya, and Blue Key. Random checks at retail outlets indicated that most of the time, the price of GP flour is above RM1.35.”

The university experts are skeptical, having surveyed consumers on the subject, about the value of the scheme, noting that GP flour is unpopular, largely due to a lack of availability in consumers’ favorite shops.

“There is a strong justification for the government to rationalize the GP flour subsidy as it has some distorted effect on the market efficiency and competitiveness,” they concluded. “Malaysia may need to adjust to a more competitive price and market structure for the GP flour industry such as in neighboring ASEAN countries, which have moved toward less regulated markets that has contributed towards a much more efficient and competitive market.” 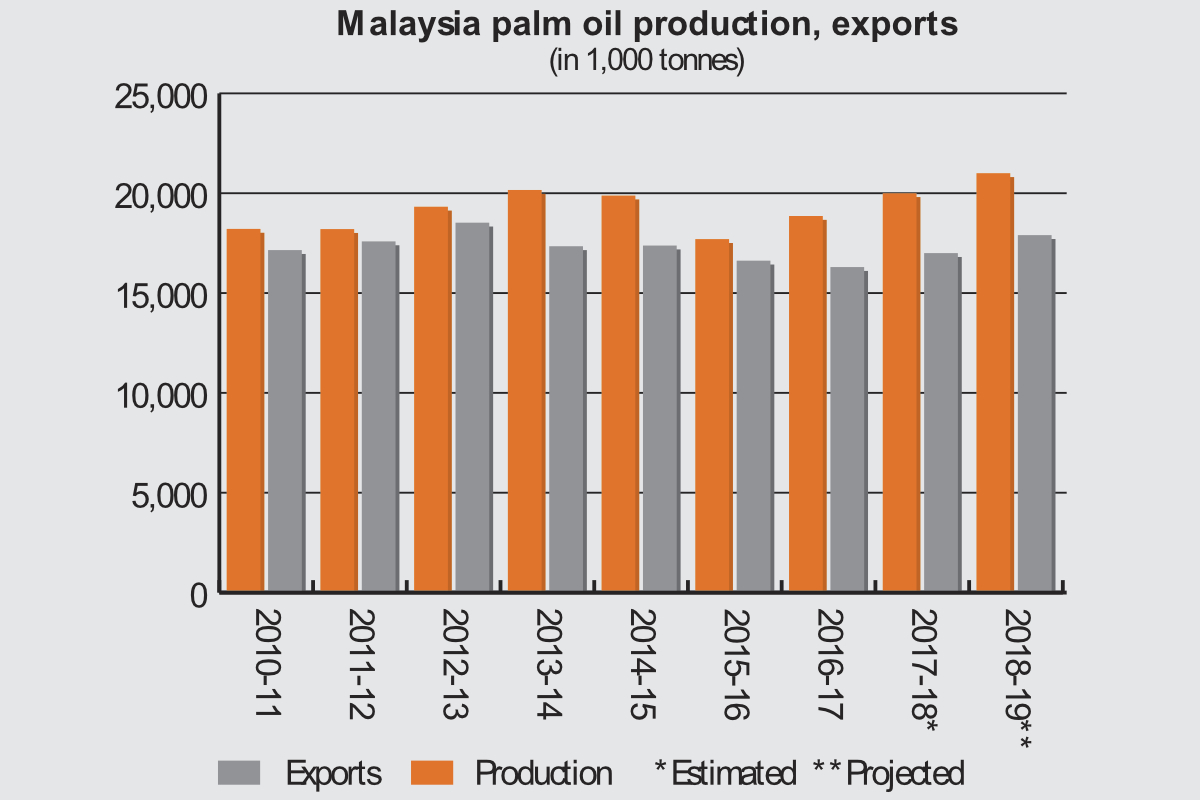 The attaché described labor as the main limiting factor in expanding production, in an annual report on the oilseeds sector. The report noted the introduction of mechanization is not proceeding fast enough to make up for the labor shortage. Area is being expanded by the conversion of non-profitable rubber plantations.

The attaché highlighted the European Parliament’s backing for a ban on unsustainable palm oil use for biodiesel from 2021, noting that 40% of crude palm oil exported to Europe is used for biodiesel.