Vietnam is one of the world’s leading producers and exporters of rice, but wheat consumption is growing. Imported grains and oilseeds play an important part in supplying the country’s big livestock sector.

There is no wheat produced in Vietnam. The International Grains Council (IGC) estimates its 2018-19 corn crop at 4.7 million tonnes, down from 4.9 million the year before.

The IGC puts Vietnam’s 2018-19 rice production at 28.6 million tonnes, up from 27.9 million the year before. The IGC points out Vietnam’s main crop is harvested in the first half of the following year.

Vietnam’s rice exports in calendar 2019 are forecast at 6.7 million tonnes, compared with 6.5 million the year before, making it one of the world’s five major exporters.

“Wheat is the second staple food, after rice, in Vietnam,” the USDA attaché in Hanoi explained in an annual report on the grains sector. “In large cities, people consume many wheat-based foods, and in recent years the demand for bread/baguette and other baked goods and wheat-based foods has risen.

“The changes reflect the increasing pace of urbanization and increasing familiarity of consumers with convenience foods. The growing presence of fast-food chains in Vietnam, such as McDonald’s, Dunkin’ Donuts, and Burger King; western-style cafes; and, the presence of foreign convenience stores, such as Circle K, Aeon, 7-Eleven, and GS 25, are also key factors in boosting the use of wheat-based foods.”

The trend to consume wheat-based foods is largely limited to the big cities, but it is spreading.

“As a result, the consumption of milling wheat is still small but has seen slight and steady increases,” the attaché said. “This includes an increase in demand for top-quality wheat used for higher quality wheat-based products introduced by western food outlets.”

That means a steady increase in demand for U.S. wheat. 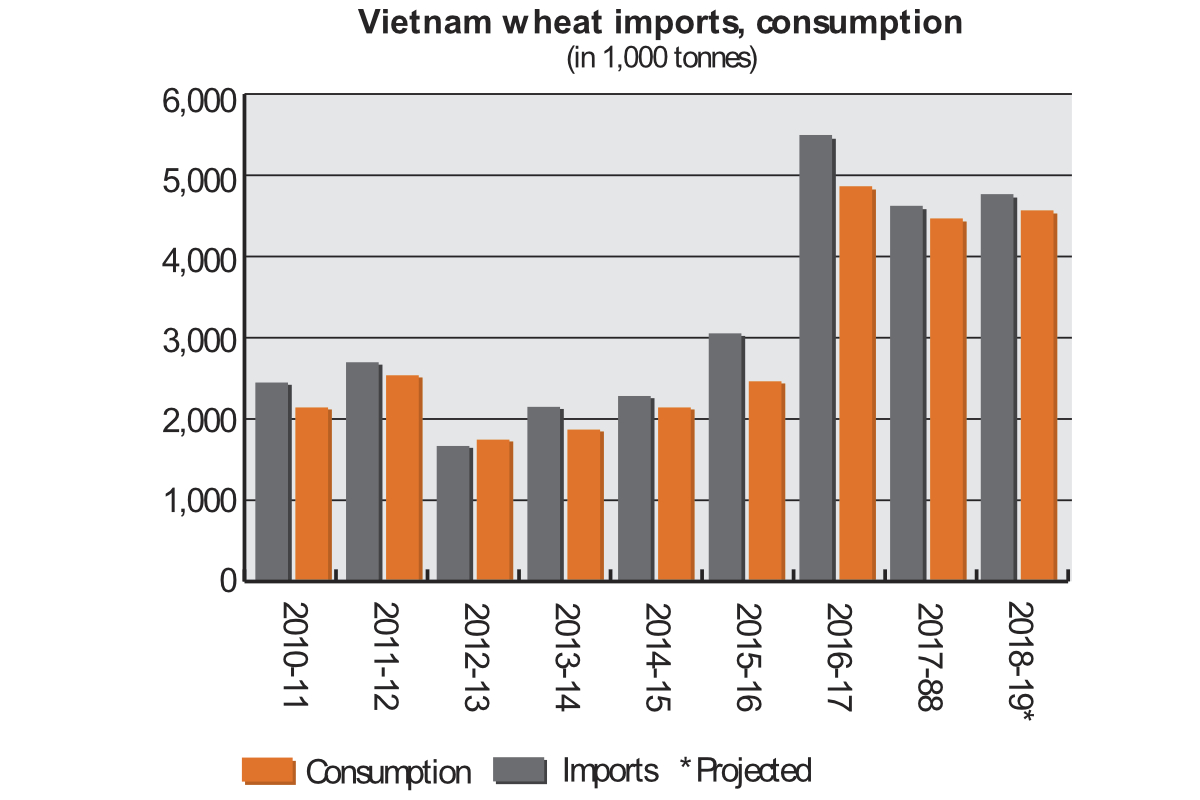 “Australian milling wheat has traditionally dominated the wheat import market in Vietnam,” the attaché said. “On average, Australian wheat accounts for over 70% to 80% of Vietnam’s total wheat imported volume.”

“This leads to strong competition in the wheat milling sector and also demonstrates industry is anticipating future wheat consumption growth,” the USDA said. “The Vietnam milling industry is expected to not only supply its milled flour domestically, but also regionally to other countries in Southeast Asia.”

Imported grains are of vital importance to the country’s big livestock industry.

“Vietnam is one of the world’s top pork consuming nations and stands second in Asia after China,” the attaché said. “Subsequently, the Vietnam hog industry is the key driver of the local feed industry.” 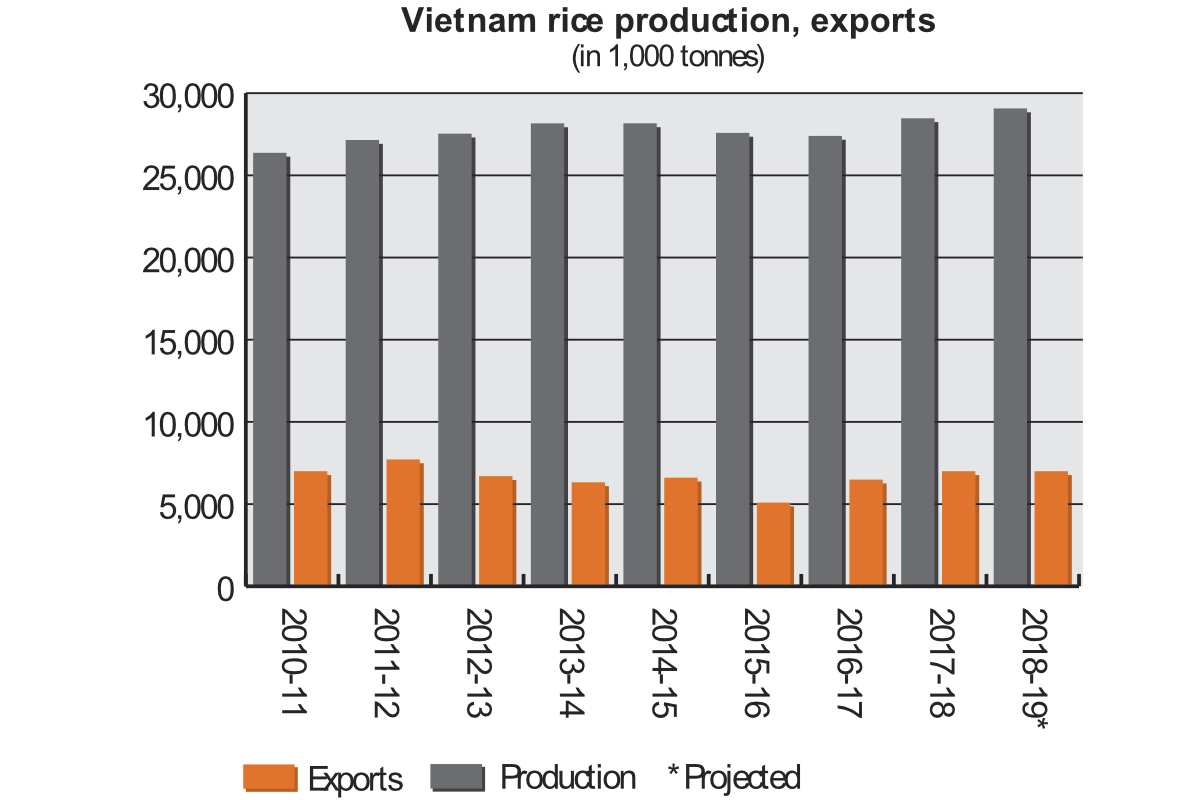 In 2016, pork prices fell below production costs, forcing many small farmers out of business.

“Currently, the market is only for big players with a more fully integrated production cycle, as they are able to continue production on a very tight margin,” the attaché said. “For corn, local producers are facing challenges from competitively-priced corn from major producers, such as Argentina and Brazil.”

World market corn prices have been lower than the domestic price since 2014 and the attaché forecast that imports of corn would rise. Feed wheat imports have risen in the past two seasons, but the attaché points out that wheat cannot totally replace corn in feed.

“Currently, due to the competitive price of feed wheat, it is becoming a crucial ingredient in producing compound feed for both aquaculture and livestock,” the report said.

“Vietnam’s decline in per capita rice consumption is consistent with other countries in Asia,” the attaché said. “As the economy develops, consumers have greater purchasing power and more access to other foods, and per capita consumption declines.”

The report cited data from the Food and Agriculture Organization (FAO) showing average rice consumption at about 145 kilograms. Even so, population increase, use in feed and use for processing, notably for beer and wine, means demand is rising by some 500,000 tonnes a year. The attaché pointed out that rice is one of the main ingredient sources for home-made feed for pigs, fish and poultry, especially in the Mekong River Delta area.

In an annual report on the sector, the attaché explained that Vietnam’s soybean production has been falling because of low yields and farmers switching to more profitable crops.

“Soybean production continues to fall well below the demand from the food, and livestock and aquaculture feed sectors,” the report said.

In 2017-18 and the year before, the United States remained the biggest exporter of soybeans to Vietnam.

In a report on agricultural biotech in Vietnam, published in December 2017, the attaché put the area of biotech crops in 2016 at 35,000, all of it corn, representing around 3% of cultivated area.

“Vietnam remains a major importer of key biotech plant products such as corn, DDGS, soybeans for animal feed production and cotton for textile industry,” the attaché noted in its report.