‘Lighthouse to the entire region’

AQABA, JORDAN — As one of the dominant flour milling companies in the Middle East, Al-Hazaa Investment Group is always looking to expand its footprint in the region, which has one of the world’s highest per capita wheat flour consumption rates. Its most recent expansion involved the construction of a new mill, known as the Ayla mill, in Aqaba, Jordan.

Jamal Al-Hazaa, chairman of Al-Hazaa Investment Group, which has more than 80 years of experience in flour milling, told World Grain the mill’s strategic location “will enhance the Group’s role in serving the local market and enhancing food security in the region.”

“Due to the fact that the southern region of Jordan didn’t have any milling facilities, and that the three main governates in the south of Jordan — Aqaba, Tafilah and Ma’an — used to completely depend on flour supplied by flour mills in Amman, more than 300 kilometers away, Al-Hazaa Investment Group saw an opportunity of establishing a flour mill in Aqaba,” Jamal Al-Hazaa said. “The establishment of this new mill in southern Jordan has reduced the burden of high transport costs of wheat flour from Amman to distant regions, that are far from the capital and the central region of Jordan where most flour mills are located.” 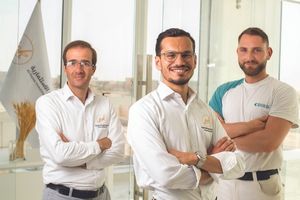 With daily production capacity of 240 tonnes, it is the only flour mill in the city of Aqaba (population: 188,000). Al-Hazaa celebrated the grand opening of the facility, which features the newest technology from Uzwil, Switzerland-based Bühler Group, on July 4.

Factoring into the Group’s decision to establish the mill in Aqaba was its strategic location near the Red Sea, which provides exporting opportunities, Jamal Al-Hazaa said.

“As Aqaba is Jordan’s only seaport, this location can facilitate and increase the Group’s flour export activities,” he said. “Hence, by building Ayla Flour Mill, we took into consideration having enough production capacity that can cover the needs of southern (Jordanian) markets in addition to specifying a share for export markets.”

With the opening of Ayla Mill, Al-Hazaa Investment Group is strengthening its presence in the Middle East by increasing its milling capacity to 5,000 tonnes per day and operating at three main Arabian ports in the region. The Group operates 12 milling facilities in four Middle Eastern countries — Iraq, Jordan, Egypt and UAE.

The additional mill in Jordan enhances the Group’s “competitive strength in the region and enables it to achieve a strategic goal of being a contributor to the region’s food security,” Jamal Al-Hazaa said.

Food security has become a major issue in the Middle East with Yemen, Syria and Lebanon ranked among the most food insecure countries in the world. The war between Russia and Ukraine, two of the world’s largest wheat exporters that annually ship a high percentage of their wheat to the Middle East, has further increased food insecurity in the region.

Fortunately, the company’s Jordanian mills haven’t been significantly impacted by the Russia-Ukraine conflict, which began on Feb. 24 and led to a five-month period when Ukraine was unable to ship grain out of its southern ports due to a Russian naval blockade.

“The Russian-Ukrainian war hasn’t affected the wheat supplies in Jordan because there were alternative options for wheat from Romania, Bulgaria and the European Union,” Jamal Al-Hazaa said. “The war’s main impact was on global wheat prices.”

The company chose to name it the Ayla Mill as the flour produced at the facility is being sold under the brand name “Ayla Flour.” Jamal Al-Hazaa said the new mill would produce several types of flour, including:

“We noticed a high demand for tortilla flour in recent years,” he said. “Consumers use tortilla bread for shawarma sandwiches. Therefore, at Ayla Mill we innovated a special flour according to specifications that will suit the needs of tortilla bread factories.”

The Ayla Mill also produces semolina, bran and pollard as byproducts of the milling process. All products are bagged under different weights, according to customers’ needs, and distributed mainly by truck, he said.

“Our primary customers are bakeries and factories in the southern provinces of Jordan,” Jamal Al-Hazaa said. “In the near future, we are planning to start exporting our products to several countries, especially since we are close to large flour importers such as Yemen, Somalia, Saudi Arabia and East African countries.

“In addition to the flourishing environment around the region of the Red Sea — especially with the Saudi construction of a new city that will link Saudi Arabia, Jordan and Egypt — the new city of Neom will be several kilometers away from Aqaba and will require high quality products that Ayla Mill can easily supply thanks to its state-of-the-art construction and top technologies implemented.” 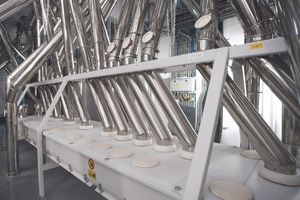 All spouting in the Ayla Mill is stainless steel to address food safety issues. Photo courtesy of Al-Hazaa.

Less than ideal time to build

The timing of the Ayla Mill construction project presented Al-Hazaa with the unprecedented challenge of trying to construct the mill during a global pandemic. Shortly after construction began, the project had to be halted as government and health officials urged lockdowns throughout the world to prevent the spread of the COVID-19 virus.

Social distancing requirements, supply chain delays and other logistical dilemmas related to the pandemic proved frustrating, but ultimately the project was completed two years after it began.

“In addition to stopping the construction work for some time, it caused a lot of other unforeseen delays,” Jamal Al-Hazaa said. “However, with the support of all of the involved entities, we were able to finalize the mill in 24 months.”

As frustrating as the delays were, Jamal Al-Hazaa noted that the pandemic-related challenges yielded some positive developments for the Group and the new facility.

“COVID drew our attention to the importance of work flexibility, to be able to work and operate your business from anywhere,” Jamal Al-Hazaa said. “It also proved the great importance of the Ayla Mill for the southern region after the difficulty we faced in transporting flour from Amman. At the same time, it encouraged us to build this mill based on high automation standards using only high-tech machines and choosing the best possible options to enable the operation of the mill remotely at all times, under any conditions.”

Teaming up with Bühler again

To equip the mill with the latest technology, Al-Hazaa turned to Bühler, an equipment supplier that it had teamed with on previous mill construction projects. Jamal Al-Hazaa described the Ayla Mill as “fully automatic starting from wheat intake until packing the final product.”

“We are honored to be part of this new project with Al-Hazaa, supporting them in keeping the focus on innovation, efficiency and quality,” said Marcel Scherrer, head of Bühler’s Wheat & Rye Business Unit. “Ayla Mill will play a key role in supplying superior quality flour in southern Jordan and other countries, improving food security in the region.” 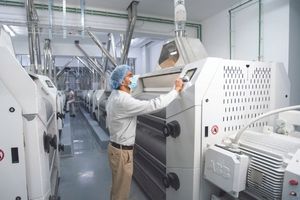 “Through our long partnership with Bühler that extends more than 40 years, we have succeeded in establishing another essential project, located on the Gulf of Aqaba, that will not only serve the Jordanian market but will be a lighthouse to the entire region,” Jamal Al-Hazaa said.

The facility, which covers 10,000 square meters and is six stories tall, features some of Bühler’s newest equipment lines, including the operation system Mercury MES, Diorit roller mills and Norit purifiers. It also is the first mill in Jordan to use the digital platform Bühler Insights, providing it with the latest data transparency and analytic tools to maintain optimal production efficiency 24 hours a day, seven days a week.

“This cloud solution enables the mill manager to monitor important KPIs (Key Performance Indicators) of mill production remotely,” Jamal Al-Hazaa said. “Ayla Mill is the first flour mill of Al-Hazaa Investment Group to be linked to Bühler Insight. We took this step because we believe in the importance of technological advancements in today’s business world, especially the food production field.”

He added that during the peak of the COVID-19 pandemic, the Group witnessed the positive impact the digital platform had when workers couldn’t reach their offices.

“Investing in finding the best solution to operate your plant remotely is fundamental not only for flour mills but for all businesses, especially in the food production industry, to ensure safe food production and continuous operation at all times and under any circumstances to secure essential food products to customers.”

Bühler equipment is present throughout the mill, from intake to the packaging of the product.

“For the cleaning section, we used Bühler’s Sortex optical sorters, then grains pass through a great system of sieving and sifting that happens through Bühler’s trieurs and scourer,” Jamal Al-Hazaa said. “For the milling section, we installed the newest generation of the MDDY Diorit roller mills with touchscreen displays that enable the miller to directly monitor the milling process. The flour then passes through Bühler’s plansifters and the Norit purifiers to ensure the production of best-quality products under top hygiene levels.”

He noted that all pipes and spouting in the Ayla Mill are stainless steel to address food safety issues. Product safety and operating in an environmentally friendly manner are two of Al-Hazaa Investment Group’s highest priorities. 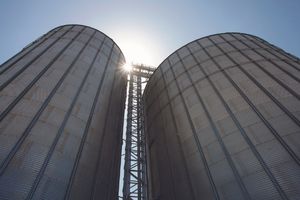 “All of our mills are accredited with international food safety certificates,” Jamal Al-Hazaa said. “Furthermore, Al-Hazaa Investment Group owns the largest private-use solar plant in Jordan, which supplies all its facilities in the country with clean renewable energy, making the Group the largest environmentally-friendly food producer in the country producing vital food commodities with zero carbon emissions.”

The mill’s quality assurance instruments used in the lab section were supplied by PerkinElmer and Chopin. Among the equipment supplied by PerkinElmer was the Glutomatic, Inframatic and lab mill 3310, while Chopin delivered its SDmatic, Muffle furnace MLI1100 and EM10 oven to measure starch damage, moisture content and ash rate.

“The fully integrated lab will offer full analysis on grains and flour to ensure the production of high and consistent quality products,” Jamal Al-Hazaa said.

The bagging system packs flour in 25- or 50-kg sacks for delivery to its customers in the region.

Symaga installed two grain silos for wheat storage, each with 5,000 tonnes of storage capacity. Al-Hazaa will source wheat for the Ayla Mill from a wide variety of sources.

“We source our wheat from different origins, based on the end products we wish to produce,” Jamal Al-Hazaa said. “At Ayla Mill, our main focus is on covering the needs of bakeries in the South of Jordan. We use the milling wheat that is used to produce the Arabic bread, which is consumed in large quantities in Middle Eastern countries.”