We use cookies to provide you with a better experience. By continuing to browse the site you are agreeing to our use of cookies in accordance with our Cookie Policy.
Home » Feed Ops: Creating a batching system

I have been writing a series of articles on feed mill design and a specific mill. In the April 2018 issue, we looked at the amount of feed made per hour and added an 80% efficiency factor to determine a design capacity of 75 tons per hour was needed to support the production requirements at the beginning and in the future. It is important that we design the batching and mixing system for current and future needs as a mill usually has only one main batching and mixing system. Although additional ingredient bins may be added in the future, the scaling and mixing equipment needs to be designed to support the ultimate production requirements.

In the May 2018 issue, I introduced two generic feed formulations: one for a Starter/Grower-Broiler (Medicated) feed, and the other for a Generic 18% Swine Starter Pelleted feed. I identified which ingredients in each formulation were stored in overhead bins and batched through the main batching and mixing system. The smaller dry ingredients were to be batched and added through a separate micro-ingredient batching system. Each of the formulas were to be produced in a 7,000-pound (3.5-ton) batch.

In this article, I will show how to size the overhead bin screw feeders to support the 75-tph production design capacity required. First, we need to determine the time allowed to make a batch. In this design, the mixer used has a complete drop bottom outlet for quick and complete discharge of a batch. This requires a surge bin beneath the mixer to hold a complete mixed batch. Dividing the 75 tons per hour required production rate by the size of a batch (3.5 tons), we determine that an average of 24.1 batches need to be produced per hour. To determine the time needed for making each batch, divide the number of minutes in an hour (60 minutes) by 24.1 batches per hour and you will get a time of 2.8 minutes required per cycle. This converts to 168 seconds. 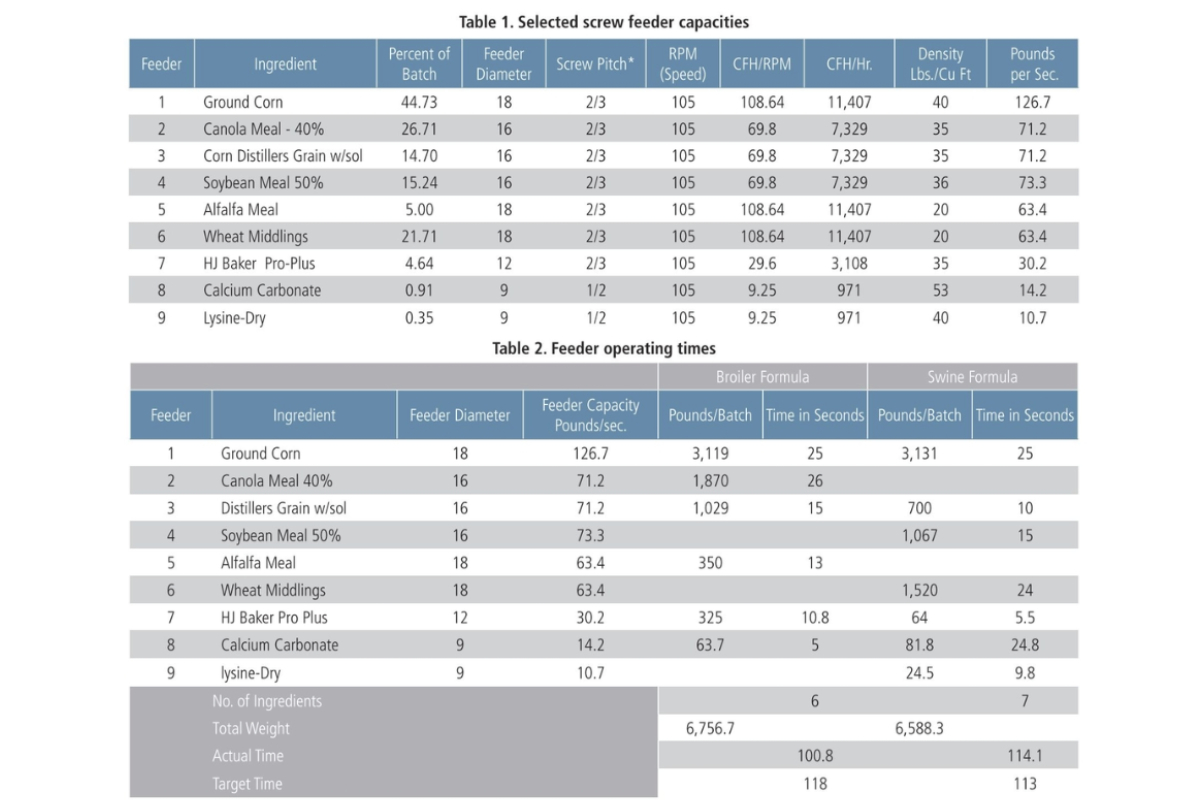 Here, we need to make some assumptions. First, we will allow 10 seconds for the batching scale to completely discharge into the mixer. Second, it takes the mixer 10 seconds to empty and be ready for the next batch. And third, the ingredient feeders have 5-second intervals between each ingredient so the batch scale can confirm the amount of each ingredient in the scale hopper before the next ingredient is added.

Using the above information, we can determine what I call a “target time” for charging the ingredients into the scale hopper. Let’s assume we are batching five ingredients in the batching scale for a given formula and we need to determine the target time (total time) available for the feeders to run.

Target Time for Feeders to Run

Now we will look at an example of how to select the required feeder size and running time needed for each ingredient, so the total target time isn’t exceeded. I normally use speeds of 105 rpm at two-thirds pitch on feeders and one-half pitch on smaller feeders. Let’s look at the ground corn feeder. Ground corn is approximately 45% of either formula. The corn feeder would need to discharge the amount of corn needed into the scale in about 45% of the target time, which would be about 50 seconds. An 18-inch feeder has a capacity of 108.64 cfh/rpm at two-thirds pitch.

With this approach, I selected the size of feeder for each ingredient to be used with each feeder capacity as shown in Table 1. Determining screwer feed capacities requires trying several sizes of feeder for the ingredients. Feeders are volume metering and density affects the volume of ingredient needed.

Using the feeder capacities per second for each ingredient from Table 1, the number of seconds needed for each ingredient in a formula may be determined. The sum of these times should not exceed the target time for that formula. Table 2 shows the total feeder running times for each formula. It also shows that the total feeder run time for the broiler formula is 100.8 seconds, which is less than the target time of 118 seconds. The swine formula feeders time totaled required 114.1 seconds. This was slightly over the target time of 113 seconds. This would be acceptable, as design capacity for the facility is 75 tph, but the required capacity is 60 tph. Using this method, Tables 1 and 2 can be developed for each formula used in a plant. Formulas should be able to be batched within the target times. Seldom used formulas may exceed the target times allowed, but the frequently used formulas should be able to be batched and mixed within the target time calculated for those formulas.