In previous articles we have determined batching and mixing cycle times, capacity and size of feeders from the ingredients stored in the overhead bins, batching scale capacity, and mixer capacity for the two formulations we introduced in the May 2018 article.

In this article we will complete the design of the batching and mixing system for the addition of the micro-ingredients and the liquid ingredients needed to complete the formulations being produced.

A micro-system is a small self-contained batching system with compartments for the individual ingredients added to formulas in small amounts. Each compartment usually holds two to three bags of an ingredient. Each compartment has a miniature screw feeder that meters each ingredient into a common long-scale hopper that discharges into a drag conveyor that transfers the micro-ingredient batch directly to the mixer.

The micro-system weighs up the micro-ingredients while the overhead bins ingredients are being batched in the large batching scale hopper.

This eliminates air pressures and surges that occurred in the mixing system so they do not affect the micro-system when the micro-ingredients are being weighed.

A second type of micro-system has each compartment mounted on its own scale, which operates as a loss-in-weight feeder. With this system, each needed ingredient is measured individually into the transfer conveyor to the mixer.

One advantage of this system is that an inventory of the amount of ingredient in each compartment is always available.

For this facility, I would recommend a micro-system with a minimum of 14 to 16 compartments.

In some cases, the amount of a micro-ingredient needed in a formula may be very small. In this case, that ingredient may be hand added into the mixer.

In some cases, it is desirable to flush the micro-ingredient system transfer conveyor to the mixer. This can be done by having a charge of ground corn spouted to an inlet to the conveyor mounted prior to the point where the ingredients are added.

After the micro-ingredients in a formula have been transferred to the mixer, ground corn is passed through length of the transfer conveyor into the mixer.

The amount of corn used for flushing is deducted from the amount of ground corn put in the large batching scale. 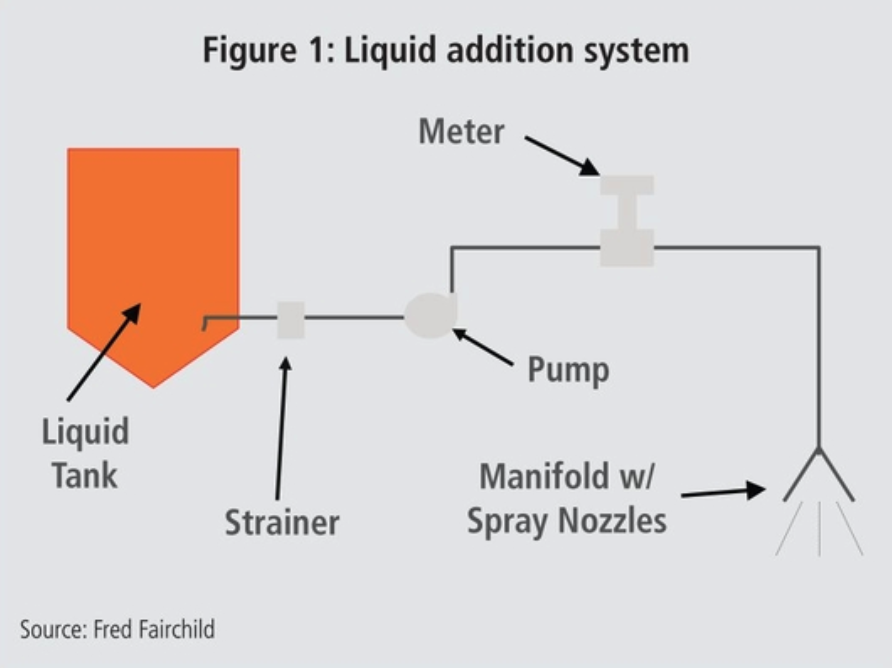 Two main liquids are used in the formulas: vegetable fat and molasses. Both are bought in bulk and added to the formula in the mixer. First, the dry ingredients and micro-ingredients are discharged into the mixer and blended together. This is called the dry mixing time.

This is followed by the addition of the liquids into the mixer and are blended with the dry ingredients. This is called the wet mixing time. Both of these mixing activities must be completed within the cycle time allowed for mixing the formula.

The liquids should be sprayed into the mixer through a manifold of properly sized spray nozzles. This allows for multiple liquid addition points along the length of the mixing chamber.

The liquids are sprayed into the mixer through a manifold that has multiple branches that spray the liquids into the length of the mixing area. The spray heads in the mixer must be located so the liquid is added directly into the mix and not directly on to any mixer surface.

For twin rotor mixers, the liquid is sprayed from the center of the top into the mixer. A separate liquid system is used for each different liquid used in a facility.

Therefore, if more than one liquid is used at the facility, separate manifolds are installed in the mixer for each liquid.

A basic liquid addition system is shown in Figure 1. The three main elements of the system are a variable speed positive displacement pump, a meter and a manifold of outlets with spray nozzles.

The pump speed is set to control the liquid addition rate so that the liquid is sprayed on to the dry mixed product in the time needed for the wet/dry mixing.

The meter in the system should be one that measures mass flow and can control the pump to stop when the required amount of liquid passes through it. This will allow that only the amount of liquid required is sent to the mixer.

A third liquid used in the broiler formula is Alimet-88%. The Alimet has a separate liquid system provided by the supplier.

In this article, I have not attempted to completely design and show all the piping, sensors, valves, strainers and other parts that would be used in the complete liquid system design and needed for the liquid system. I have only addressed the parts needed to control the spray of the liquid into the mixer.

When the dry ingredients are cold and the warm molasses or oil is sprayed on to the mix in the mixer, the fat or molasses may not disperse completely.

The liquids may congeal into small balls of product before spreading evenly through the mix. There may be other problems if the formulas are too wet and balls of feed are formed. There might also be pieces of product that break loose from the mixer surface. To make sure the mixed product is uniform, a feed screener designed for eliminating oversized particles from the mixing operation. This is a specially designed screener for the feed screening.

In upcoming articles, I will discuss a pelleting system for the feed facility.