LILONGWE, MALAWI — Few places depend on maize cultivation as much as Malawi, one of the world’s poorest countries. Around 80% of households are rural, and most of them grow rainfed white maize on plots averaging just one hectare, primarily for their own subsistence but also to generate some cash.

Thanks to timely rainfall, a record crop of 4.2 million tonnes in the 2020-21 growing season was more than enough to feed the population of 20.8 million, even allowing some surplus for exports and to boost government reserves.

Nevertheless, overall production has increased only marginally in the last 15 years. From 2017 to 2021 the average annual maize harvest was 3.4 million tonnes versus 3.3 million tonnes in the period from 2007 to 2011.

During the same period, the number of Malawians has expanded by over 50%.Current population growth rate of 2.3% is among the highest globally, even though Malawi is already one of the most densely inhabited African nations. Its population is 7% larger than neighboring Zambia’s but with only 16% of the land area, even when including the one-fifth that is Lake Malawi, Africa’s third largest freshwater body.

The country’s democratically elected government has a long history of supporting maize production with two major forms of subsidy: fertilizer distribution and maize procurement at a minimum support price.

The Agricultural Development and Marketing Corp. (ADMARC) is the state-owned entity that is charged with buying maize from farmers at a minimum support price.Thanks to a bumper crop, the parastatal managed to procure 240,000 tonnes in its fiscal year ended March 31, 2022. 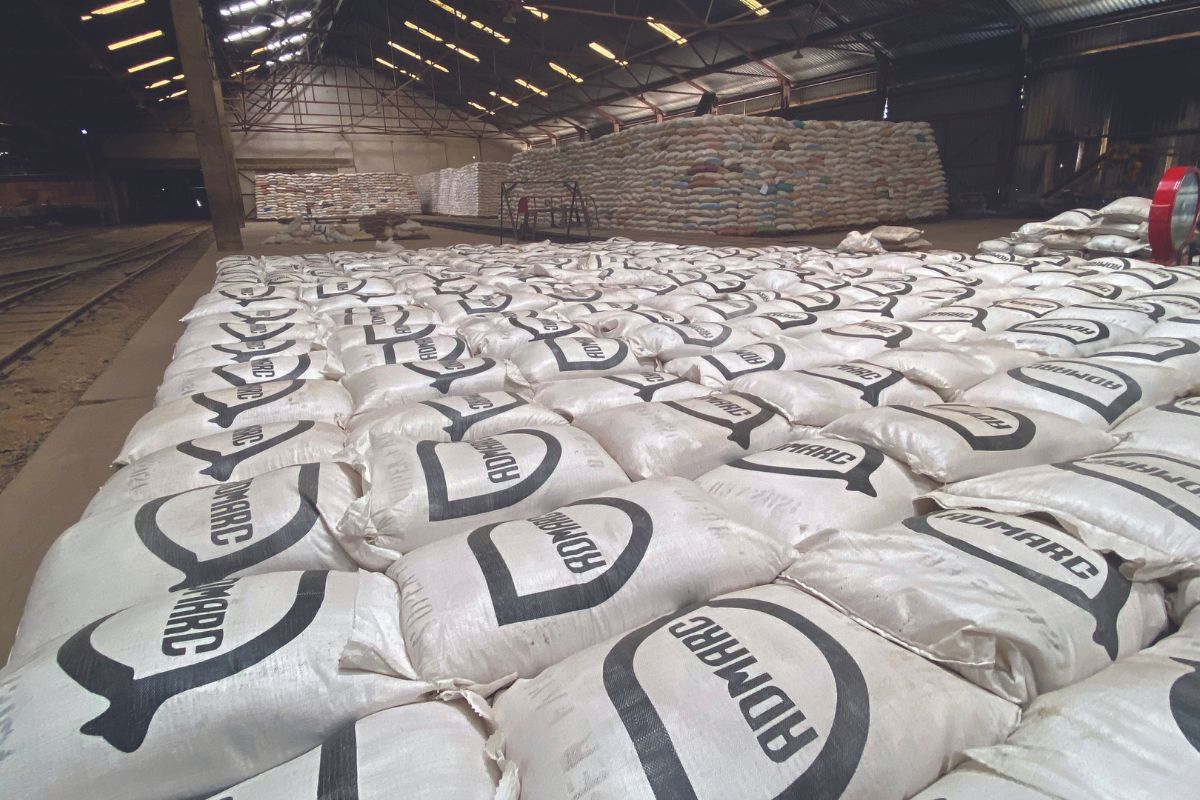 One of ADMARC’s largest warehouses is situated in Liwonde, a rail transport hub for grain and fertilizer in the center of Malawi. Photo courtesy of David McKee.

Ideally the procurement should be done when prices are falling during the harvest period that starts in March and April.But the reality is that every year ADMARC, which has chronic funding difficulties, only starts buying in earnest months after the harvest when prices already are rising during the lean season. Most of the maize comes from private traders who accumulate speculative stocks from cash-hungry farmers at the time of harvest when prices were lowest.

At least every few years the government must bail out ADMARC to repay its short-term commercial bank borrowings. Already in early 2022 the new general manager, Rhino Chipiko, was asking the government for a kwacha 50 billion (US$40 million) bailout in order to recapitalize after years of operating losses, very often resulting from fraudulent trading and insider dealings.

ADMARC owns the largest network of warehouses in the country, totaling 300,000 tonnes of storage capacity at 400 sites. However, most of these sites are uneconomical due to remote locations and low volumes of maize and other crops delivered.Only the dozen or so large warehouse sites constituting district hubs are commercially viable.

A separate entity, the National Food Reserve Agency (NFRA), can store emergency and market intervention stocks of up to 180,000 tonnes in its massive concrete silo complex built in 1979 outside of Lilongwe. However only two-thirds of the silo capacity is usable, and two of the three NFRA regional storage sites, with 20,000 tonnes of steel silo capacity each, have never operated since construction nearly 10 years ago.

It is fortunate that the government is holding its largest maize reserve stocks in years. In April, the Ministry of Agriculture estimated the 2022 maize crop at just 3.1 million tonnes due to the lowest precipitation recorded in decades during the October to January onset of the rainy season combined with a crop destroyed by subsequent flooding. Lower fertilizer application due to skyrocketing prices also will contribute to a smaller crop.

Malawi’s nutrient-weak soil needs enrichment to support the intensive farming needed for a growing population. The government has had schemes in place to subsidize fertilizer distribution for many years.

However, current President Lazarus Chakwera, leader of a coalition government elected to power in 2020, made a populist campaign pledge to triple the subsidy by providing two 50-kg bags of fertilizer at around $5 each to all of 3.7 million registered farm households. The cost of the subsidy to the government was about 70% of the per bag cost.

A major success of the subsidy scheme from the standpoint of the private sector suppliers was the use of a digitalized national identity card scheme to record sales of the fertilizer to the authorized beneficiaries.

In the current year, following a doubling of the international fertilizer price, the scheme was scaled back, and actual distribution reached only a fraction of the intended beneficiaries by the onset of the rainy season.

International development partners, including the World Bank, International Monetary Fund (IMF) and donor nations have been critical of the corruption-prone maize and fertilizer subsidies, maintaining the money would be better spent on basic government services such as health, education and roads.

To many informed observers, preoccupation with maize monoculture, despite low yields and prices, is helping to keep Malawi impoverished. Agricultural diversification as a path to development is a major focus for the government with support from World Bank lending and other international development partners.

The entire soybean value chain has become a bright spot thanks to both surging domestic and export demand. 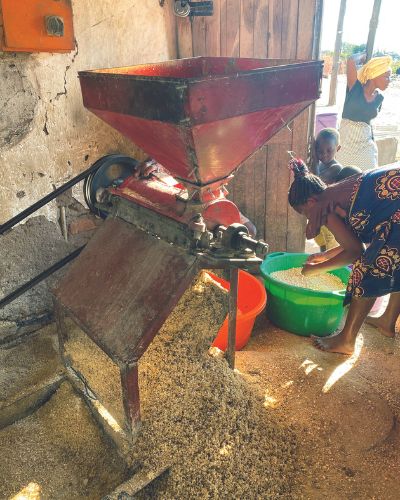 Rural families take their maize to small mills such as this one in Cape Maclear village where they pay a grinding fee. Photo courtesy of David McKee.

In recent years, soybeans have begun to figure more significantly in Malawians diets. Feed milling has been expanding to meet demand for egg and chicken meats. The biggest poultry company, Capital Foods, is the largest buyer of maize in the country along with ADMARC, but also needs significant quantities of soybeans for animal feed production.

There are now at least eight companies producing textured soy pieces. It was introduced by Export Trading Group as a new food product over 10 years ago to be enjoyed as a low-cost relish high in vegetable proteins to accompany the standard fare of maize meal a couple times per day. Daily soybean equivalent requirement of these processors has grown to a few hundred tonnes. Soybean oil for human consumption and substandard beans and soy pieces for use in animal feed are valuable byproducts.

Export demand for soybeans posed a challenge to the domestic processors in 2021.A short crop in India led to CIF Mumbai prices climbing to over $1,000 per tonne in August 2021 before collapsing. Traders in Malawi paid steadily higher prices throughout the summer and into the fall to buy up the last remaining quantities to fill the demand.

Much of these export quantities may have originated in Zambia and Mozambique, where oilseed processors through their associations can veto legal soybean exports but can do little to stop the informal trade across porous borders. The Malawian exporters struggled to find enough trucks and containers to move the several thousand tons of soybeans from the landlocked country to Nacala and Beira ports in Mozambique and to Dar es Salaam for shipment to Mumbai.

Thanks to a price at 2.5 times that of maize, farmers are bound to plant more soybeans and less maize, accelerating the trend of export led agricultural diversification. The challenge is to increase productivity and yields.

The pending commercial release of new soybean varieties, developed in a five-year USAID funded project, has the potential to more than double yields from less than two tonnes per hectare to over four tonnes among large commercial farmers.

Some of Malawi’s largest tobacco producers have been key participants in the trials for the soybean breeding project. For decades, tobacco leaf has been Malawi’s largest source of export revenues, and even with today’s globally depressed prices, it still accounts for around half, bringing in up to $200 million in hard currency per year. But the big estates need alternative large-scale cash crops for export. Soy has great promise to play that role, thanks to steadily growing domestic and international markets, especially India where animal feed demand is growing steadily.

One of the biggest challenges to Malawi’s export-led development is high transport costs of agricultural products to ocean ports.

The Nacala rail corridor offers some of the best potential for upgrading infrastructure. The railroad was rebuilt 10 years ago by the Brazilian mining giant, Vale, to move coal from its newly developed mines in the Tete region of northwestern Mozambique to Nacala, Mozambique, while cutting across the southern part of Malawi.

The biggest user of this railway for movement of agricultural commodities is Bakhresa Group, East Africa’s regional flour milling hegemon. The company uses grain hopper wagons to transport two trainloads per week of bulk wheat directly to its plant in Blantyre, in the south of the country, where the grain is discharged directly from a rail siding inside the milling complex into silos.

Bakhresa owns a steel silo grain terminal with 30,000 tonnes of storage capacity directly on the Nacala port where the railcars are loaded.

Bakhresa and its two smaller flour milling competitors import around 180,000 tonnes of wheat per year, with the lion’s share coming through Nacala. The volumes in recent years have stagnated due to illegal competition of flour smuggled across the border from Mozambique and Tanzania, which do not have the same 16.5% VAT tax on flour production that Malawi’s government imposes. The illegal imports may be as much as 40% of Malawian consumption, according to one industry source.

Along with soybeans, a niche commodity with much potential for expansion is pigeon peas. Again India, which accounts for 90% production of the legume, is the crucial player.

Malawi was one of Bakhresa’s first mill investments outside of Tanzania. The mill was acquired from ADMARC around 1995 during an economically difficult period when the World Bank and IMF were pressuring the parastatal to privatize a number of major non-core assets.

Ideally, the bulk railcars bringing wheat and fertilizer to Malawi would not return to Nacala empty as happens most of the time now, but rather would efficiently haul Malawian commodities like maize and soybeans for bulk export in vessels.

Though the commodities are available, and the overseas demand exists, such transport is not yet feasible. At the Nacala port there is no bulk storage capacity for agricultural commodities and no mechanical bulk ship loading equipment except for coal. In Malawi, there are few facilities for loading maize and soybeans from silos directly into bulk railcars.

Along with soybeans, a niche commodity with much potential for expansion is pigeon peas. Again India, which accounts for 90% production of the legume, is the crucial player. In 2021, Malawi and India signed a bilateral agreement under which India will open its normally closed market to 60,000 tonnes of pigeon peas and dhal equivalent per year.

There are numerous leading Malawian agribusiness companies already processing pigeon peas into a premium dhal product for export to a range of countries where there is a large Indian diaspora, even while the Indian market remained closed. Much excess dhal capacity exists in Malawi and neighboring Mozambique.The record-high prices paid by traders acquiring pigeon peas in 2021 in anticipation of an opening of the Indian market will result in more small farmers planting it.

Most production is in the more densely populated south of the country, where women farmers intercrop it with maize, which is harvested first leaving room for the pigeon pea bushes to grow and mature for picking a couple months after the maize stalks are gone. Malawians consume very little of the legume, making it predominantly a cash crop for export. But prices have been subject to extreme international market volatility in some years, particularly when India opens and closes it market to protect its own smallholder growers.