The focus of Germany’s economy is on industrial production, but the country is also one of Europe’s leading producers of grains and oilseeds.

As a Member State of the European Union, Germany’s overall farm policy is set under the E.U.’s Common Agricultural Policy (CAP), in the direction of which German Agriculture Ministers and German Members of the European Parliament play a role. The CAP is set for a 2020 reform that will give individual countries a bigger role in deciding how strategic objectives are applied domestically. Germany’s production of grain and oilseeds was affected dramatically by dry weather in 2018, something which, having hit plantings as well as the old crop, will also mean lower production in 2019.

Forecast sharp rises for 2019-20 reflect a particularly poor 2018-19 crop, because of dry conditions. The German farmers’ union, DBV, which put the crop at 35.6 million tonnes in total, issued a statement at the time of the harvest calling for action to help farmers.

The drought meant that wheat yields averaged 6.4 tonnes a hectare, DBV said, compared with the previous year’s 7.7 tonnes. The average for 2013 to 2017 was 8 tonnes on an area of 2.9 million hectares. By DBV’s figures, this meant a winter wheat crop of 18.6 million tonnes, compared with 24.1 million the year before.

Winter rye is an important crop in the badly drought affected areas of northeast Germany. The union put the yield at 4.1 tonnes a hectare, compared with 5.1 tonnes the year before and an average over the previous five years of 5.7 tonnes. They expected the rye crop to come out at 2.1 million tonnes, compared with 2.7 million the year before.

Germany’s production of rapeseed is forecast by the IGC at 3 million tonnes in 2019-20, down from 3.7 million the year before. The annual attaché report on the oilseeds sector in the E.U.-28 noted area reduced sharply in Germany because of dry conditions in 2018-19. The crop that year compared with 4.3 million the year before. The same prolonged dry weather is responsible for a sharp fall in area for 2019 harvest, hence the again reduced forecast for 2019-20. On the usage of soybeans, the report pointed out that meal demand is trending downward due to a crisis in the pork sector driven by African swine fever and falling demand. 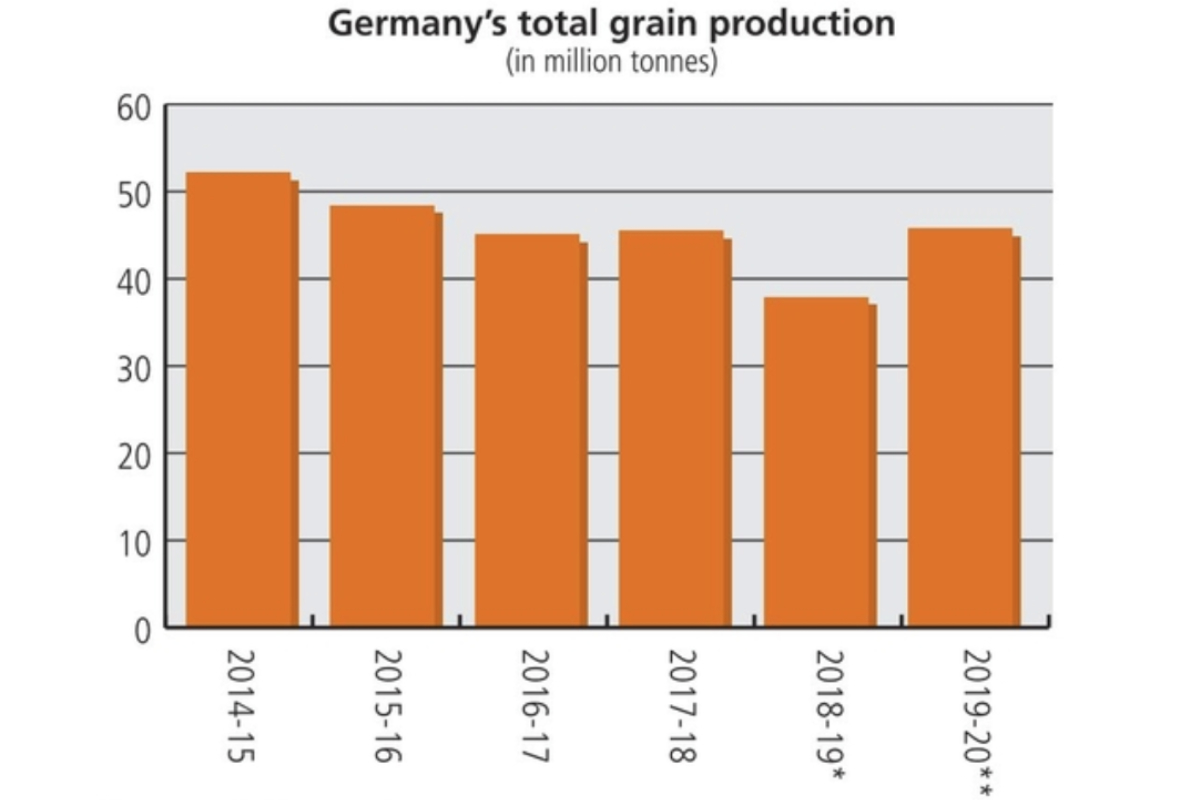 According to the European Flour Milling Association, Germany had 205 mills in 2017. The number has been falling steadily. For example, there were 317 mills in 2007. Of the total, 29 have a production capacity of over 100,000 tonnes (wheat equivalent) per year.

The European Flour Milling Association’s figures are based on official statistics that ignore mills with an annual capacity of less than 1,000 tonnes. The industry association Verband Deutscher Mühlen put the total as of January 2019 at 550 mills, 196 of which have a capacity of over 1,000 tonnes a year. The association highlighted the progressive consolidation of the industry by pointing out that there were almost 19,000 mills in the country in 1950, a number that fell to around 2,500 by 1980, before falling again to its current level.

The industry is somewhat concentrated in the southern states of Germany, notably Bavaria, Baden-Württemberg, Rheinland-Palatinate and Saarland. The German association pointed out that in the south — Bavaria and Baden-Württemberg — each mill serves 173,637 inhabitants on average. In the north — Lower Saxony, Bremen, Schleswig-Holstein, Hamburg — the average is one mill per 551,155 residents.

According to the cereals sector market research organization GMF, 89% of Germans regularly eat bread or rolls. At Green Week in Berlin in January, they released survey results showing fresh fruit and vegetables came next at 85% followed by dairy products at 83%. Based on annual production figures, they put per capita consumption in 2017-18 at 80.9 kilograms. The level has been stable at between 80 and 86 kilograms for the last 20 years, with fluctuations at plus or minus 4% a year. The mean for the period since German reunification in 1990 has been 83 kilograms a year.

Germany is the E.U.’s largest consumer of fuel ethanol, getting through a total 1.486 billion liters in 2018, according to the USDA attaché.

“In 2017, German ethanol production decreased by 8.8%,” a report on the E.U. biofuels sector said. “The German Bioethanol Industry Association attributes the decline to a lower German consumption of E10 versus E5 gasoline and lower ETBE use. A slight recovery is forecast for 2018.”

German consumption of biodiesel in 2018 is forecast at 2.540 billion liters, second in the E.U. to France with 3.025 billion. Germany is the E.U.’s largest producer of FAME (fatty acid methyl ester) biodiesel, with a 2018 forecast of 2.610 billion liters. Biofuel use in Germany is mandated based on the greenhouse gas savings compared to fossil fuel, at a level of 6%.

German public opinion remains strongly anti-biotech, even though the country is home to some of the world’s leading companies in the sector.

“Public rejection of genetically engineered (GE) plants in Germany is widespread,” an attaché report on the issue said. “There is no commercial GE crop production and practically no foods labeled as Genetically Modified Organisms (GMO) on the market. Despite this, Germany is home to world-class companies that develop and supply GE seeds globally.”

With public opposition to genetic engineering running at a steady 80%, the attaché sees little prospect of the market opening to GM crops. Germany does, however, import GM soy to use as animal feed.