We use cookies to provide you with a better experience. By continuing to browse the site you are agreeing to our use of cookies in accordance with our Cookie Policy.
Home » U.S. soft red winter wheat output forecast lower

If the forecast is realized, soft red winter wheat production will have decreased in six consecutive years from the recent high production of 568 million bushels in 2013. The 2019 crop also would be the smallest since 219 million bushels in 2010, and with the exception of that year’s crop, would be the smallest soft red winter wheat outturn in records extending back to 1984.

Production was forecast to be down from 2018 in the Central states, the Mid-Atlantic states and the Southeast. Decreases forecast for those states more than offset production gains forecast for the Midwest states as well as across much of the South and Delta states.

“Planting got off to a good pace last fall, and intentions were to plant more acres.  Then came the rain, and planting came to a halt,” Van Hoose said. “Some of the wheat in Indiana and Ohio that had just been planted had water damage before it even got a very good stand. Rains were on and off from then on, and planting was tough at best. 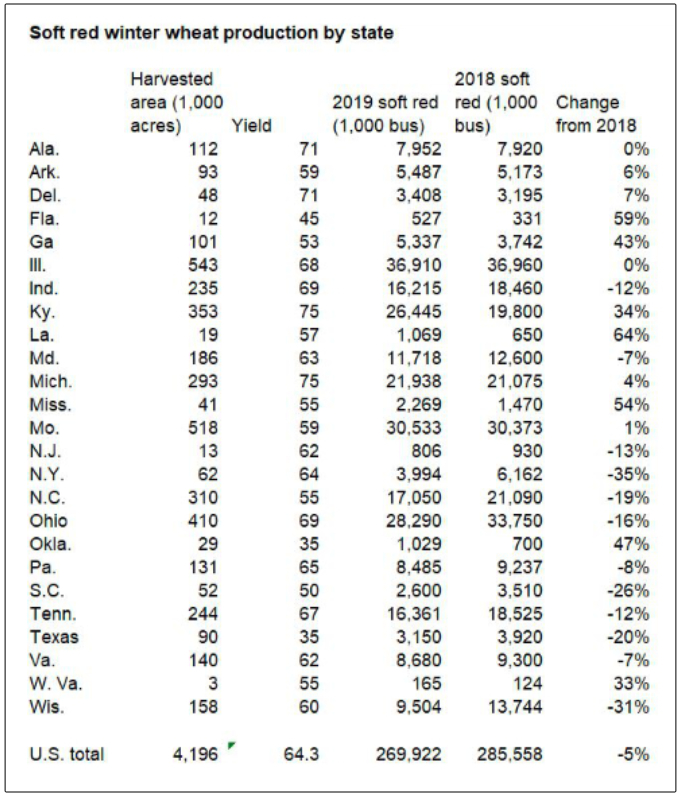 “Fall planting and emergence in Michigan was behind. The U.S. Department of Agriculture’s Oct. 21 Crop Progress report showed wheat at 46% emerged, 20 percentage points behind the average. Michigan has had good snow cover over the winter,” Van Hoose observed.

“In the same report, Indiana and Ohio wheat was in better shape. Indiana was 4 percentage points ahead of the average emergence at 58%. Ohio was 4 percentage points behind the average at 60%,” Van Hoose said. “Indiana and Ohio have not had good snow cover at critical periods when needed. There has been a lot of ponding and ice. Ninety percent of the crop that was planted in Wisconsin was planted late; it had little fall growth and has been wet. Abandonment is expected to be above average.”

Van Hoose trimmed planted area estimates as contained in the USDA’s Winter Wheat and Canola Seedings report issued Feb. 9 for Indiana and Wisconsin. He estimated Indiana winter planted area at 294,500 acres versus 300,000 as estimated by the USDA He estimated Wisconsin winter wheat area at 200,000 acres compared with the USDA estimate of 215,000 acres.

“Winter wheat in the Northeast got off to an earlier start than in 2017, but then started getting delayed as the weather patterns shifted wetter,” Branstetter said.

“There are a few common themes that developed when talking to farmers in the Northeast,” he continued. “The first being they had intentions to plant more wheat than what they were actually able to plant, and the second being the wheat that was planted either was planted later than they would have preferred and/or what was planted was mudded or scraped in.

Branstetter said The Andersons has an elevator and merchandising office in New York, and their observations based on discussions with producers were that planted acreage in the state may be down as much as 50% or 60% from last year. In light of these discussions, Branstetter decided to lower his New York winter wheat planted area estimate down about 30% from last year, to 77,000 acres. Even with the reduction, Branstetter noted his production forecast for New York may be overstated especially if acreage proves to be even lower.

“There has also been a lot of talk from producers about their unwillingness to throw additional money at this crop,” Branstetter said. “With the recent slide in flat price, producers are talking about not applying fungicide and fertilizer in the spring, which could lead to issues with quality and potential yield at harvest time.”

Schwinke projected the Illinois crop at 36,910,400 bushels, down 49,600 bushels from 2018. He noted a turn to wet weather and growers’ assigning a greater priority to completing their corn and soybean harvests largely ended winter wheat planting by the last week in October. Without the turn in the weather, growers would have planted more wheat. Schwinke said Illinois farmers have provided the crop its first shot of nitrogen in many areas. The crop would benefit from drier weather in the near term, he said.

Missouri weather during the fall and winter was wet, and winter weather was cold, Schwinke observed. Conditions in the bootheel of the state were very wet with some water washing back across some fields along rivers. Wheat was just emerging from dormancy in central and northern Missouri. “The winter was tough, but the crop should come through,” he said. Schwinke forecast the Missouri crop at 30,532,500 bushels, up 159,500 bushels from 30,373,000 bushels in 2018.

Doering noted producers’ thoughts last fall were to get the fall crops harvested quickly and plant a lot of wheat. Wheat prices relative to row crops at that time were “tremendous” with wheat prices then about $1.50 to $1.60 a bushel over corn, and the price relationship with soybeans also was favorable, he said. But then came the seemingly endless rain. A lot of the area intended for wheat in the region went unplanted.

Doering said it’s often the case in the Southeast that farmers plant wheat as a potential harvest but in the spring see how the crop looks and consider its price relative to those of other crop options. Weather during the fall and winter didn’t cooperate, and prices more recently also haven’t been favorable to harvesting a full wheat crop, which may see abandonment of wheat acres high in the region. Doering also commented that there may be less double-cropping of wheat with soybeans this year because of the difficulties encountered by producers during the late harvest of the double-cropped soybeans in 2018.

Rossol said it was too wet last fall for Tennessee growers to plant all the wheat acres they intended. Low-lying areas in the state have been too wet for growers to treat their crop. Spring flooding was expected to be a problem in these areas. Farmers on higher ground were faring much better.