We use cookies to provide you with a better experience. By continuing to browse the site you are agreeing to our use of cookies in accordance with our Cookie Policy.
Home » High prices haven’t stopped organics growth — yet

KANSAS CITY, MISSOURI, US — Steady growth and continuous demand have defined the organics market for several decades. In 2020, during the height of the COVID pandemic, total sales of organic food and non-food products garnered more than $60 billion, according to a 2021 Organic Industry Survey released by the Organic Trade Association.

But analysts from Mercaris, a market information service and online trading platform for organic and other identity-preserved commodities and ingredients, wondered how the organics market will handle current economic trends. Kellee James, founder and chief executive officer of Mercaris, and Ryan Koory, vice president of economics at Mercaris, presented their insights and outlooks during a breakout session at the Sosland Publishing Co. annual Purchasing Seminar in early June.

Koory said organic food sales in the United States grew by 13% in 2020, reasoning that sales reflected consumers’ retail purchases, where consumers have greater access to and buying power for organic products, since other food opportunities, like restaurants and schools, were closed. Koory said post-pandemic consumer behavior has not reset, and organic sales continue to grow, but he and other analysts are watching consumers’ reaction to inflation strains. 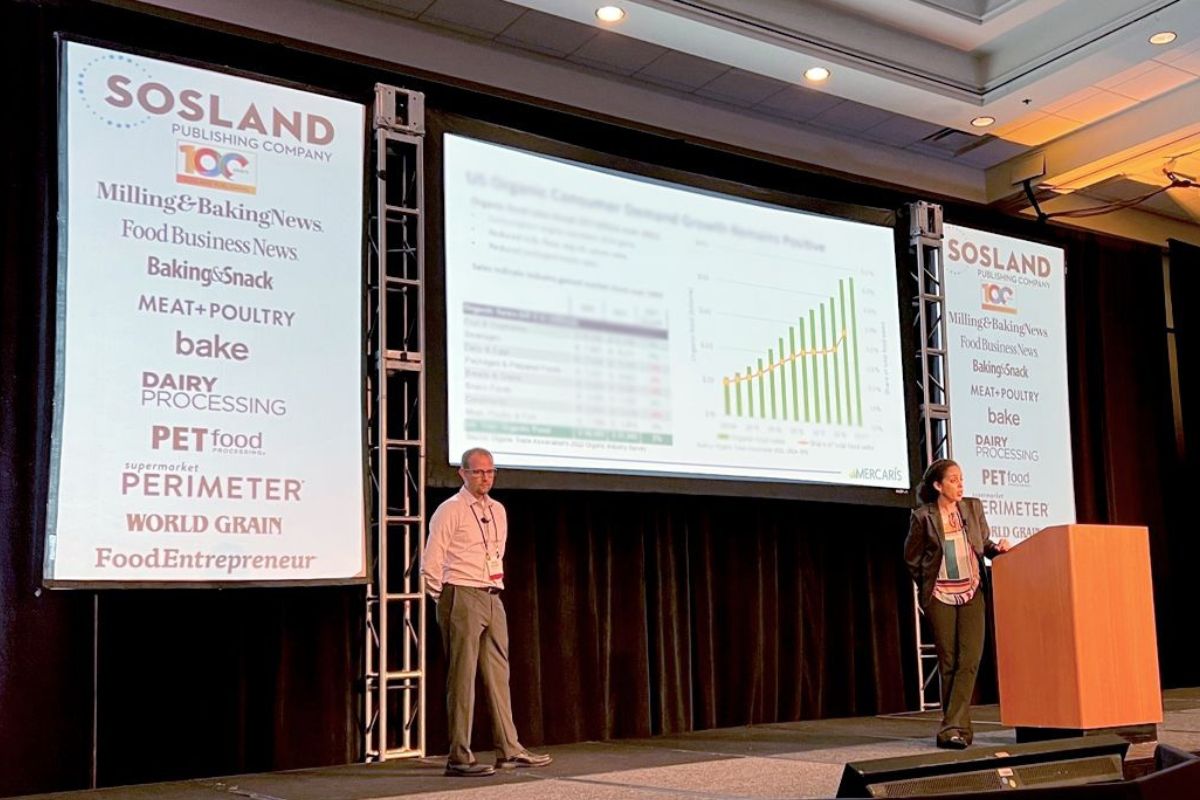 Organic prices are firm. A bushel of organic corn costs $11.24, the highest price since August 2015. And organic soybeans are now at an all-time high of $39.50 per bushel. Koory said tight soybean supplies and diminished imports from India, a primary exporter of organic soybean products, was supportive of the record-setting soybean prices. He acknowledged that finding appropriate exporters was difficult due to other countries’ pesticide standards and transparency concerns.

Also, the Russian invasion of Ukraine had an impact on organic soybean supplies. Ukraine was a major exporter of organic soybeans and grains, but certifications were no longer being processed due to the war, and previously certified fields that were now littered with war debris may be in jeopardy of losing their certification status, and recertification is at least a three-year process.

US organic corn, however, verged on entering a bearish position, Koory said. He pointed toward healthy production and expanded acres along with steady year-over-year carryover supplies as potential pressures to organic corn prices. He also said organic corn farmers were considering siphoning away some acres to plant soybeans to meet increasing demand, primarily from organic poultry farmers.

But US organic wheat production needed lots of improvement before prices decline, with values currently between $17 and $21 per bushel.