We use cookies to provide you with a better experience. By continuing to browse the site you are agreeing to our use of cookies in accordance with our Cookie Policy.
Home » Acres begin to add up for Kernza

Acres begin to add up for Kernza

SALINA, KANSAS, US — The future looks promising for a perennial grain that offers soil health benefits and may be used in foods and beverages. Kernza was grown on 3,957 acres in the United States and Canada in 2021, up from an estimated 500 acres in 2019, according to a report released in March by Salina-based The Land Institute, which promotes perennial, diverse, regenerative grain agriculture. Yield more than doubled to over 400 pounds (181.4 kilograms) per acre when compared with 2019 estimates, and new varieties have up to a potential 20% yield increase compared to current varieties.

The Kernza plant grows 10-foot-long roots that help sequester carbon from the air and foster healthy soil and water. Products containing Kernza include beer and pasta from Patagonia Provisions; cereal from Cascadian Farm, which is owned by General Mills, Inc.; a pancake mix from Perennial Pantry; and bread from Doughp Creations and Artisan Naan Bakery.

Over 1,000 acres of Kernza in 2021 were grown in both Minnesota and Kansas. Thirty-eight percent of the Kernza acres in the United States and Canada were certified organic through the US Department of Agriculture’s National Organic Program while 17% were transitioning to organic and 45% were non-organic.

“I’m fielding calls from growers across the country, almost daily, who want to know more about how Kernza can fit into their rotation,” said Carmen Fernholz, president of the Perennial Promise Growers Coop. “These are growers who want to protect their soil and water and want new economic opportunities for their farm and their communities.”

This year Kernza trademark licensees, partners and collaborators, supported by a US Department of Agriculture KernzaCAP grant, will begin to build a business association.

“After many years of working with The Land Institute developing GRAS (Generally Recognized As Safe) status for Kernza, seeking farmers to engage in growing a new crop, developing Kernza products and working collaboratively to develop infrastructure dedicated to this important work, we are thrilled to see the effects of this collective action reach consumers who are imperative in creating market pull for Kernza and perennial agriculture,” said Birgit Cameron, co-founder of Patagonia Provisions. 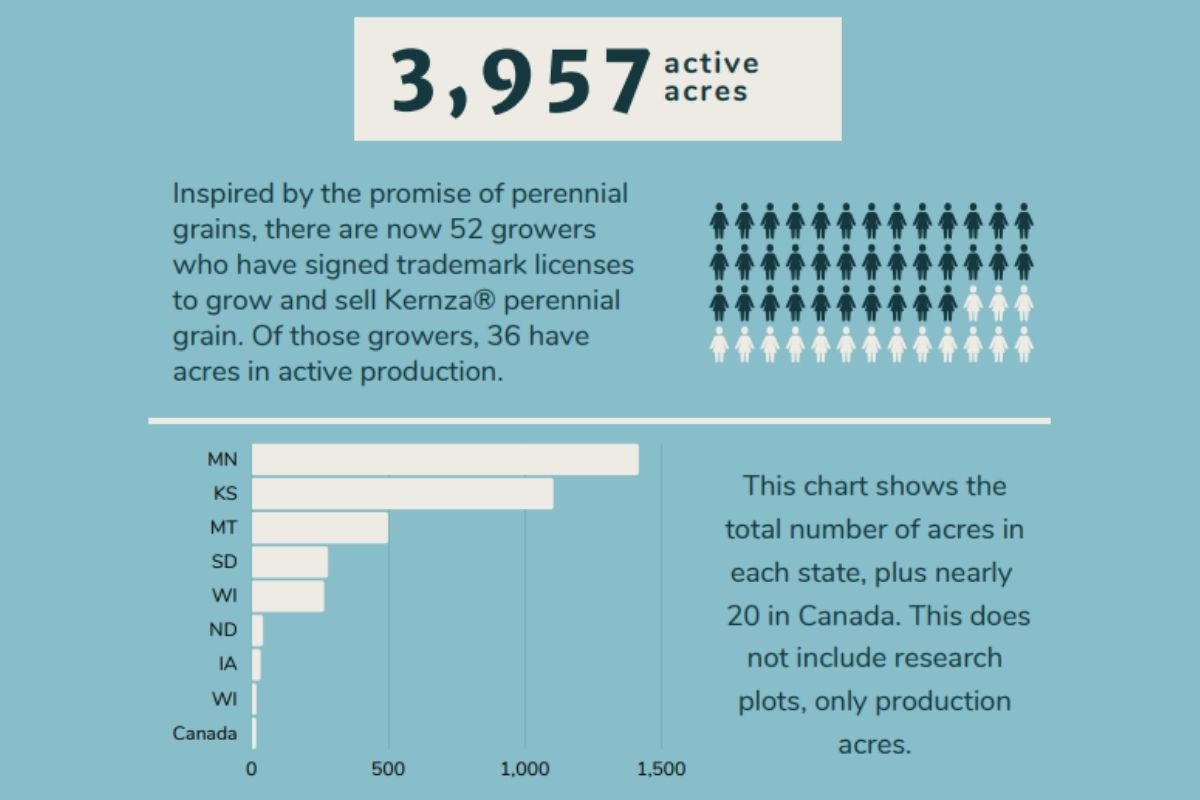 Chart courtesy of The Land Institute.
Commodities wheat education and research
Subscribe to Our Newsletters