We use cookies to provide you with a better experience. By continuing to browse the site you are agreeing to our use of cookies in accordance with our Cookie Policy.
Skip To Content
Home » Hard winter wheat goes ‘no bid’ for first time

KANSAS CITY, MISSOURI, US — The Russian invasion of Ukraine and ongoing conflict in the key Black Sea export region has sharply ramped up concerns about global supply, sending wheat futures prices soaring to 14-year highs and compelling the hard red winter basis Kansas City to post “no bid” for the first time in recent memory.

Kansas City wheat futures had been trading in a comparatively narrow range before Russia invaded Ukraine on Feb. 24 in the largest conventional attack on a sovereign state since the end of World War II in 1945. The Kansas City May future traded in a range from $8.04¾ and $8.46¾ a bushel between Jan. 2 and mid-February when it became apparent Russian president Vladimir Putin intended to launch a military action in Ukraine. KC May shot up 51¢ a bushel in the week ended Feb. 25, a day after Russian troops invaded and kicked off a full-scale war in Ukraine. At the same time, Chicago soft wheat futures soared to 14-year highs, topping futures prices seen in 2008, a marketing year that featured production disasters and extremely tight supplies.

As the conflict unfolded the following week, wheat markets continued to be roiled by uncertainty about how long fighting might last and how long Black Sea exports might be disrupted. Wheat futures exhibited extra volatility. The KC May future went limit up for the first four trading days of the week, meaning the contract could not be bought other than in a bull spread. KC May shot up 323½¢ a bushel in the week ended March 4.

On that day, spot market arrivals received no bids beyond a scant few so sharply lower as to be considered unreasonable. Spot supplies were pulled by sellers who planned to apply them against contracts where feasible and re-offer the rest at a later date. Offers then were still nominally on the table. But the basis committee in their daily tele-huddle opted to publish no bids or offers. 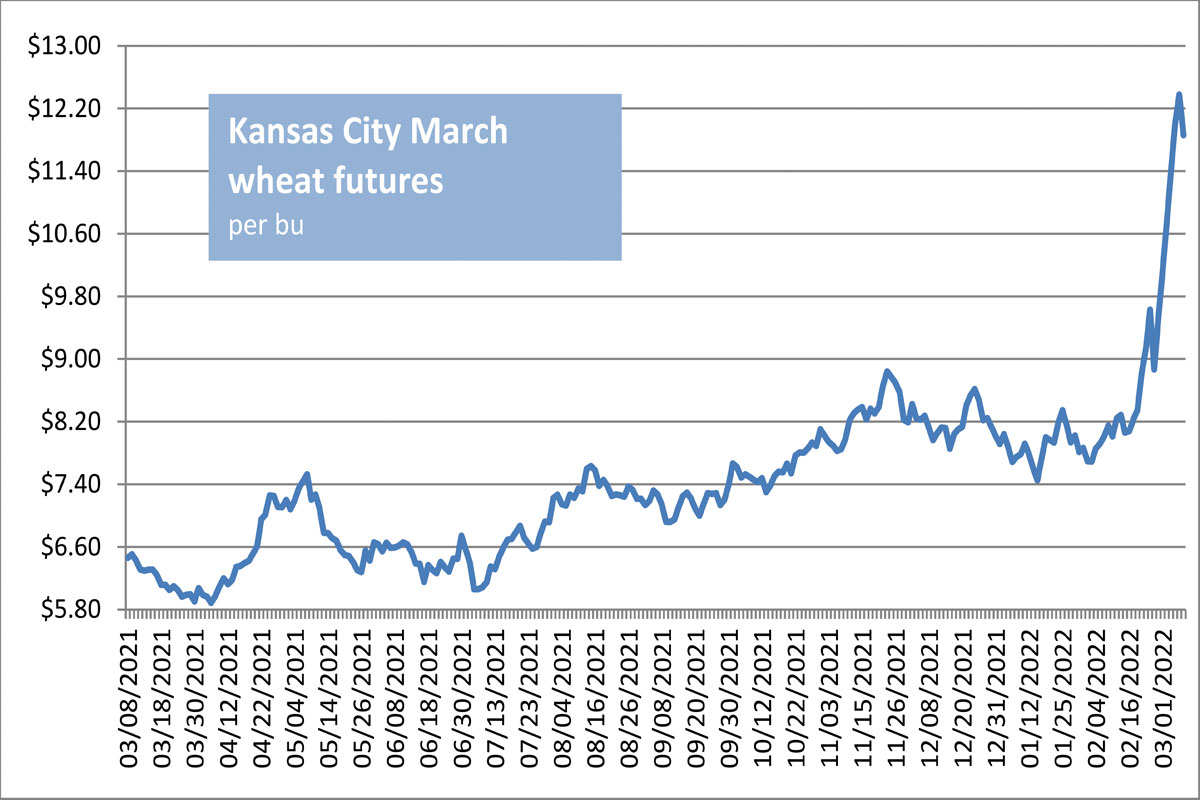 Many market observers already were considering the downside of extreme market moves that essentially became an enormous stress test of the US agricultural hedging system.

Justin Gilpin, chief executive officer of Kansas Wheat, in his March 4 weekly update said, “Twelve-dollar wheat futures do more damage than good for the wheat industry, especially farmers. We witnessed that in 2008, when futures markets decoupled from physical cash prices, much like we have seen this week.”

The basis was unchanged with no bids or offers posted the following Monday, March 7. By that time, most offers were considered unreasonable and pulled as well.  Some elevators told farmers they were pausing new-crop bidding, but still buying wheat at some locations. Others flipped their basis to the September, or even the December future. One major mill in the central Mississippi river valley said no wheat would be taken in until further notice.

Beginning March 1, hard red winter bids to the Texas Gulf for export were pulled. Ideas were that exporters, like the rest of the market, were trying to digest the possibility that Black Sea wheat exports, about 30% of the world market, could be turned off indefinitely by war. Soft red winter quotes at the Gulf had no bids, only offers, for a few trading days before posting about 45¢ a bushel higher on March 8 at 70¢ to 90¢ over Chicago May. Hard red winter wheat bids at the Gulf returned the same day with March prices on 12% protein at 110¢ over KC March, and April-May prices at 110¢ over KC July.

The to-arrive market was almost totally silent as the upended market had “everybody scratching their heads, farmers wanting to pull grain out of elevators,” a market veteran said, noting that in-out elevation costs at about 35¢ a bushel were “more money than they can make selling the grain.”

That was seen mostly as an emotional reaction and few producers followed through on pulling out supplies, traders said.

One noted the market needed “a few days to see if calmer heads prevail or if (Russian president Vladimir) Putin is really going to call a ceasefire.”

Though no ceasefire in Eastern Europe was reported, the No. 2 hard red winter basis Kansas City on March 8 featured quotes for the first time since March 3, taking the form of a flat 90¢ to 100¢ a bushel over KC May from 11.4% protein through 14% protein, more than $1 a bushel lower than a week earlier. But one trader explained that the posted prices reflected loadouts in Kansas City rather than supplies loaded in country and offered or sold through the KC gateway. The bottom three quotes still read “no bid.”