KANSAS CITY, MISSOURI, US — Michigan and Nebraska implemented the widest changes in fuel tax surcharges among the dozen or so states in which such changes took effect Jan. 1, the US Department of Agriculture said in its weekly Grain Transportation report.

The first adjustment in Michigan is estimated to raise fuel rates by about 1¢ per gallon.  Michigan’s fuel taxes are linked to inflation and the consumer price index, allowing tax collections to increase with inflation. Additional adjustments will occur each January.

Nebraska’s 27.7¢-per-gallon gas and diesel tax decreased on Jan. 1 by 2.9¢ to 24.8¢ per gallon. The adjustment is part of a Nebraska law linking the state’s fuel tax rates to the price of fuel, so that state will see another recalculation on July 1.

The grain carload commodity category was among six tracked by the AAR each month that saw carload losses compared with December 2020. Grain carloads in the month were down 12,701 carloads, or 9.9%.

“For most categories, rail traffic in 2021 was substantially higher than in 2020,” said John T. Gray, senior vice president of AAR. “On the carload side, chemicals set a new annual record and grain had its best year since 2008. Coal carloads were up substantially because of sharply higher natural gas prices, while carloads of motor vehicles suffered as microchip shortages forced automakers to cut output. For intermodal, a record-setting first half gave way to a lower second half as supply chain challenges persisted. Still, 2021 was the second-best US intermodal year ever, behind only 2018.”

The average January shuttle secondary railcar bid-offer per car were $1,844 above tariff in the week ended Dec. 30, 2021, an increase of $115 from the previous week and $1,359 more than the last week of 2020, according to the USDA’s Agricultural Marketing Service using data compiled by James B. Joiner Co. and Tradewest Brokerage Co. There were no non-shuttle bids/offers in the period.

Barged grain movements totaled 626,084 tons in the week ended Jan. 1, the US Army Corps of Engineers said, up 0.23% from the previous week but down 38% from the same period a year earlier.

The Port of Oakland, California, US, announced Jan. 3 it would open a 25-acre, paved off-dock container yard to store and reallocate empty containers collecting on the dock, the USDA said. The purpose is to increase terminal capacity and give the local agricultural export community easier access to containers. The move is part of the US government’s plan to address export-capacity shortages and support service restorations to the Ports of Oakland and Portland to give agricultural exporters more options on the West Coast and address some of the congestion at the Ports of Los Angeles and Long Beach, the USDA said.

The average US on-highway diesel fuel price in the week ended Jan. 3 was $3.613 per gallon, down 0.2¢ from the previous week but 97.3¢ above the same week a year earlier. At $3.477 per gallon, the average Midwest diesel price had declined for nine consecutive weeks by Jan. 3 and was at its lowest level since Oct. 4, 2021. 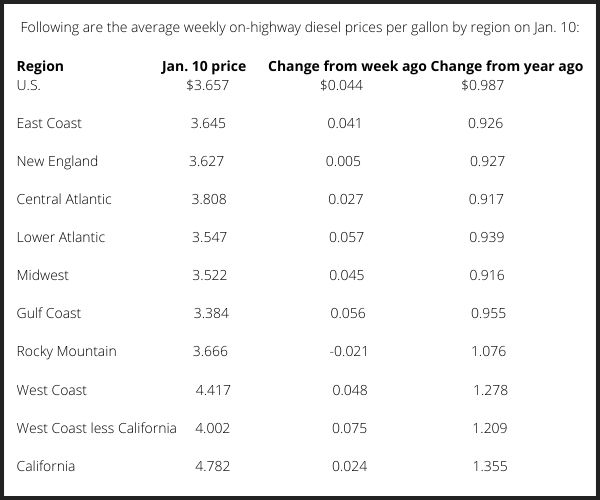