Weather problems and rumors of weather problems around the world recently have failed to hold much water and commodity markets are still in the doldrums because of it and a few other issues. Worry over U.S., Canada, Europe, the western Commonwealth of Independent States (CIS), China and Australia weather has failed to stimulate much market interest, possibly because there has not been much verification of the damaging weather predicted by various entities.

In recent weeks there have been rumors of returning drought in Europe and the western CIS. Some forecasters in late March noted below-average precipitation in Europe and decided the drought of 2018 was about to return. Certainly, in the following few weeks the weather pattern looked much like that of 2018 with a highly disjointed jet stream resulting in a blocking-type weather pattern. The most recent four weeks of precipitation in northern Europe does indeed look similar to last summer’s precipitation totals. However, it has been cool across the European continent. The cool weather has conserved soil moisture even though rainfall, as a percentage of normal, was well below average.

The combination of a solar-cycle minimum, El Niño and the lunar (18-year) cycle will make the reproduction of serious drought in 2019 across the European continent a very big challenge. Weather conditions are slated to trend wetter at times during the spring, although June could end up drier and warmer biased. Immediately after that, Europe and the western CIS may be facing a cooler and wetter scenario for the balance of summer. If the forecast is realized, production across the continent will not be nearly as poor as last year’s output, although it may not be ideal either.

Very dry autumn and winter conditions in the North China Plain, one of China’s more important grain, oilseed and cotton production areas, caught the eye of many meteorologists and climatologists in recent weeks. However, northern China does not usually receive much precipitation during the winter and an absence of precipitation can look much worse than it really is if autumn crops were favorably established before dryness set in. Most of the winter crops produced in the North China Plain are irrigated and were adequately established prior to dormancy in the autumn. A small part of the crop is rain-fed, and that crop was not as well established as it should have been. More importantly, spring and summer crops produced in the North China Plain are largely rain-fed and dryness during the spring after a long winter of dry weather can lead to some serious moisture shortages when planting, emergence and establishment are supposed to occur. The lack of moisture once again, like in Europe, bred some marketplace worry over China’s production year, but so far the North China Plain has had a few light rain events.

Northern China is expecting additional rainfall in late April and early May to help bolster topsoil moisture in support of winter wheat development and the planting of spring crops. Enough rain will fall to induce short-term improvements in winter crop production and to stimulate some good spring planting conditions in areas that were once considered too dry.

The game in northern China is not over. Prevailing El Niño conditions will leave some potential for dryness to return in the region later this spring and more likely during the summer. Even though the short-term prospects for China’s previously driest areas has improved, there could still be some dryness issues later in the year.

Australia is another continent that has suffered from drought and excessive heat for the past several months. Drought actually has been chronic for nearly two years, but the summer heat wave in 2018-19 will be remembered for a very long period of time. Now, the focus of attention is on wheat, barley and canola planting. Rain must start falling soon to support a favorable planting season.

Rain already has evolved recently in portions of southern Australia, but so far the precipitation has managed to miss key grain and oilseed production areas. Ocean and atmospheric conditions from the eastern Indian Ocean across Australia to the southwestern Pacific Ocean are expected to be supportive of rainfall this autumn. World Weather, Inc. believes that timely precipitation is bound to evolve to support planting in a more favorable manner than what some analysts fear. Queensland and northern New South Wales may hold onto some moisture deficits because of El Niño, but there should be sufficient moisture for good wheat, barley and canola planting. The establishment and production potential of those crops will then be determined by El Niño and the lunar cycle for the Southern Hemisphere spring. For now, that outlook is still promising. 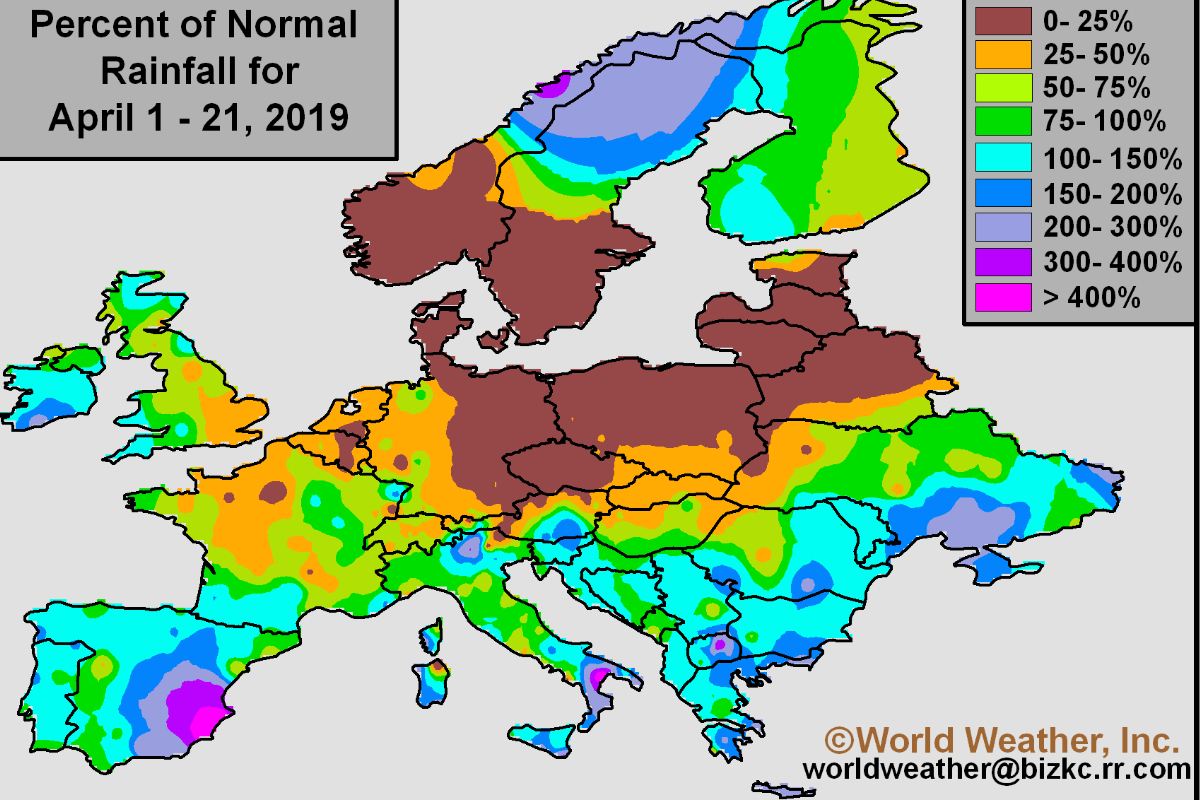 And that brings us to the United States. Flooding remains widespread on numerous rivers and streams in the western Midwest. Some farms are still either submerged or partially submerged in water. Worry over a much smaller U.S. corn and/or soybean crop will remain rampant for the next few weeks. Out of each area of the world discussed so far, the United States has the best chance of having to abandon some acreage in the upper Midwest and northeastern Great Plains because of too much spring moisture.

The wet weather pattern is expected to prevail, and as long as it does there will be worry of inadequate drying time for crops to be planted in before optimum planting dates pass. There’s still plenty of time for improvement. The lower Midwest, Delta and southeastern states will see improving weather during the first half of May. The southeastern states could experience drier-than-usual conditions from May into July, raising some potential for crop moisture stress. If the dryness becomes significant enough, there would be potential for the dryness to perpetuate deeper into the summer.

In the meantime, the upper Midwest may have the greatest challenge in breaking away from the wet weather pattern. If any region in the United States is going to have to be abandoned because of ongoing wet conditions, it will be in the eastern Dakotas, Minnesota, Wisconsin and possibly a part of northern Iowa. Only time will tell how significant the ongoing wet bias may be, but World Weather, Inc. anticipates more trying times ahead.

Dryness has become quite significant in the mainland areas of Southeast Asia, central parts of the Philippines, Central America and southern Mexico. Dryness in these areas has affected corn, sugarcane, citrus, rice and a few other crops, but problems need to be more widespread than this. El Niño is controlling the weather in these tropical and subtropical areas and some forecast models have been hinting that it may diminish in the second half of this year. If that happens, there will be one more region of the world with only rumors of production losses and very little actual damage.