We use cookies to provide you with a better experience. By continuing to browse the site you are agreeing to our use of cookies in accordance with our Cookie Policy.
Skip To Content
Home » Construction of G3 grain export terminal moves steadily along

MAIDSTONE, SASKATCHEWAN, CANADA — G3 continues to move ahead with construction of its grain export terminal in North Vancouver, British Columbia, Canada, with the completion of the docks. The company currently awaits the arrival of the big ship loaders that will direct the grain on board the ships when the terminal becomes fully operational in 2020.

The ship loaders are designed to reach all the hatches on any grain carrying ship to avoid vessels moving around during the loading process, and add to the speed and efficiency of the facility.

Installation of rail tracks is under way, with a section of 80 feet of rail being added every 15 minutes. When complete, the triple loop track system will be able to accommodate three, 150 modern hopper car trains and unload each in about 8 hours.

G3 said trains will return to the Prairies and take on another load of grain at its loop-track equipped elevators. This loop-to-loop system is expected to reduce the time trains spend traveling between Prairie and port by 40% to 50%, G3 said.

Many of the structural portions of the grain export terminal already have taken shape, including 48 grain silos, scale building and cleaning building, and the steelwork for supporting the miles of conveyors is criss-crossing the site. 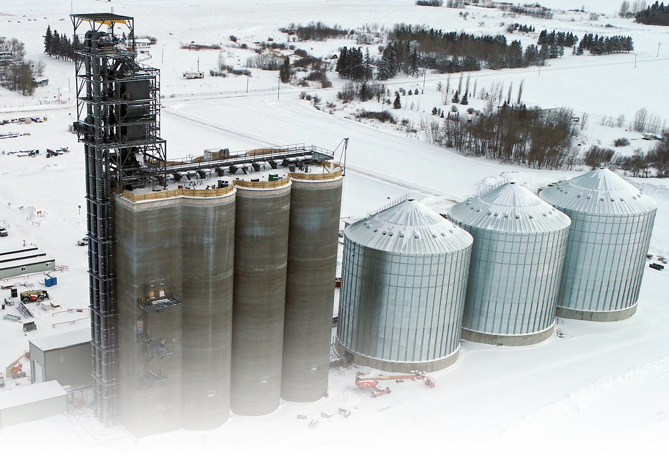 On top of nearing completion of the terminal G3 also debuted its new grain elevator in  Maidstone, Saskatchewan, Canada. The facility has a capacity of 42,000 tonnes. Construction of the high efficiency facility began in April 2018 and now is at an advanced stage, with concrete elevators and big steel bins already in place.

G3 Maidstone is contracting and due to start taking deliveries of grain from area farmers this summer. A Super-B truck cab be unloaded in less than five minutes.

The facility is one of six new G3 elevators planned for Western Canada. Construction has begun for the elevators in Morinville, Wetaskiwin and Carmangay, Alberta, Canada.

The company also plans to begin construction in the summer of 2019 of two new high-efficiency grain elevators in Alberta, Canada. The elevators will be located in Stettler County on the CP Railway and in Irricana on the CN Railway and are expected to operational in 2020.