We use cookies to provide you with a better experience. By continuing to browse the site you are agreeing to our use of cookies in accordance with our Cookie Policy.
Skip To Content
Home » US farmers earn more for goods in November

US farmers earn more for goods in November

WASHINGTON, DC, US — US farmers received 4.5% more for their goods in November than in October, the US Department of Agriculture said in its latest Agricultural Prices report. At the same time, the price of goods, services and other costs paid by farmers was unchanged.

The November prices received index was 133.4% of the 2011 base, up 4.5% from October and up 23% from November 2021, the USDA said. Farmers received higher prices for soybeans, eggs, cattle and lettuce but lower prices for milk, hogs and cotton.

Further, the volume of sales increased for corn, milk, cattle and cotton but decreased for wheat, soybeans, grapes and lettuce. The food commodities index was 145.3, up 8.6% from October and up 27% from November 2021. 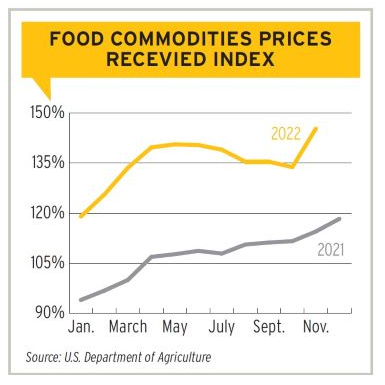 The prices paid index, which includes commodities and services, interest, taxes and wages, was 137.1% of the 2011 base in November, unchanged from October but up 11% from November 2021. Higher prices were paid for nitrogen, concentrates, feeder cattle and feeder pigs, while lower prices were paid for services, hay and forage, complete feeds and machinery.