The number and placement of sensors, and the interpretation of sensor readings, are key to effectively monitoring conditions in a stored grain mass and managing optimal windows of aeration based on real-time weather data.

The third article in this series focuses on the effectiveness of temperature cables for detecting increasing temperatures in the grain mass due to biological activity that results in self-heating and spoilage.

Moisture inside grain kernels equilibrates with the humidity in the air. Equilibrium relative humidity (ERH) is an essential parameter in grain storage management and must be kept below 65% to 70% to prevent mold growth. In general, molds are more active in warm conditions, 77° F to 95° F (25° C to 35° C), but some can be active in grain at or even below freezing temperature of 32° F (0° C).

If favorable conditions are present in stored grain, mold spores on grain kernel surfaces, or spores that have penetrated into broken or cracked kernels, will multiply. The biological activity of molds consumes dry matter in grain (starch), produces heat, releases CO2, and when allowed to continue will result in grain crusting. In severe cases, mold development can lead to mycotoxin contamination.

When heat is generated by biological mold activity, the heat is transferred mostly through conduction from kernel to kernel and to a lesser extent by natural convection through the grain mass. For self-heating grain to be detected, the heat must be transferred far enough that a temperature sensor on a temperature cable can detect the change in temperature. In practice, this requires grain managers to review the readings from their temperature cables weekly during warm weather periods and biweekly during cold weather periods and decide the potential cause of any unexplained temperature increases.

Grain temperatures may change slowly over time throughout the storage period but generally fall into predictable patterns. Grain warms or cools from the outside wall or headspace into the grain mass, and at a relatively consistent rate given grain is a pretty good insulator.

A common criterion used by grain managers is that if grain begins to change by more than 1° F per week over two to three weeks in a row, action to maintain grain quality may need to be taken. To simplify this task, temperature cable readings typically are organized by sensor and time stamp.

Having all readings from one sensor node lined up by date makes trends over time easier to interpret (see example shown in Table 1, upper left). However, a grain manager can only act as quickly as the temperature cables can detect self-heating.

A computer model developed by the authors at Iowa State University was utilized to predict the heat transfer of self-heating grain in a bin. For this example, we evaluated corn stored in a bin into winter in a US Midwest location. Initial corn temperature was uniform at 39.2° F (4° C) after assuming successful aeration cooling. A hot spot was allowed to develop that increased in temperature by 5.4° F (3° C) per week starting Jan. 1.

To the left is a temperature cable readout generated from the model. While the claims made by temperature cable manufacturers vary, sensors generally are spaced out 6 to 8 feet (1.8 to 2.4 m) so we examined the response time of a sensor 3 ft (0.9 m) from the self-heating grain.

In Table 1, sensor 2 is 3 feet (0.9 m) from the self-heating grain. At this distance, it takes two weeks before a change is detected. However, this change is only 0.2° F (0.1° C). Most grain temperature monitoring systems do not record temperature to the tenth of a degree and thus grain managers would not notice a full degree temperature change until after four weeks.

It would take at least five weeks before the grain manager may notice that temperature has increased for two consecutive weeks by a total of 2° F. Only then they may consider acting to mitigate self-heating grain. During this five-week period, the grain in the center of the hot spot would have increased by 20° F to 25° F (11° C to14° C). Even with careful documentation and weekly examination, a grain manager cannot know how close cable sensors are to the hot spot. Most importantly, this implies that one cannot assume that a 1° F increase in a temperature cable sensor reading is indicative of a hot spot 1° F warmer than the surrounding grain. In this example, recall that the hot spot was 3 feet (0.9 m) from the sensor, yet it took about five weeks to detect it.

Figure 1 depicts the temperature change over time for sensors on one cable at different distances from the self-heating grain source. The distance from the sensor is a critical factor in how quickly the hot spot can be detected as a function of heat conduction throughout the stored grain mass. 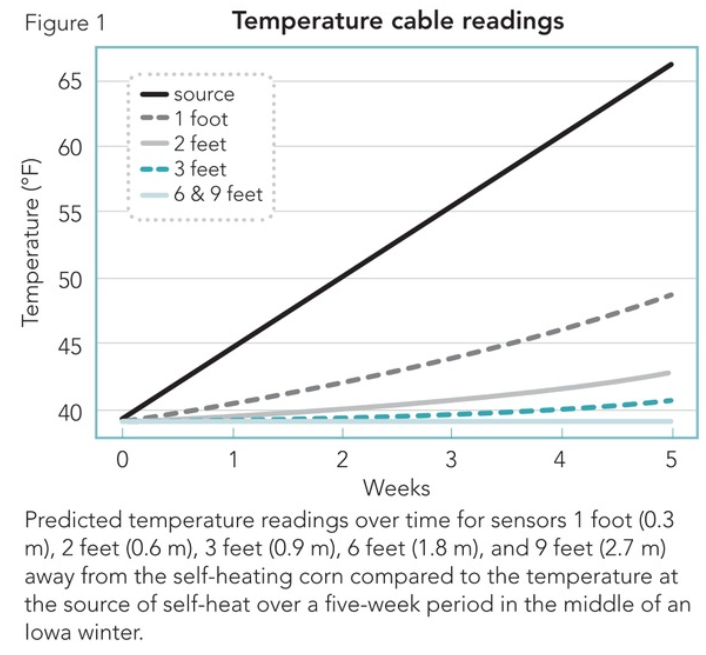 The figure shows that at 6 feet (1.8 m) and 9 feet (2.7 m), there is no change in temperature evidence of detecting spoilage even after five weeks. Temperature monitoring systems that claim to have a sensing radius in this range would therefore give a false sense of security to stored grain managers. Even at just 1 foot (0.3 m) of distance from the heat source, there is considerable difference between the hot spot temperature (solid black source line) and the temperature reading by the sensor (orange 1 foot line).

Table 2 (left) shows the predicted temperature cable readings for sensors located at the various distances from the self-heating corn. Temperatures are rounded to what monitoring systems would typically indicate and would form the basis for a grain manager to make stored grain management decisions such as turning on aeration fans to cool self-heating grain.

It is important to remember that when looking at the data presented in Table 2, all sensors are sensing the heat from the same hot spot. The only difference is the distance from the hot spot to each sensor. Recall from previous installments of this series of articles that much of the grain mass is not within 3 feet (0.9 m) for most recommended temperature cable configurations. Thus, the ability to detect self-heating grain depends, at least partially, on chance. 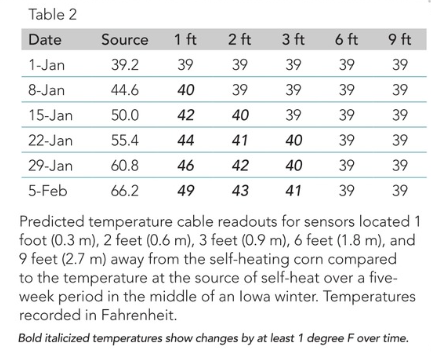 In the time it takes for a hot spot to be detected, the self-heating grain continues to increase in temperature to 66° F (19 C) in this example. If not detected and not mitigated (such as with aeration cooling), it will continue to increase in temperature and volume and cause heat damage to the stored grain. In the worst-case scenario, it could also result in a grain bin fire.

Self-heating grain most commonly is caused by biological activity due to molds. Preventing high ERH in a stored grain mass is the best way to prevent mold development. If mold does develop, the heat moves slowly through the grain mass.

It is important to track warming and cooling of stored grain by checking temperature cables weekly during warm weather and every other week during cold weather periods. Changes in temperature should be compared to previous weeks.

Unexplained increases in temperature may indicate spoilage. However, reading temperature cables provides limited protection because of the small volumetric sensing range of temperature cables. If the source of self-heating is as little as 3 feet (0.9 m) away from a sensor, it may take four to five weeks to detect a 1° F to 2° F change.

If grain managers do not appreciate how slowly heat moves through a grain mass, they may have a false sense of security. In the final installment of this series of articles, we will cover CO2 monitoring and its effectiveness in early detection of biological activity.

Dirk E. Maier is a post-harvest engineer with the Iowa Grain Quality Initiative at Iowa State University. He may be reached at dmaier@iastate.edu.