Celebrating a century of success

GRAND FORKS, NORTH DAKOTA, US — The story of the North Dakota State Mill and Elevator Association began a century ago when the state’s wheat farmers sought an alternative buyer to combat what they felt were unfair business practices on the part of the railroads and flour mills in Minneapolis, Minnesota, US.

In the early 1900s, the flour mills and grain exchange in Minneapolis were the primary wheat markets for North Dakota farmers and grain elevators. After freight costs were deducted, the wheat producers had very little profit to show for their spring wheat and durum harvests. In 1919, the state of North Dakota offered a solution: It would build a state-owned mill in Grand Forks that would eliminate the freight costs and offer fairer prices to the wheat producers. The North Dakota Mill and Elevator Association opened for business on Oct. 30, 1922. Today, it is by far the largest flour mill in the United States in terms of daily milling capacity and one of the nation’s most successful milling operations.

“North Dakota spring wheat and durum is some of the best wheat in the world and allows us to have the highest quality flour out there." - Vance Taylor, president and CEO of North Dakota Mill

Vance Taylor, president and chief executive officer of North Dakota Mill since 2000, said the unyielding support of the state government over the decades and being located near some of the most fertile farmland in the world has proven to be a winning combination.

“Our location in North Dakota is key,” Taylor said in a recent interview with World Grain. “North Dakota spring wheat and durum is some of the best wheat in the world and allows us to have the highest quality flour out there. And we try to deliver that with the highest level of customer service. We also have great employees. North Dakotans have a great work ethic and they have been a big part of our success story since the beginning.”

North Dakota Mill is unique in several respects. It is a state-owned business in a country that has thrived on the idea of private ownership and capitalism since it won independence from Britain in 1776. It is the only state-owned flour mill in the United States.

While many of its privately owned and publicly traded competitors in the United States have scattered their flour production among a number of different milling locations, North Dakota Mill produces all of its flour and byproducts at one milling complex that is located on 100 acres on the north side of Grand Forks.

The facility is mammoth, featuring 10 milling units with total daily milling capacity of 60,500 cwts, having added a 6,000-cwt durum unit and a 4,000-cwt spring wheat unit this year. Its total daily production capacity at the Grand Forks location is nearly double the size of the country’s next largest mill, Ardent Mills’ plant in Hastings, Minnesota, US, which has capacity to produce 35,260 cwts of flour per day.

Since Taylor became president and CEO in 2000, milling capacity at the site has almost doubled.

“Growth has been key to our success in almost every market segment,” said Taylor, who spent the first part of his career with Conagra Milling. “Since 2000, we’ve added spring wheat, durum and whole wheat milling capacity mainly driven by increasing demand from existing customers. We have been able to fill new capacity fairly quickly as it has been built.”

After commissioning the “H” and “I” milling units earlier this year, North Dakota Mill began another expansion project to increase feed storage capacity that will be completed in the coming months.

While most new milling capacity in the United States in the 21st century has been added closer to customer bases near large population centers, North Dakota Mill has bucked that trend by expanding at its sole location near its wheat growers, far away from most of its customers.

“We deliver flour coast to coast, but mostly east of the Rocky Mountains,” Taylor said. “One of our main areas is in and around New York City. We do a lot of business in the northeastern US and the Ohio River Valley.”

Although being located a long distance from many of its customers could be viewed as a disadvantage, Taylor said there is a hidden advantage to the lengthier deliveries.

“Our North Dakota location is an advantage because we ship long distances, adding a few days of age to our flour, and we feel that the additional oxidation improves baking characteristics,” Taylor said. 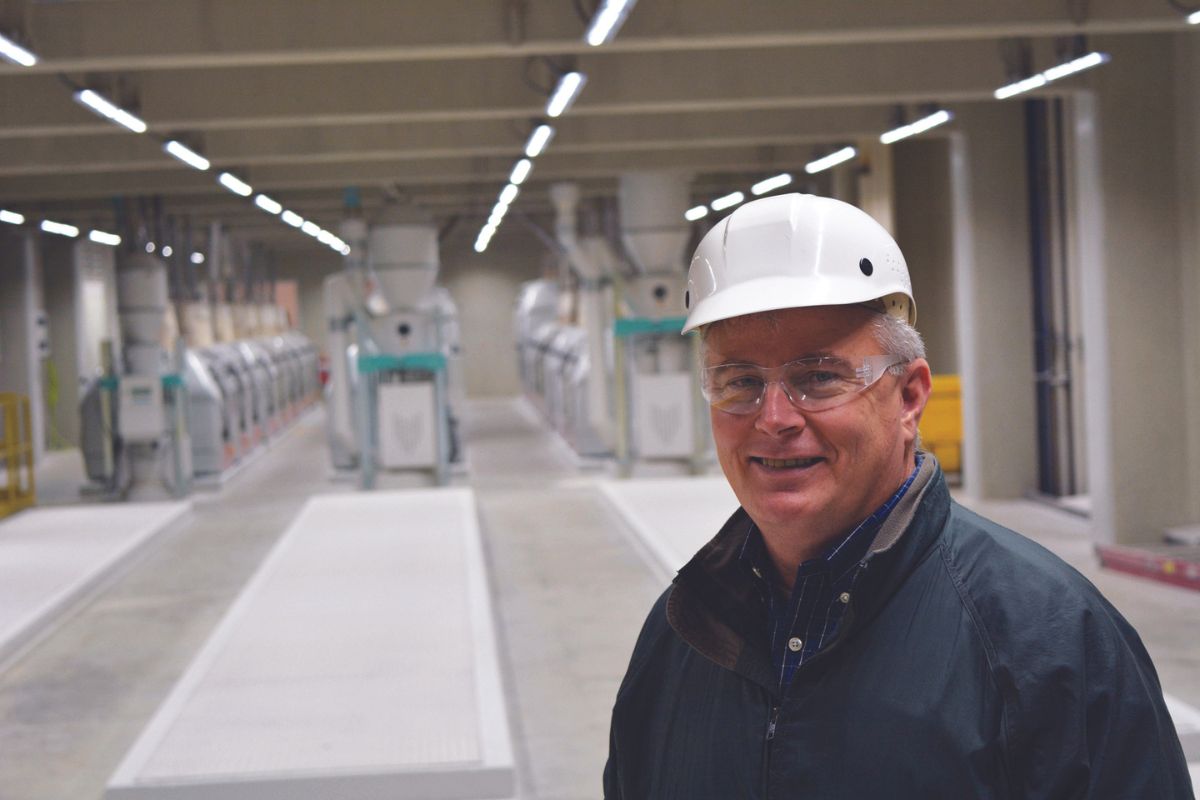 The business model appears to be working as most of the growth in demand for North Dakota Mill’s products in recent years has been from existing customers, Taylor said.

“The highest quality flour delivered at the highest level of customer service … that’s our mission,” he said.

While the bulk flour business accounts for the largest part of North Dakota Mill sales, about 30% is packaged, mostly in 50-pound bags. The company also has increased sales with family flour and a line of bread mixes and pancake mixes under its retail brand: North Dakota Maid.

“They’re all important to us,” Taylor said. “We have our retail line, bulk truck, large pack, direct bulk cars, rail truck transfer, and ship bagged by truck and rail.”

North Dakota Mill is surrounded by some of highest quality spring and durum wheat in the world. Although it does receive some wheat from outside of North Dakota by rail, most of it is grown within a 100-mile radius of the plant.

“Most of it comes in by truck,” he said. “Our five-days-a-week average is around 200 trucks of wheat per day.”

Unlike privately or publicly owned milling companies, which answer to an elected board of directors, North Dakota Mill is governed by the state of North Dakota. More specifically, it is overseen by a commission comprised of three elected officials: the governor, agricultural commissioner and attorney general. Taylor provides quarterly updates in open meetings to the commission.

Taylor said most of the day-to-day business is left to the mill management, although larger projects must be approved by the commission.

Although it is government-owned, North Dakota Mill is very much a for-profit organization. Taylor noted that the state requires about 50% of North Dakota Mill’s profits to go to the state’s general fund and the other half is used to reinvest in the mill, including in the form of capital projects.

He emphasized that North Dakota Mill receives no financial assistance from the state.

North Dakota Mill has maintained a healthy balance sheet. In 2021, it posted a profit of $13.46 million, an increase of $2 million from the previous year and the fourth highest on record. Its 2022 earnings report will be released in December.

The most recent earnings report found that between spending on local grain, other North Dakota-based suppliers and payroll for its 156 employees, North Dakota Mill provides a direct economic impact to the region of more than $250 million. A North Dakota State University study found that for every dollar in direct economic activity from wheat processing, another $2.32 was generated in secondary economic activity, resulting in a total economic impact of more than $832 million.

A common ingredient in any company’s success is a dedicated workforce, and North Dakota Mill is no different.

“We have a lot of long-term employees and not a lot of turnover,” Taylor said. “We do have a grain millers union here, which includes about 102 of our 156 employees. Everyone — union and salaried — are all under the same bonus program, which I think helps us work together to achieve common goals.”

The North Dakota Mill employees’ competence and cohesiveness was put to the test during the early days of the COVID-19 pandemic. The company, which was formed in the midst of the Spanish Flu pandemic from 1919-1922, was able to successfully navigate the challenges of COVID-19 thanks to its dedicated staff.

“We staggered breaks, took temperatures of employees and locked down our facilities even more tightly than we were before,” Taylor said. “The employees made a great effort to keep the mill operating through the pandemic. We had the same issues that everyone did, but I think it’s kind of nice to say that because of the great effort of our employees we were able to get our products to our customers on time throughout the pandemic.”

Like any company, North Dakota Mill has seen its ups and downs over the years. Perhaps the most trying time in the mill’s history came in the late 1960s when legislation was introduced to abolish the state mill. That bill ultimately was defeated in 1967, but two years later the mill faced an even greater crisis when a fire burned the entire complex to the ground, shutting it down for nearly 18 months. Taylor said the decision was made to rebuild and the state kept all North Dakota Mill employees on the payroll.

“The employees helped with the rebuild of the mill,” Taylor said.

To commemorate its century in business, North Dakota Mill invited customers, suppliers, state officials, local officials and other dignitaries to a celebration at its Grand Forks facility on Oct. 20.

“Since the North Dakota Mill opened its doors at the Grand Forks facility in 1922, it has been fulfilling its mission to promote agriculture, commerce and industry,” the Industrial Commission members said in a joint statement. “What began with an initial capacity of 588,000 pounds of flour per day has grown by more than tenfold to over 6 million pounds per day, making it the largest standalone flour mill in the nation and the eighth-largest milling company in the United States.

“The state mill adds value to 40 million bushels of spring wheat and durum per year, providing a reliable market and enhancing profitability for our state’s farmers. Since the year 2000, the mill has transferred over $100 million in profits to the state’s general fund or Ag Products Utilization Fund, supporting services to North Dakota citizens and projects that keep our agricultural industry on the cutting edge.

“We are deeply grateful for the North Dakota Mill team that works hard every day to provide a superior product and great customer service.”

Taylor said he believes the best chapters in the North Dakota Mill’s success story are yet to come.

“We take a lot of pride in our story,” Taylor said. “We are definitely excited about celebrating our 100-year anniversary and also excited about the future and what’s in store for the state mill in the next 100 years.”