KANSAS CITY, MISSOURI, US — With the pandemic a not-too-distant memory, ship loading and unloading equipment suppliers are now facing commodity price volatility, increasing prices for steel and electrical components and the ongoing war in Ukraine.

“Our philosophy is to provide a dedicated solution rather than a standardized and less flexible machine,” one supplier said.

Prior to Russia’s invasion of Ukraine in February, that region was one of the most active, said one supplier. When the war started, the supplier suffered a 33% loss in orders.

“This is not easy to compensate, but with our high order backlog and new orders received, we will have a strong business year,” the supplier said, adding that they hope Ukrainian projects will restart next year. 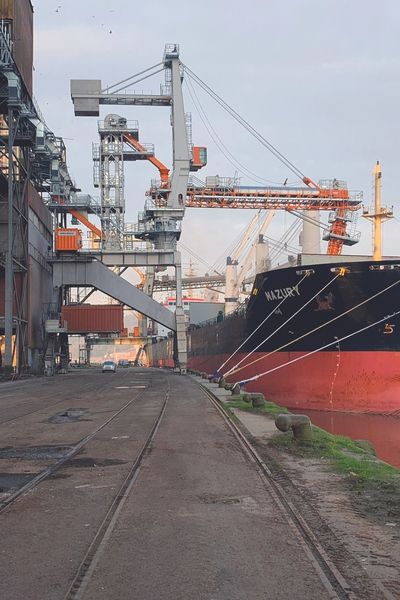 Senalia has worked with Neuero on three other ship loading projects in Rouen, France. Photo courtesy of Neuero. showed the importance of thinking strategically and not solely focusing on how to make the lowest cost, a supplier said.

“We decided a long time ago not to have our own manufacturing in China, because they have not been fair in business,” the supplier said. “The problem is that we are being affected indirectly, because many companies depend on China supply.”

Along with postponing projects in the Black Sea region, a major challenge is the support of existing equipment, regardless of the political situation.

“Remote support has been crucial in this period,” one supplier said.

Business remains strong in Europe, the Middle East, and Far East as well as North and South America, suppliers said.

When looking to upgrade an existing ship loader, Senalia opted to work with Melle, Germany-based Neuero, who it had done business with in the past. Neuero had supplied four previous ship loaders to the same location in Rouen, France.

After intensive research and visits to several ports, Senalia decided in favor of the Neuero KIKO DLH technology. The facility has a loading and unloading capacity of 1,200 tph and handles wheat, corn and barley.

“It is always motivating to get new projects from the same client and be part of a new era proving it is possible to reduce the dust in the atmosphere and at the same time provide efficient and safe ship loading projects,” Neuero said.

Cargill recently refurbished an existing terminal in Westwego, Louisiana, US, to increase capacity and reduce dust emissions. As part of the project, Bedeschi, based in Padova, Italy, supplied the ship loading system for the terminal located on the Mississippi River.

Bedeschi engineered, manufactured, installed and commissioned a shuttle type ship-loading arm capable of loading grains and oilseeds at 80,000 bph on vessels up to 120,000 dwt. It also provided the mechanical and electrical works. 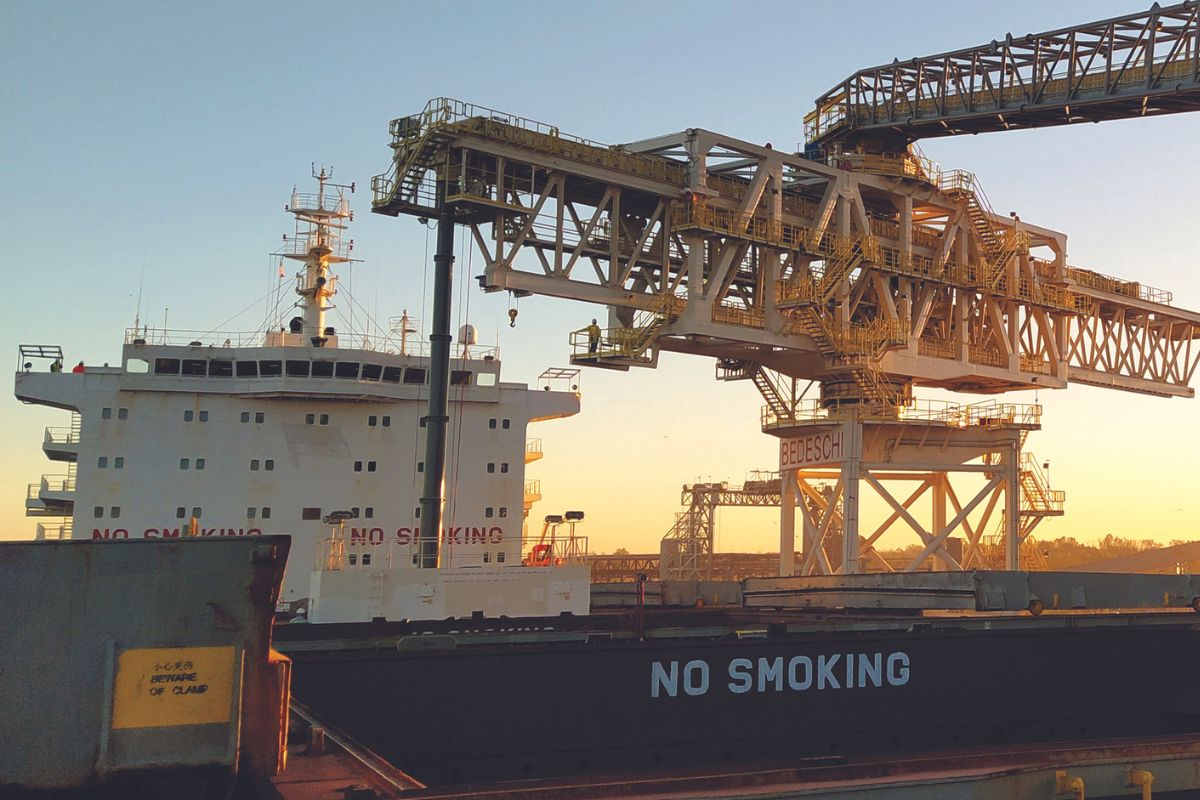 “We prioritize sustainability in order to reduce the impacts of waste on the environment and develop efficient solutions for reducing emissions, spillages and any kind of pollution,” Bedeschi said. The company monitored all phases of the project in order to optimize costs and time and maintain good productivity.

The equipment was preassembled in Italy and shipped to the New Orleans area in three main parts.

“This is a clear example of an eco-friendly solution made for reducing to the minimum the downtime in port handling operations and maximizing the customer’s benefits,” Bedeschi said.

The Dagon grain terminal, managed by Dagon Israel Granaries Co., is the biggest terminal of its kind in Israel and serves the country’s growing grain imports. When its existing unloader had reached the end of its service life and needed replacing, the company turned to Siwertell screw-type unloader technology to fill the gap.

Israel imports around 5 million tonnes of grain annually, and around 70% of that passes through Haifa, one of its oldest ports. Dagon handles wheat, milling wheat and seed wheat, maize, corn, barley, rapeseed, sorghum and soybeans.

Replacing an existing unloading system presents a challenge because any new unloader must fit in perfectly with the surrounding infrastructure and downward conveying arrangements. In addition, installation usually happens while operations are ongoing.

Along with these challenges, the operator at Dagon was working on a tight budget. It was also the first time Siwertell had installed a high-capacity unloader in Israel. This meant understanding and complying with local laws and regulations, including meeting a 20% local content commitment.

Siwertell worked closely with the Israel Ports Development and Assets Co. to develop a solution that worked well for the Dagon grain terminal, and after about 18 months of teamwork, it delivered a Siwertell 640M-type, rail-mounted, ship unloader to serve the grain terminal, located in the port of Haifa.

The Siwertell unloader has met the needs of Israel’s largest grain terminal, delivering a grain handling capacity of 1,200 tph and discharging vessels up to 73,000 dwt.

Grain arriving into the port is now discharged via the high-capacity Siwertell unloader and the two existing pneumatic unloaders. The terminal has the capacity to store grain and convey it for onward transportation by railcars and trucks, with the silos operating on a 24-hour-a-day basis, except for religious days.

The grain terminal is critical to the country’s agri-bulk imports and in the past five years, the terminal has gone from unloading 125 to 169 vessels per year. Vessels are discharged and their shipments are transferred via a series of conveyor belts protected by a concrete bridge, to silo storage. Dagon has a storage capacity of around 85,000 tonnes, and about 22,000 tonnes of stored grain can be moved from the silo to railcars or trucks each day. At its peak import volume, the silos undergo about 40 cycles a year.

“The unit was commissioned in 2018, comfortably replacing the capacity of the terminal’s old equipment and greatly reducing the number of days that vessels were required to be in port,” said Bertil Andersson, sales manager, Bruks Siwertell.

Four years on and the terminal is going from strength to strength; meeting the owners’ expectations and comfortably able to handle the grain import volumes that arrive at the terminal.

The Ministry of Food (DG Food) in Bangladesh recently completed the installation of a fourth ship unloader supplied by VIGAN, based in Nivelles, Belgium. The unloader, installed at Chattogram, was delayed due to the COVID-19 pandemic. 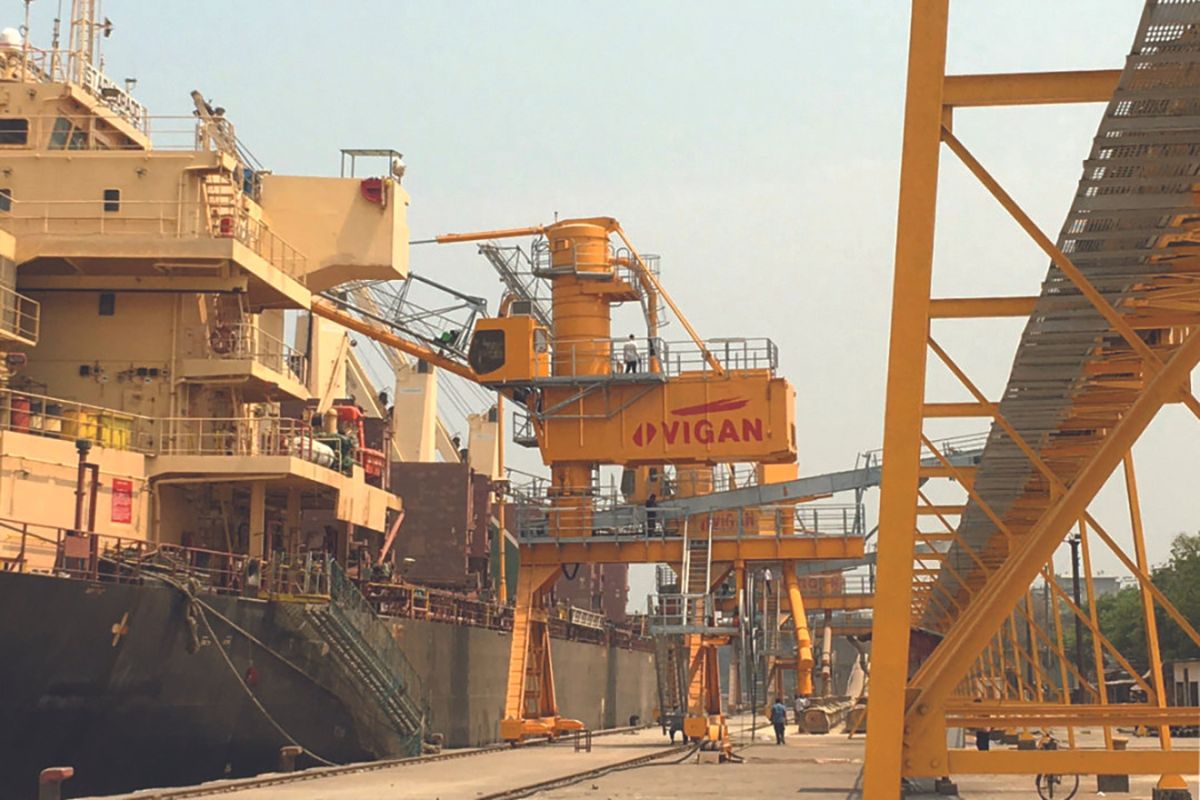 DG Food purchased its first pneumatic unloader from VIGAN in 2008 for Chittagong Grain Silos. A second was commissioned later that year and a third in 2018.

DG Food also purchased two VIGAN unloaders and one loader for its grain silos in Mongla in 2013.

For the inner country, DG Food purchased a VIGAN barge loader in Ashunganj in 2019 and two barge unloaders for their grain silos in Narayanganj.

“We are both happy and proud that a vast country like Bangladesh keeps its trust in VIGAN technology and gladly do what is needed to have our 11 machines operate 24/7,” VIGAN said.