The arrival of the new crop in some major exporters as well as the rise in the US dollar against most currencies internationally has triggered an easing in prices in many sectors of the rice market.

The International Grains Council (IGC) in its Oct. 20 Grain Market Report described rice prices as over the preceding month as “slightly weaker amid currency movements and the impending arrival of new crop supplies in several exporters.”

“In Thailand, 5% broken offers were modestly softer m/m, at US$411 fob Bangkok, on slow demand and as a weaker local currency weighed, while quotations in Pakistan retreated by US$11, to US$394 (fob Karachi), as new crop harvesting got underway,” the IGC said. “Indian values also fell in subdued activity ahead of kharif arrivals, but tighter supplies underpinned gains in Vietnam.” 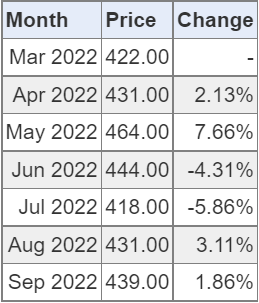 A weekly report, dated Oct. 21, from the USDA in Bangkok on the rice market in Thailand noted that “export prices decreased 2% to 8% as new-crop rice supplies began entering the market.” A monthly USDA report from Burma, dated Oct. 19, reported prices down “as supplies from the new rice crop enter the market and the Myanmar kyat appreciated against the US dollar.”

The US Rice Producers in their Oct. 21 Rice Advocate publication said that harvesting was almost complete, “Paddy prices remain firm, but the spot market is not as active as most producers expected it to be post-harvest.”

They complain that “the largest milled market for US rice is getting worse with each passing day, as it’s nearly impossible to unload a vessel in Haiti right now, even for NGOs trying to help the people in crisis.”

Looking at paddy exports, they complained of the US losing market share in Mexico to Brazil and reported that milling was winding down after the fulfilment of 80,000 tonnes of Iraq business.

“The domestic market has been the steady savior, but with both Haiti and Iraq in the wings and prices that are significantly higher than the competition, it will be an interesting year marketing this crop,” US Rice Producers commented.

The United Nations Food and Agriculture Organization (FAO), in its Rice Price Index, which was published on Oct. 7, said that prices overall rose by 2.2% in September to reach an 18-month high.

“Indica prices spearheaded this increase, rising 3.4% above August levels and reversing all losses registered since June,” it said. “Nevertheless, Japonica prices also moved up by 4.4% to hit an all-time nominal high, as a revival in shipments lifted values in Vietnam, adding to firmness in drought-struck California.”

“Aromatica quotations also declined by 2.5%, mostly reflecting bearishness in Pakistan ahead of the 2022 basmati harvest, which was largely spared by the severe floods affecting the country,” FAO said.

“Asian Indica markets were dominated by supply-side developments last month,” FAO reported, noting in particular the imposition by India on Sept. 9 of “an export ban on fully broken rice, alongside a 20% export duty on non-parboiled paddy, husked and semi/wholly milled Indica.”

While the export ban on Indian brokens received mixed responses in competing origins, buoying values in Myanmar and Pakistan, while those of Thailand continued to ease, Indian quotations of 5% and 25% white rice reacted to the export tax by rising 10 percent month-on-month, FAO said.

Another point made by the Rome, Italy-based organization was that “across-the-board currency depreciations against the US dollar in the major origins, limited price gains, especially in Thailand and Vietnam.”

Chris Lyddon is World Grain's European correspondent. He may be contacted at: cajlyddon@gmail.com.