CRAWFORDVILLE, GEORGIA, US — When building and designing its new feed mill, Harrison Poultry turned to NORD DRIVESYSTEMS for reliable mechatronic drive solutions for its conveyor systems, elevators, mixers and screws.

The $52 million facility in Crawfordville, Georgia, US, is ultra-modern with enough capacity to support the company’s grain and feed processing needs for the next 20 years and beyond.

NORD distributor partner Campbell Sales in Athens, Georgia, US, has been a strategic integrator and suppliers to various Harrison facilities for many years.

“Will Campbell talked me into installing a NORD gearbox at our old feed mill in Winder, Georgia,” said David Sailors, operations manager for Harrison. “That was 20 years ago, and those units are still running. We’ve bought several others since then with the same results.”

Hogenson Construction was selected as the general contractor for the massive project. 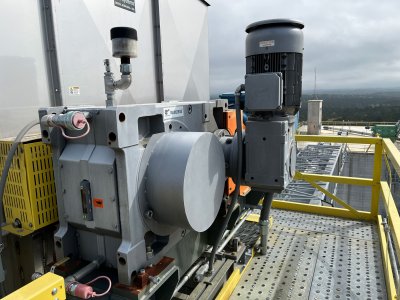 The Harrison, Hogenson and Campbell teams worked together to specify, size, and select NORD gear reducers and Nord MAXXRIVE industrial gear units. Nord application engineers then worked directly with the various US manufacturers who would eventually provide the mill systems and equipment, in order to provide guidance on design, assembly and commissioning.

The NORD solutions eliminated the need for outdated shives/pulleys/belts/guards, etc. They also use a direct-drive concept that is much safer and more efficient. It was also more cost effective for Harrison due to reduced maintenance and service requirements commonly attributed to belts and pulleys. Fewer moving parts also enhanced the overall reliability and reduced the number of wear parts that needed to be stocked.

For this project all NORD gear units from 3 HP to 200 HP were equipped with NEMA input adapters for ease of motor replacement. Over 75 different NORD selections were used on the Harrison feed mill project ranging from 4,000 pounds per inch to 500,000 pounds per inch torque. NORD’s extensive product offering was also a key factor in the decision-making process and allowed Harrison to consolidate all requirements to one key vendor partner.

“We have enough space to store around a million bushels of grain now,” Sailors said. “There are two pellet lines in place with a total production capacity of 14,000 tons of feed per week, but we can increase that to 21,000 tons by adding a third line. There are also plans to install a pair of silos for soybean meal, giving us an additional 5,000 tons of storage capacity at some point. Aside from all that, we had to construct the loop track coming off the main rail line, which is about a mile and a half long and has two auxiliary tracks that can each hold 15 C114 railcars. It’s a very impressive facility.” 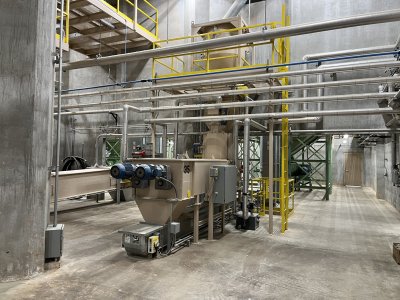 Strange added, “We have two grinders cranking out 170 tons of corn each hour, and our mixer capacity is 240 tons per hour. There are approximately 6,000 (combined) horsepower worth of motors here at the mill and 95% of them have a NORD gearbox attached. They’re a lot more energy-efficient, something that’s increasingly important these days. We’re very happy with our decision.”