KANSAS CITY, MISSOURI, US — Traders of hard red winter wheat said rail performance has improved in recent weeks and were hopeful more equipment would soon be placed for sale in online auctions.

Railroad performance was sub-par during the fourth quarter. Union Pacific railroad told the Wall Street Journal it had miscalculated the effects on crews from COVID-19 infections and exposures amid a general US labor shortage.

“I look at that and I think, ‘Shame on us,’” Lance Fritz, chief executive officer of Union Pacific, said during a recent quarterly earnings call. “That’s a risk factor that we did not adequately plan for.”

In the first two weeks of January, traders reported more cars were being placed at western origins. Still, “it’s never enough to handle demand,” a veteran trader noted at the time.  By the third week of 2022, rail performance had improved even further. Shippers and millers were encouraged by a hefty number of cars delivered to origins for loading.

Grain traders were told to expect cars for sale at auction either Jan. 31 or Feb. 7. As many as 500 cars per period were expected for April-June, “maybe even March-April-May,” another trader said.

More equipment availability and timelier placement of ordered cars had some in the market expecting an uptick in forward contracting of hard red winter wheat, or at least a jump in cars loaded for immediate sale.

“We’ve come down a dollar, which is rare; Kansas City basis moves more often are measured in penny moves rather than dollars,” the trader told Milling & Baking News, a sister publication of World Grain.

The average January shuttle secondary railcar bid-offer per car was $1,588 above tariff in the week ended Jan. 13, down $1,171 from the previous week and $1,113 higher than the same week in 2021, the USDA’s Agricultural Marketing Service said after appraising data from James B. Joiner Co. and Tradewest Brokerage Co. There were no non-shuttle bids or offer that week, the AMS said.

Freezing temperatures have slowed shipping on several US rivers that serve as vital shipping lanes, the USDA said in its latest weekly Grain Transportation Report.

Mississippi River barge movements have been slowed by freezing since early January, the USDA said. One of the most problematic sections is the St. Louis-to-Cairo stretch of the Lower Mississippi, where freezing and low-water conditions are slowing operations and reducing allowable tow sizes. The 273-mile-long Illinois River stretches from Joliet, Illinois, US, to Grafton, 25 miles northwest of St. Louis, Missouri, US, where it joins the Mississippi River. The Illinois also has seen tow-size restrictions and beginning in the second week of January, locks have required ice coupling, which is a method of connecting barges to one another with freezing water.

High water conditions in the Ohio Valley and snow and ice adjacent to Cincinnati have delayed barge movements on the upper Ohio River.

“Since the second week of January, high spot barge rates have reflected these multiple, widespread logistical challenges,” the USDA said. “The barge industry is operating with extreme caution and preparing for unfavorable weather and water conditions for the rest of January.”

Barged grain movements in the week ended Jan. 15 totaled 491,988 tons, down 10% from the previous week and down 46% from the same period in 2021, according to the US Army Corps of Engineers. In the same week, 297 grain barges moved down river, 53 fewer barges compared with the prior week. There were 830 grain barges unloaded in the New Orleans region, two fewer than the previous week, the Corps and AMS said.

The US Department of Transportation, under the auspices of the Federal Motor Carrier Safety Administration, seeks applications for fiscal year 2022 financial assistance for implementing commercial driver’s license (CDL) programs, the AMS said.

“State and local governments and other eligible persons and organizations that support CDL program implementation are encouraged to apply,” the USDA said. “In identifying prospective aid recipients, FMCSA seeks programs that would further its strategic goals for CDL programs. The goals address areas of safety, economic strength and modernization, equity, climate and sustainability, and innovations for the future.”

Following are the average weekly on-highway diesel prices per gallon by region on Jan. 24: 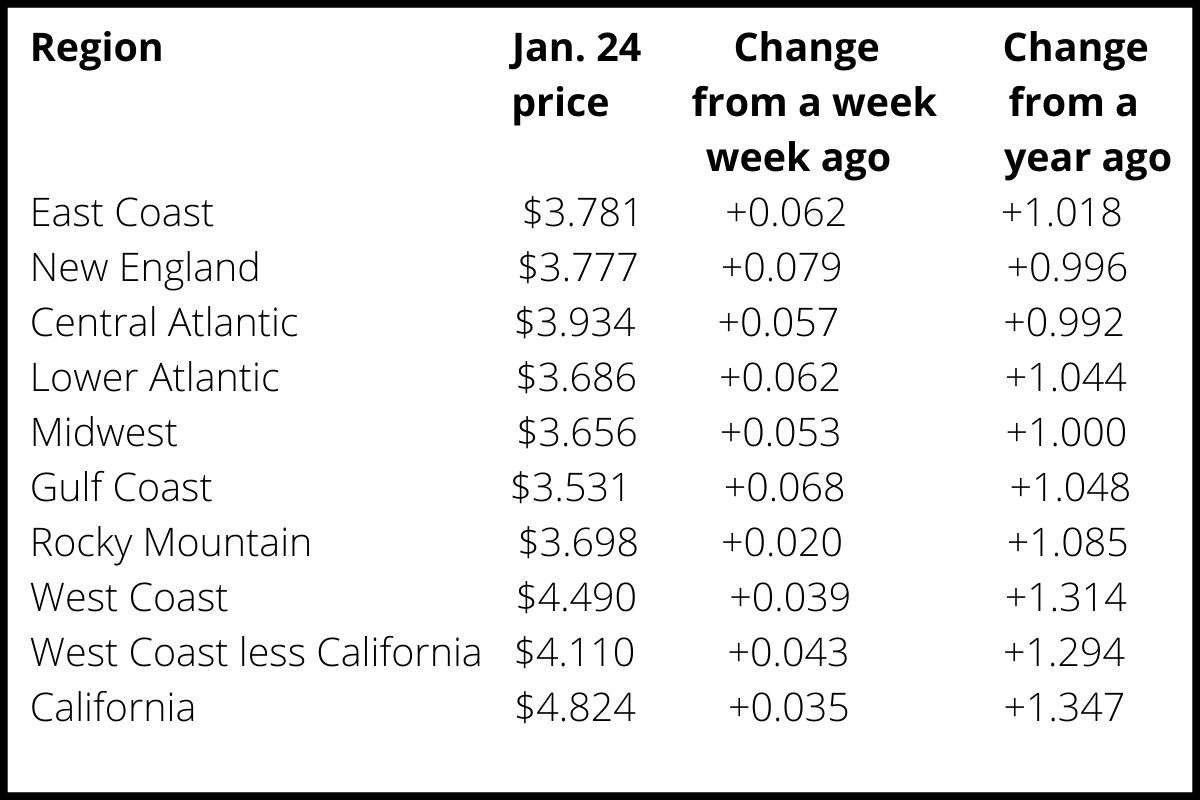