We use cookies to provide you with a better experience. By continuing to browse the site you are agreeing to our use of cookies in accordance with our Cookie Policy.
Home » Bountifield looks to expand its reach

Bountifield looks to expand its reach

In 1981, a group of retired food technologists and technical experts from General Mills founded Compatible Technology International, a not-for-profit organization whose goal was to develop technology for small-scale farmers in the developing world. The organization developed and delivered threshers, dryers and other post-harvest equipment to farmers in countries such as India, Guatemala, and the Philippines.

Today, the Minneapolis, Minnesota, US-based group has narrowed its geographical focus to sub-Saharan Africa and changed its name to Bountifield International, which better reflects the evolution of its mission. It also has a new goal: to reach 10 million people by 2030.

“Bountifield is not a real word but sort of an aspirational term, and we wanted to step into that larger role,” Alexandra Spieldoch, chief executive officer of Bountifield, told World Grain. “We aren’t working with the big companies in Africa but if we can get our tools to rural areas and small-scale entrepreneurs who are supplying food to those companies, we think that’s where a real bottleneck has been in terms of their growth. There’s a huge opportunity for sustainable growth there, particularly in the food and agriculture sector.”

While there’s an overall lack of basic agriculture equipment in most sub-Sahara Africa nations, Bountifield focuses much of its research and development on post-harvest technology. The United Nations’ Food and Agriculture Organization (FAO) estimates that as much as 37% of food produced in Sub-Saharan Africa is lost between production and consumption. Its post-harvest loss estimate for cereals is 20.5%. 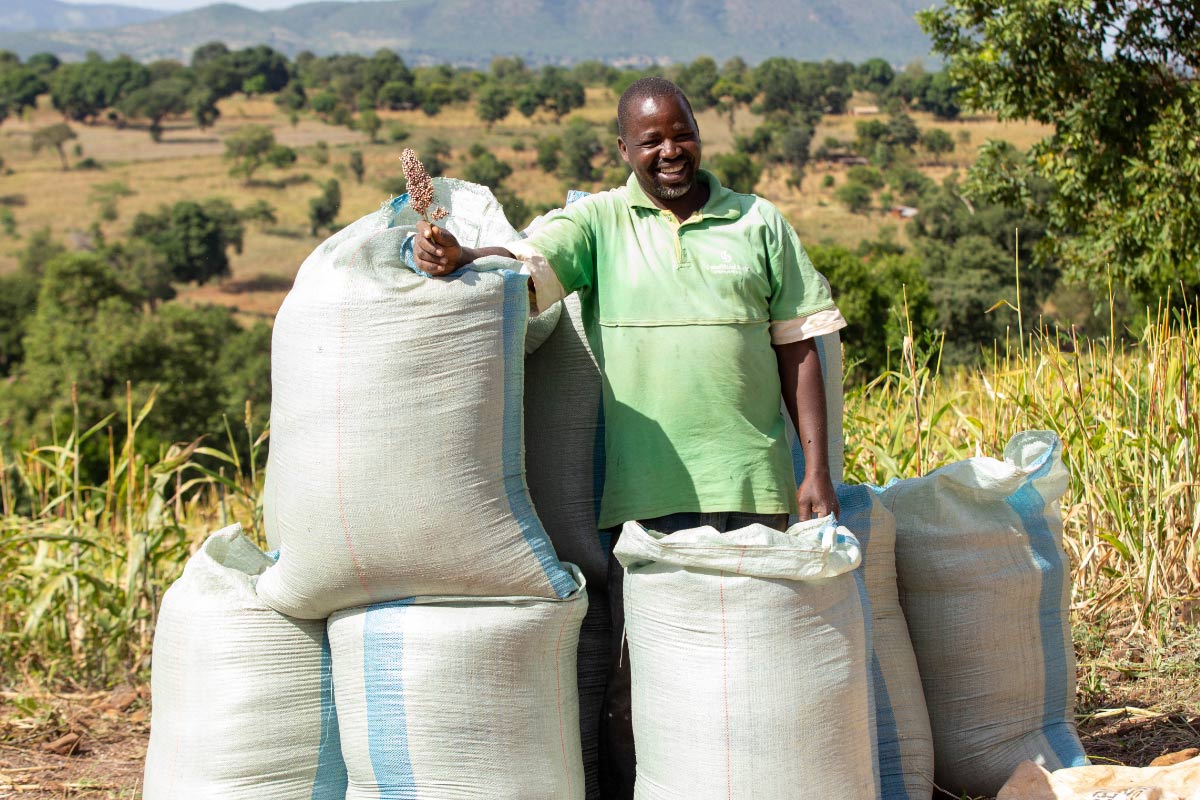 A farmer with bags of freshly threshed sorghum.

“There’s a statistic I heard at one point that in agricultural investment only 5% actually goes to post-harvest and the majority of that is in storage,” said Stevie Kloeber, communications and marketing manager for Bountifield. “We’re talking about a global population that’s growing and we’re going to need more food to feed them all. But it doesn’t matter if you produce more food if you can’t solve the problems on the post-harvest side. You still haven’t expanded the capacity and amount of food you can get to people.”

Spieldoch gave specific examples of how the organization is making a difference. Its most recent successes include improving the quality of cassava with post-harvest drying technologies and providing sorghum threshing services to Kenyan farmers.

“We provide tools and training so Elhadji’s village in Senegal can save more food from their harvest and nourish their community,” Spieldoch said. “We work with women like Fatou, who uses our thresher and grinder as part of her thriving business creating income generating food products like millet flour or peanut paste. We partner with the African private sector to manufacture and distribute our tools in the same economy where they will be used.”

Accomplishing this mission isn’t as simple as dropping off tools in a village and training workers to use them, Kloeber said. Even when tools are available in the market, end-users are often left without after-market technical support, she said, noting that Bountifield provides technical training for not only the end-users but for other individuals in the community to maintain technical resources that are locally available.

“There has to be an additional understanding of how to maintain the tool, clean the tool and fix the tool, as well as many other aspects of it,” she said.

The challenge for Bountifeld is, and always has been, finding a way to distribute technology in a population that has very little capital, Spieldoch said.

To do this, Bountifield focuses on engaging what it calls “the missing middle,” which refers to the micro, small and medium enterprises (MSMEs) that comprise 90% of registered businesses in Africa and employ 60% of the country’s workforce. Despite large investments in African development, very little of it reaches this middle demographic for establishing and growing their businesses, Spieldoch said.

“The missing middle includes a large swath of the population in the agricultural or rural sectors that really could be a pull factor for new market development,” she said. “There is new thinking on how to better reach these smallholder farmers. It’s not to give away equipment or just drop it off in a community and see what happens but to actually create a market-led approach where somebody is an actual customer for a technology, and they see a genuine return on investment for that. By focusing on the missing middle, the food and agricultural market growth will be much faster than it would be otherwise.”

Kloeber said Bountifeld reaches smallerholder farmers through fee-for-service businesses in what she calls a “one-to-many approach.”

“One threshing business can reach hundreds of farmers with a single multi-crop thresher,” she said. “By working with these entrepreneuers on their businesses, it develops and expands technology support services for farmers without the farmers having to invest in each piece of technology they need.” 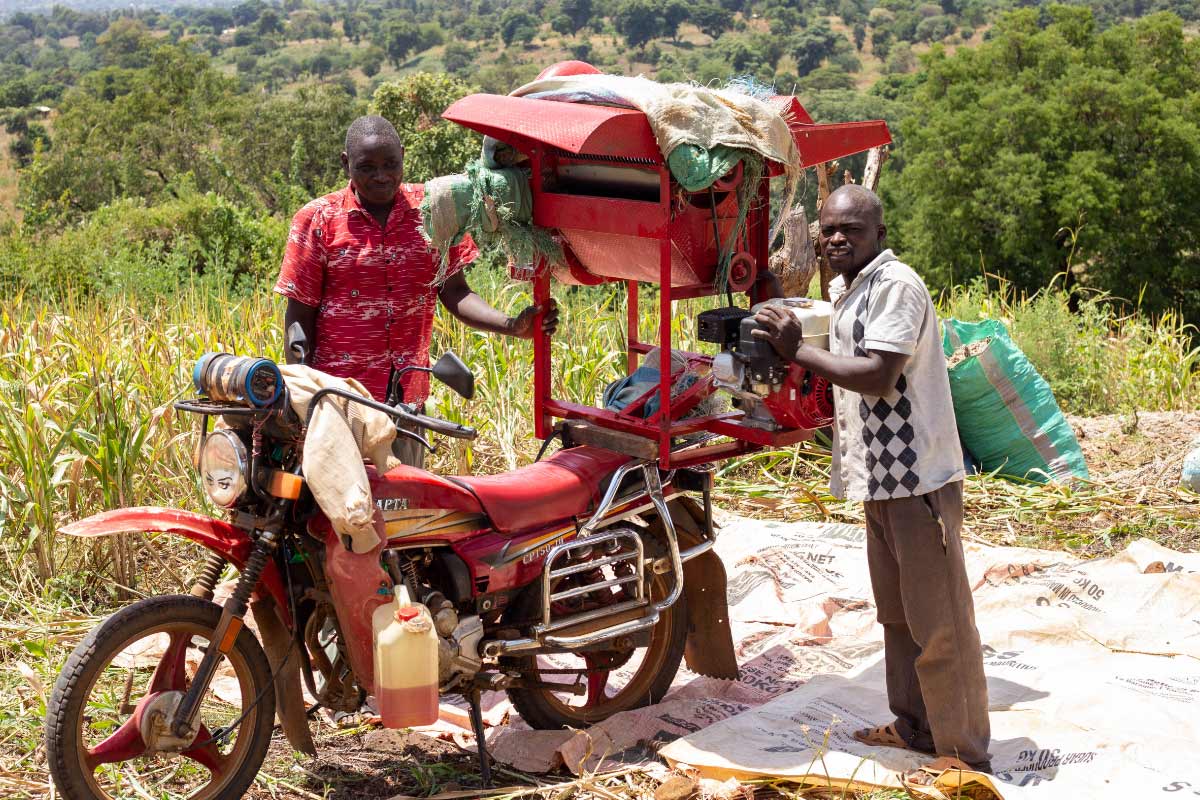 Equipment designed for small-scale farming can be mounted on motorbikes for transport to rural areas for mobile processing, making mechanized labor more accessible for smallholder farmers.

Bountifield’s goal is to not only mechanize post-harvest processing in sub-Saharan Africa but to support entrepreneurial development in rural communities to cultivate a thriving agriculture industry and resilient food systems. Spieldoch said the organization is “doing a job the private sector isn’t ready to do yet.” This may include providing mentorship on a range of topics from financial management, product pricing, and marketing best practices.

“For the private sector, it is risky to invest in the market we’re in as it can be quite costly,” she said. “We are creating a future market for the private sector. As a non-profit we can assume some of this risk. We not only are bringing new technology to the market, but we’re also working to create more demand for that technology by working with entrepreneurs and helping them develop a strong business plan for what they’re doing. We use donor support to help with co-investing.”

Bountifield is working to expand its donor base, which primarily has consisted of corporate sponsorship from General Mills as well as individual donations, including current and former General Mills employees.

General Mills also is well represented on Bountifield’s board of directors, which over the years has included representatives of other Minneapolis-based companies such as Cargill and Bühler.

“We have a history of individual donor giving and we also receive grants and are currently finishing up some work through the McKnight Foundation and USAID’s Feed the Future,” she said. “So, we’re a mix of private and public (funding). One of the things we are wanting to expand is our corporate partnerships and corporate sponsorships, giving packages where we can really get a whole movement of experts in a sector who are really behind this work and really want to give back.”

To date, the biggest obstacle Bountifield has faced, Spieldoch said, is garnering the funding to execute its mission. The organization has accomplished many of its goals in terms of improving post-harvest efficiency in sub-Saharan Africa — Spieldoch estimates the program has touched “hundreds of thousands of lives” — but more funding will be needed if Bountifield is to reach its stated goal of reaching 10 million people by 2030.

“Together we can build a more bountiful future where the persistent cycle of hunger and poverty in Africa no longer exists,” she said.

To learn more about the organization or to make a donation, visit: https://bountifield.org.

Bountifield International is a diverse organization both in terms of the makeup of its staff and board of directors. The 11-person staff, led by Alexandra Spieldoch, chief executive officer, features women and men from the United States, the UK and as well as several African countries. The governing board members are also a mix of men and women with diverse backgrounds.

Although agriculture is generally considered a male-dominated occupation, in Africa women are responsible for most postharvest labor yet lack resources to help make their work efficient.

“Our solutions support women with resources they need to increase their entrepreneurial skills and create opportunities to expand their own agribusinesses,” Spieldoch said. 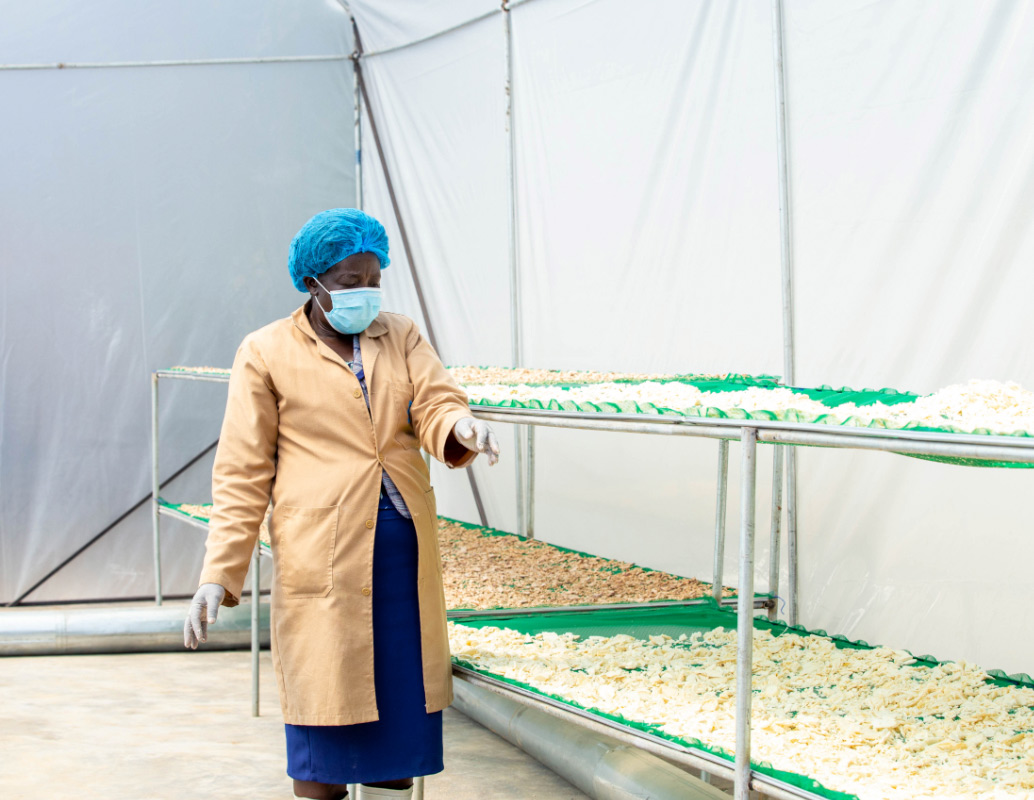 A member of a farm cooperative inspects the progress of the cassava being dried inside the solar dryer.

Spieldoch noted that a gender divide exists in these African countries, just like it does in most parts of the world. Women account for 60% of the agriculture workforce, yet women have less access to beneficial resources that are often available to men, including business education, technical support, and financial capital.

“When you get into some of the cash crops and larger market opportunities, you will begin to see men,” she said. “Women are the ones shelling peanuts by hand or what have you and they also are the ones preparing meals for their families, so anything we can do to save women’s time and labor is critical. The tools that we provide are the pathway to doing that for them.”

On its website, Bountifield cites a UN FAO study that found if women around the world had the same access to agricultural resources as men, they could increase farm yields by 20% to 30%, feeding an additional 150 million people a year.

In a similar inequitable situation are Africa’s youth, who are three times more likely to be unemployed than adults. That is an important statistic considering Africa is one of the youngest continents in the world with 60% of its population under the age of 25. By comparison, only 33% of the US population is in that age demographic. According to projections, Africa is the only region in which this segment of the population is growing, and that trend is expected to continue in the coming decades.

Because of limited job options, much of sub-Saharan Africa’s rural youth population is migrating to more urban areas in search of economic opportunities, leaving family farms and rural communities vulnerable to an unstable future, Spieldoch said.