We use cookies to provide you with a better experience. By continuing to browse the site you are agreeing to our use of cookies in accordance with our Cookie Policy.
Home » Kazakhstan ramping up feed output

Over the past three years, Kazakhstan has nearly doubled feed production, but the real growth is yet to come as the country is going to great lengths to become the biggest meat exporter in Central Asia and will need a lot of feed to achieve that goal.

Feed production in Kazakhstan jumped from 735,000 tonnes in 2016 to 1.27 million tonnes in 2018, said Louisa Tochieva, analyst of the local consulting agency ID-Marketing. About 71% of the feed was produced for poultry, 18% for cattle and 6% for pigs, Tochieva estimated.

The North Kazakhstan Oblast harvests on average 5.5 million tonnes of grain per year, and so there are huge reserves to increase feed production, said Aksakalov. The new feed mill would process local wheat plus some oilseeds, he added. An important feature of that project is that it is set not only to meet the demand for feed of local farmers, but also to export some feed, Kazmeal reported.

The government expects similar projects to be commissioned in the coming years as the investment attractiveness of the Kazakh agricultural industry is clearly on the rise.

The domestic feed industry in Kazakhstan is concentrated in three regions, according to ID-Marketing. In 2018, 29% of all feed in the country was manufactured in Almata Oblast, 15% in Akmola Oblast and 12% in North Kazakh Oblast, commented Tochieva. There are 14 regions in Kazakhstan. 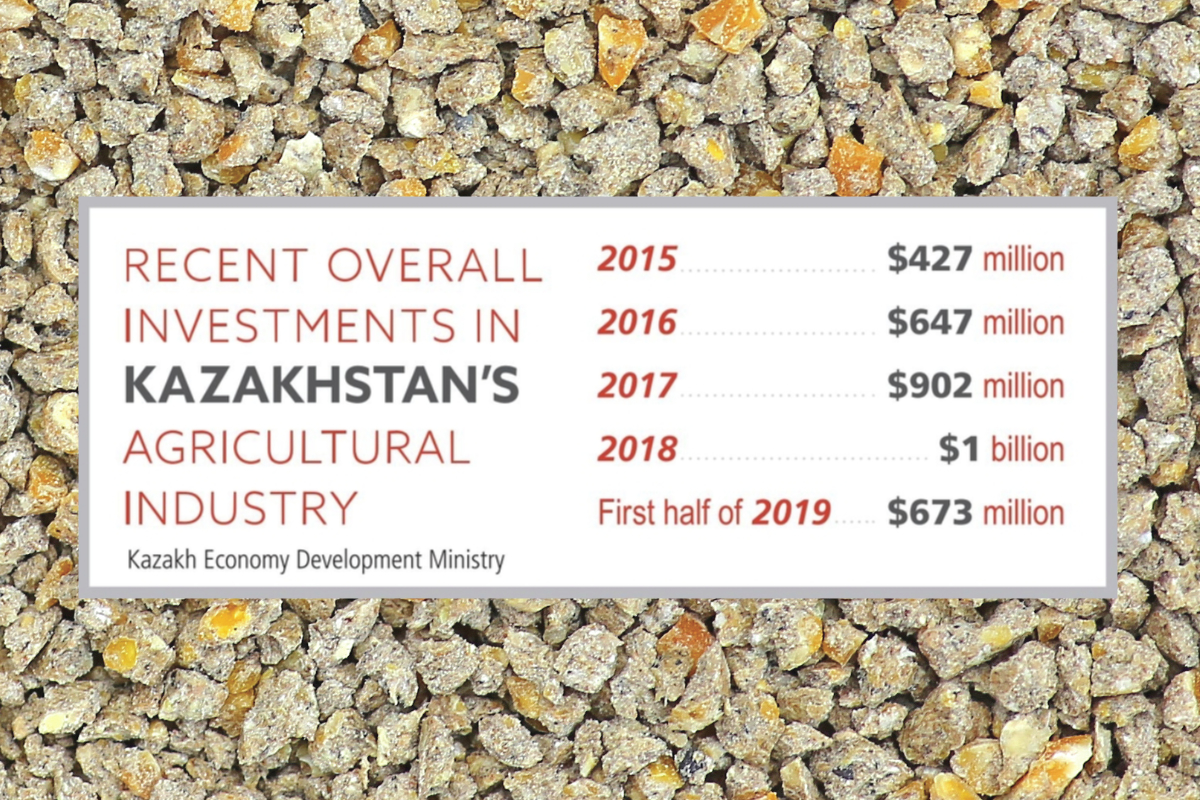 The growth in production in recent years is nothing more than a prelude to the full-fledged expansion of the Kazakh meat industry, which will drive up the demand for feed.

These are not unrealistic dreams, as there are four major poultry farms currently under construction in the country, and they would significantly increase both poultry and feed production, Sharipov stressed.

“The common model is that all new poultry farms built in our country have their own feed production capacities,” Sharipov said. “This is necessary in order to cut production costs. There are few independent feed mills in the poultry industry, but they are mostly meeting the needs of backyard farms, not commercial farms.”

The increase in poultry production should turn Kazakhstan from a net importer of poultry meat to a net exporter, Sharipov said. The import-replacement on the domestic market is ongoing, as new poultry farms are pushing cheap and low-quality imported products of the U.S.-origin out of the domestic market, but this is only a short-term achievement. The long-term goal, Sharipov added, is to make a debut on the international market and begin exporting supplies to neighboring Asian countries, including Tajikistan, Turkmenistan and China, as well as to the Middle East.

“We believe that the growth in feed production during this period (between 2018 and 2027) would be correspondent to the increase in the domestic poultry production,” he said. “I don’t think that we would see some strong increase in feed exports, because we have a big domestic demand to meet, and manufacturers usually establish production capacities to meet their own requirements.”

Kazakh pig farmers also are ramping up production. On Sept. 25, the country signed an important trade deal with China for the export of pork and live pigs. Kazakhstan is a predominantly Muslim country, and the domestic demand for pork has been shrinking over the past decade, the Agricultural Ministry estimated. The new deal is a cornerstone of the recently approved industry development strategy.

“Let’s take India as an example,” said Victor Lim, chairman of the Kazakh Union of Pig Farmers. “Local population doesn’t consume beef, and yet taking advantage of good climate conditions and natural resources, they became the second biggest exporter of this type of meat in the world. This is what we must target.”

With the new deal, Kazakhstan would be able to boost the pig population by a factor of 2.5 times and export up to 100,000 tonnes of pork per year, Union of Pig Farmers forecasted. The country has all the necessary resources to achieve that goal. There is a strong surplus of grain on the domestic market, and most of all, it is one of the few countries in the region still free from African swine fever (ASF).

The Union of Pig Farmers and the Kazakh Agricultural Ministry believe that it makes no sense to sell grain to foreign countries, where it is being used to manufacture feed and to obtain some products with high added value, Lim told local press earlier this year. Pig farmers estimated that the net profit from using wheat and barley to produce feed and then exporting pork is by a factor of 19 times higher than from simply exporting grain, Kim added.

The picture is similar in the beef industry, where the government is investing a significant amount of money to expand export supplies.

“In 2018, Kazakhstan exported 20,000 tonnes of beef, increasing this figure almost by a factor of 4 times as compared to the previous year,” said Umiezak Shurkeev, Agricultural Minister of Kazakhstan, speaking at a press conference earlier this year. “The long-term goal is 60,000 tonnes. The government allocates state subsidies and soft loans to family farms and small-scale business.”

The key target of the agricultural policy of the Kazakh government is to generate more products with high added value. In 2018, Kazakhstan was the world’s 10th biggest grain exporter by value, generating $965 million from selling wheat to foreign customers, according to World’s Top Exports. The country, however, no longer wants to be what local politicians used to call a “raw material colony.”

“Kazakhstan will need to manufacture around 7 million tonnes of feed per year to meet the growing domestic demand,” estimated a spokesperson of the Kazakh government who wished to not be named. “We see some extremely rapid growth in the meat industry, thanks to some big investors from China who are considering our country as a safe harbor, as the entire continent is literally on fire because of the continuing spread of ASF. There are also some investors from Russia, and our own companies, of course.”

Basically, Kazakhstan is switching to a new model of agricultural production in which feed is a bridge between low-price exports and products with high added value, the source stressed. It is especially important in respect to climate change, which is an enormous challenge for the Kazakh agricultural industry, he added.

Kazakhstan grain production may shrink by 37% by 2030 because of the climate change, the World Bank said earlier this year. It was estimated that 66% of the territory of Kazakhstan is vulnerable to drought. The rising temperatures may cause water shortage in Central Asia, disrupting irrigation of large territories. If no effective measures are taken, Kazakhstan could see its domestic grain harvest shrinking by as much as 50% by 2050, the World Bank warned.

Erlan Zhymabaev, technical director of United Nations Development Programme in Kazakhstan, said international funds and local authorities already have spent $14 million to address that challenge. Zhymabaev said the primary focus was to educate farmers about how the bad weather conditions could be managed, plus the authorities are urging farmers to shift from wheat and barley to more drought-resistant crops.