How many days have gone by since the word “weather” fell from your lips? How many times in the past week have you heard the news wire services use weather as the cause for adversity somewhere in the world? Weather still has to be the most often discussed, feared and celebrated subject matter impacting the human condition. Sometimes weather gets falsely accused for things unexplained and it is always on the forefront of agricultural commodity traders’ and farmers’ minds.

The past few months have brought on a new slew of weather extremes that might have had a greater influence in the world marketplace in a different year. It is amazing all of the extremes that occurred in the past few months and yet commodity futures prices are not far from the doldrums of earlier this year. Weather was responsible for some scares around the world and a short-term run up in market futures prices. But after all of the extremes had been experienced, weather cannot be blamed for where we are in the futures markets relative to earlier this year.

We are now entering the final one-third of 2019, and if it finishes out half as exciting as the first two-thirds of this year, we will still not be bored. The year began quite cold and wet in North America. The wet bias delayed the onset of planting in the spring, but it was not until mid-May that suddenly it was realized that the weather was not allowing farmers into their U.S. fields, and the same was happening in southeastern Canada while the Canada Prairies were dealing with a third year of drought and later-than-usual frost and freeze events prolonging the start of aggressive planting. In North America, the wet winter and spring set the stage for the following few weeks of fear and concern because if it had not been for the delayed planting, U.S. crop production this summer would have been huge due to timely rainfall and no excessive heat. As it turns out, that became the reality in August when drought-like conditions in the heart of the Midwest gave way to timely rain, and crop conditions began to improve.

Several weeks of dryness during early to mid-summer in the heart of the U.S. Midwest stressed some of the poorly established summer crops, and for a while raised the potential for production failures. However, it never got hot. Once again, despite the advice of some meteorologists, the solar cycle provided a cool finish to the summer, which bought stressed crops some much needed time so that when August rainfall evolved, plants were still viable to develop aggressively. 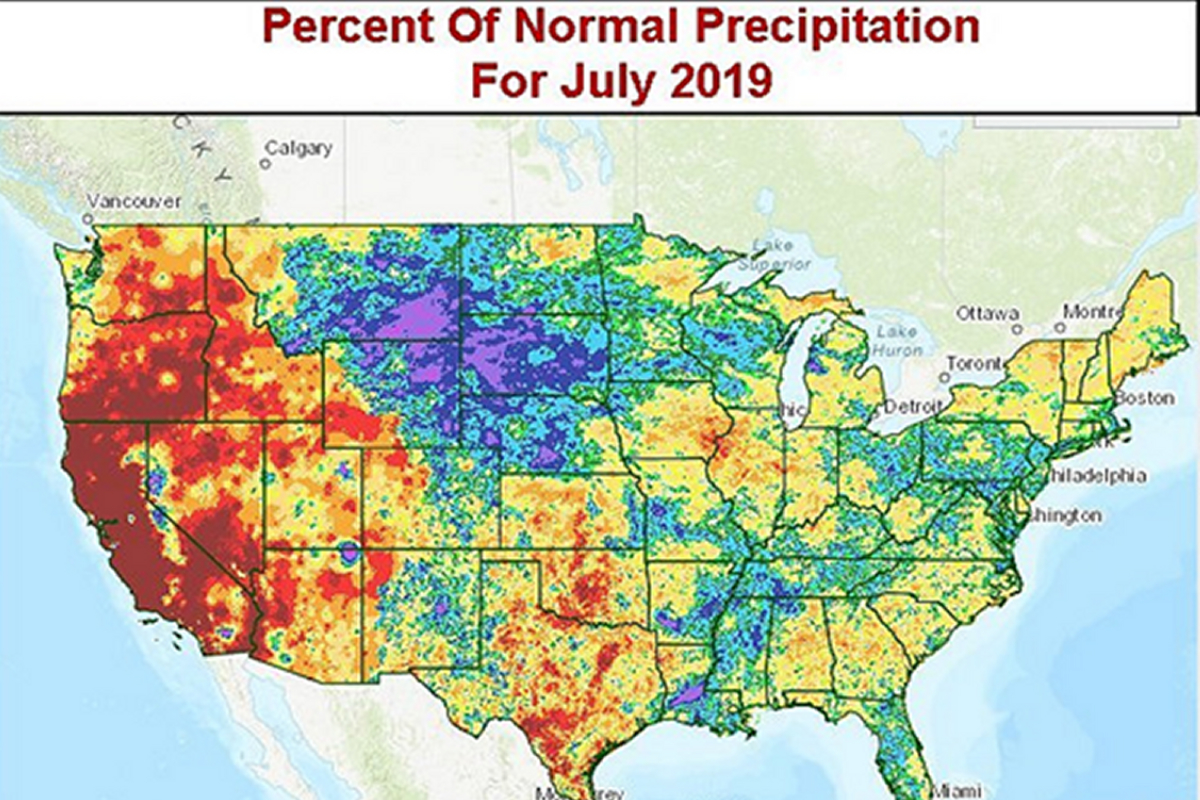 In the meantime, El Niño (which never really had much influence on the world’s weather this year) steadily weakened in the third quarter until finally pronounced dead. This year’s El Niño never had much impact on Southeast Asia until it was going away, and then six to eight weeks of significantly negative Southern Oscillation kicked in to squeeze the southwest monsoon dry in India, diminished rainfall in much of Southeast Asia and perpetuated severe drought in eastern Australia. Interestingly, while El Niño was proclaimed dead, some of the driest conditions of the year were noted in mainland areas of Southeast Asia, parts of India, eastern Australia and in Indonesia. Despite the crop stress and news of adversity, there was little interest in the marketplace.

Weather in Europe and the western Commonwealth of Independent States (CIS) then tried to move the markets with two heat waves that the media was all over, but the impact was not nearly as great as last summer’s drought in Europe and the western CIS, leaving little incentive for a long-term response. Temperatures set records for the hottest conditions since record keeping began in France, Belgium, the Netherlands and parts of Germany, but it only lasted three days, and conditions since that time were not nearly as harsh and the media blitz covering the event was over. Western Russia experienced some of the most unusual weather this summer. For about five weeks temperatures were well below average in the western half of the nation. Temperatures were cold enough for frost and freezes to occur about three to four weeks earlier than usual in some northwestern Russia locations, but the interest in that event was even less than the heatwave in Europe.

Drought also impacted western Canada’s Prairies for the third spring season in a row, causing delayed planting and stressing young plants and seedlings to the brink of failure. That weather event was also quite impressive, but it began raining for about one week to 10 days in late June, and sufficient rain fell to save many crops in the western Prairies. The growing season since then has not been nearly as extreme.

China, too, had its weather moments during the spring and early summer. Drought like conditions evolved in the North China Plain for several weeks and, similar to the Canadian Prairies, some of the spring planting was delayed and some crops got off to a poor start. Timely rain then began in July and increased into early August, restoring favorable soil moisture and stopping any declining production trend that had begun earlier in the growing season. Some of the scars from the early-season drought are still present, but that has not done much to stimulate market interests.

There also have been extremely wet conditions in recent weeks. Southern China was rainy in the spring and early summer, but actually dried out a little too much in late August. Another wet region has been in the northern Philippines where rainfall in northwestern Luzon Island, Philippines, ranged from 44 to 56.38 inches Aug. 1-26, with other west coast locations reporting 20 to 37 inches in only 26 days. Southwestern Myanmar (where 56% of the nation’s rice is produced) reported 20 to 60 inches of rain in the same 26-day period, and the forecast was calling for another 12 to 20 inches of rain in the following week to end in the first days of September. These are incredible extremes in weather and yet look where the futures markets stand.

The next most incredible event may soon be here. Some U.S. forecasters are beginning to buy into World Weather, Inc.’s July 30 forecast of normal to earlier-than-normal frost and freezes in the northern Plains and northern Midwest during September. Will that be the final straw that will drive futures prices higher again? Maybe not, as much will depend on how hard the frost and freezes are and where they occur relative to the most immature crops. At the bare minimum, it will be the single most talked about event in September and it may give weather one more opportunity to move markets higher.

We can blame the weather for just about everything that happens in the world these days, but you cannot blame it for the market doldrums. There have been many opportunities for the impact of weather to shorten world production, but so far those have only been “opportunities” and not realities. It makes you wonder if changing weather really does have that much impact on future production.