A sharp upward revision in the U.S. Department of Agriculture’s forecast in the Aug. 12 World Agricultural Supply and Demand Estimates for the U.S. 2019-20 maize crop sent prices lower in mid-August.

In a weekly newsletter published Aug. 20, the European Confederation of Maize Production (CEPM) described the upward revision of the U.S. crop by 660,000 tonnes “surprising for all market observers.”

CEPM noted that other bearish elements include pressure from the South American harvest and the outlook for Ukraine.

“With the end of the harvests, the first acreage forecasts for the new crop year are emerging in South America,” CEPM said. “In Brazil, the maize acreage will depend on soybean sowing, but farmers should be encouraged to sow maize because of good conditions this year.”

The European trade group also said Maizar, the organization of Argentinean producers, “expects an acreage increase of 5% to 10% for the same reasons, but the political context should still be monitored with the presidential election in October.”

It explains that President Mauricio Macri, who has undertaken to end export taxes on agricultural products, unlike his opponent, is struggling in the polls.

“Moreover, the prospect of Macri’s defeat contributes to the fall of pesos rates,” CEPM said. 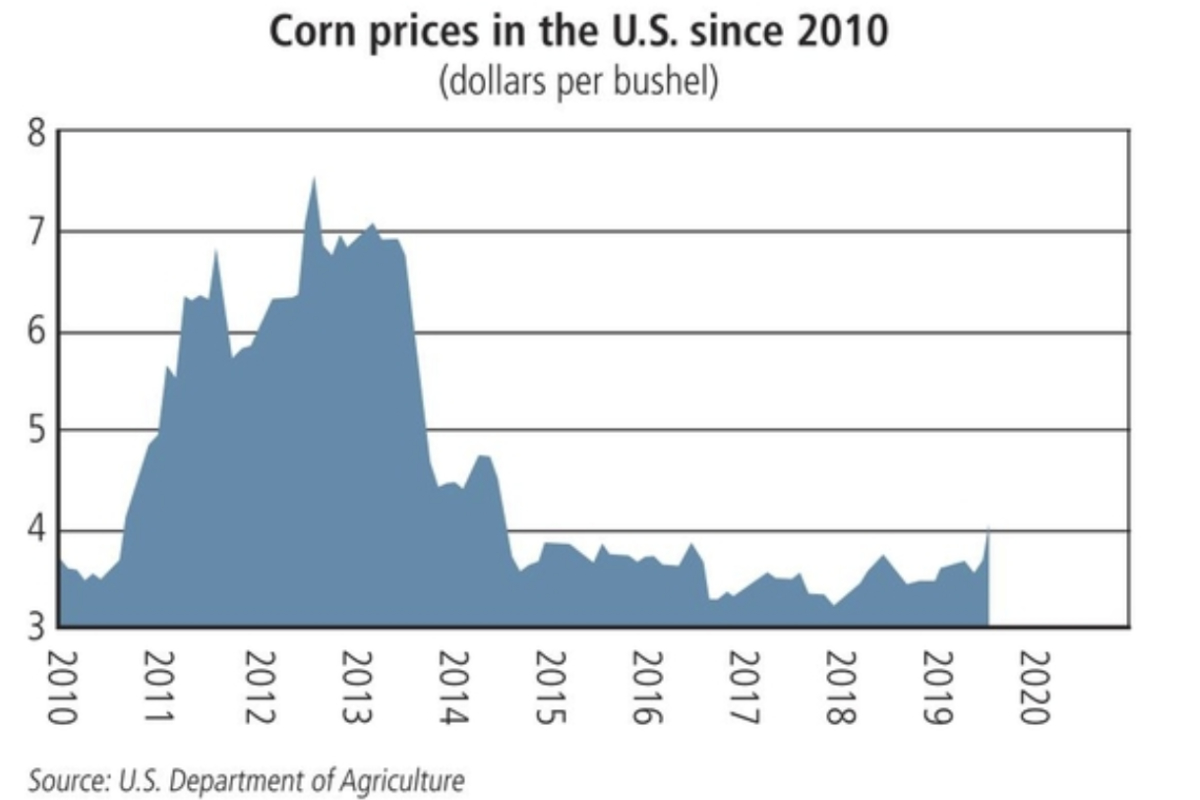 At the same time, the level of European maize imports has been high since July 1, particularly in Benelux (Belgium, the Netherlands and Luxembourg) and Spain.

“Operators in these countries are protecting themselves in the face of uncertainties about the French harvest, the weakness of the Ukrainian stocks from the old harvest, and the good competitiveness of Brazilian maize,” CEPM said. “However, the maize import projection for the 2019-20 crop year is down from the previous crop year due to the good availability of straw cereals.”

“Funds were holding a slight long position heading into the (USDA) report and have since largely exited that and are believed to be neutral or slightly short corn,” the Council said. “Looking forward, summer crop tours will bring additional yield forecasts to the market’s attention and early reports suggest final yields may be lower than the USDA’s latest estimate.”

As well as the surprise change for maize, the USGC also reported that the United States had increased its forecast for the country’s 2019-20 sorghum crop by 15% to 7.707 million tonnes.

“The agency increased its expectations for feed and residual use but kept its export forecast unchanged, leaving a 23% increase in ending stocks,” the USGC noted.

There were few changes for barley, with yield revised up by 1%, while the oat yield was revised down by 2%.

“Internationally, USDA increased the world corn 2019-20 production estimate to 1.108 billion tonnes on larger crops in the U.S., Ukraine and the E.U.,” the USGC said. “The E.U. crop adjustments were made largely on much better-than-expected crops in Eastern Europe that outweighed the heatwave-reduced crops in France, Germany and Poland.

From a technical standpoint, December corn is stabilizing after its steep, post-WASDE selloff and is near major technical support, the USGC said

It suggested that “the market could bounce back from its recent lows, especially if crop tours continue finding spotty yields.”