We use cookies to provide you with a better experience. By continuing to browse the site you are agreeing to our use of cookies in accordance with our Cookie Policy.
Home » Ukraine’s meteoric rise in grain

Analysts agree that both output and exports can expand still further, but the country and its new president-elect, Volodymyr Zelensky, formerly a comedian, have plenty of challenges to overcome if they are to maximize the potential of one of the nation’s leading foreign currency generators.

The scale of that challenge was evident in early April when NATO announced it was considering a range of measures to counteract Russia maritime aggression in the Black Sea and to ensure safe passage of Ukrainian ships through the Kerch Straitv — a vital artery for many grain exports to global markets and a major point of conflict since Russia seized Crimea from Ukraine and illegally annexed the region in 2014.

“This package provides for enhanced surveillance, including air surveillance, and increases in the number of NATO ships in the Black Sea to ensure the safe passage of Ukrainian ships through the Kerch Strait and the Sea of Azov,” said Ambassador Kay Bailey Hutchison, the U.S. Permanent Representative to NATO. “It is very important that Romania, Bulgaria, Ukraine and Georgia have security guarantees in the Black Sea both for shipping and for safety on land.”

The declaration was in response to Russian harassment of Black Sea maritime traffic, the seizure of Ukrainian naval ships and sailors in November and the build-up of weapons in Crimea.

Dan Basse, president of AgResource, said the Russian threat to safe passage via the Black Sea was a major hazard factor for Ukrainian agriculture.

“That political risk is there, of course,” he said. “In terms of performance of exports, it’s a big deal. The problem is that it’s one of those political headline risks that is difficult to manage or include in economic modeling in terms of what the future looks like.”

Speaking at the Black Sea Grain Conference, organized by UkrAgroConsult and held in Kiev, the capital of Ukraine in April, he told World Grain the worst-case scenario would be the closure of shipping channels.

“If we had some blockages somewhere, that would be major,” he said. “Grain trading is becoming a little bit like oil trading where if you close a strait you will have this dramatic rise in prices. Closing the Black Sea would do the same thing, and so the problem is, ‘What’s the probability?’ And we don’t have any history to fall back on there, because Ukraine and Russia have mostly in modern history been on the same side, and now they’re fighting against each other. It is an issue going forward.”

Black Sea Grain was attended by nearly 700 delegates from 50 countries and a range of speakers highlighted the many supply chain bottlenecks the Ukraine’s grain exporters face aside from the ongoing conflict with Russia.

However, topping the frustrations list was the unpredictable service of Ukraine Railways. Although use of the country’s rivers is increasing, the growth rate of volumes shipped by barge has failed to keep pace with the surge in grain exports over the last decade, rendering Ukraine reliant on its creaking, state-owned rail system for export logistics (see table, page 47).

Speakers at Black Sea Grain agreed that railways management was inefficient and lacking in transparency. Moreover, even when private companies have invested in their own wagons, locomotives and infrastructure, they are still dependent on Ukraine Railways for network access.

“Why are we charged the same price as ore shippers and why is grain subsidizing passengers?” he said. “We feel at a disadvantage, we have a wonderful railroad, but we need to improve it.

“We were told they didn’t have enough wagons. They only had 11,000 wagons. But now there are also 11,000 private ones but the railways don’t look after the private operators. There’s a lack of predictability. There are examples of companies that have invested in their own capacity and been successful even working with Ukraine Railways, but it is rare.”

Oleksii Stupak, head of corporate business development at Credit Agricole Bank, said many producers and traders have suffered defaults in recent years. Finding reliable partners was difficult and risk increased due to the key role of Ukraine Railways.

“We’ll be producing 100 million tonnes of grain soon, but we need to invest in infrastructure, wagons, locos and storage in order to be more successful,” he added.

“We are major exporters, but there is no clear correlation between volumes and investment,” he said. “Our allocation of capacity is not clear from the railways.” 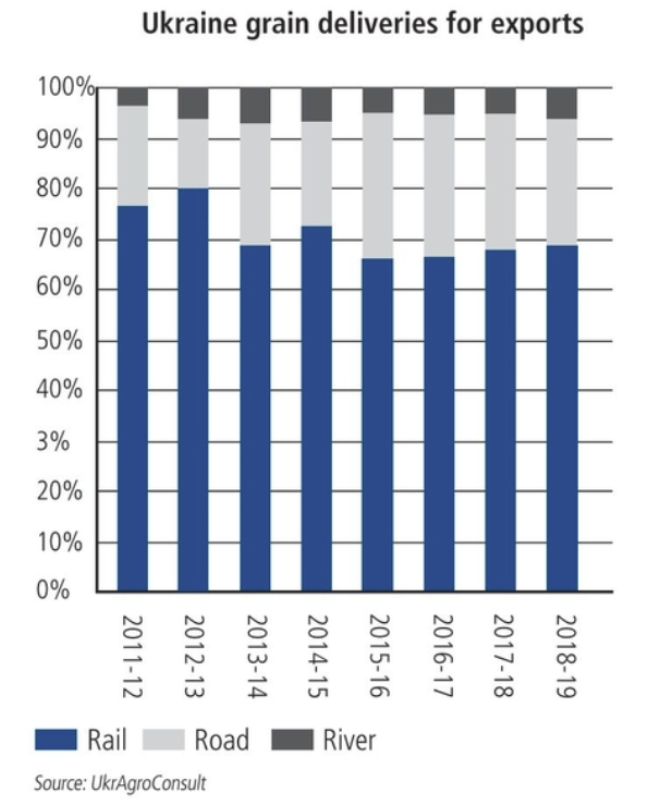 He said he did not understand why some forwarders with no wagons or elevators received ample allocations of block trains, but Kernel Trade with its own elevators and wagons only ever had a handful of block trains to serve them.

“We want answers on this,” he added. “Our rivals’ (shipments arrive) faster to the port. We want to understand this system. We asked Ukraine Railways, we told them how many tonnes we had, where it would be, and asked how we could get to port and in what time frame …. no answer.”

Sergey Feofilov, director general, UkrAgroConsult, said private companies had invested hugely in hoppers with the result that Ukraine now has more than 20,000 of which around half were under private ownership as of the start of 2019.

“The main point is Ukraine Railways has an exclusive right to access main railways and companies who have locos are allowed only to carry wagons from the silo to the nearest rail station,” he said. “That is a matter of legislation and probably it will be changed in the future.”

Some delegates also said they had constructed elevators near railway stations that they had now been informed would be shutdown.

Feofilov added that the decision by Ukraine Railways to increase turnover at grain hoppers by prioritizing silos that can load a block train had left those reliant on silos that cannot handle high volumes short of rail capacity.

“About 50 to 70 elevators (nationwide) are able to load a full fleet of 54 wagons in one shipment,” he told World Grain. “The rest of the smaller elevators have to wait.”

He also said the rail system’s interface with ports remained a bottleneck.

“The condition of railway infrastructure at port stations and the access roads to them is mostly unchanged from Soviet times,” he said. “Initially, all the infrastructure was built and outfitted for the processing of imports. But with the transition of seaports to exports, this has changed the nature of the work and expanded the range of goods. Several railway stations in Odesa, Yuzhny, Chornomorsk and Mykolaiv ports are no longer able to cope with the volume of incoming shipments.”

All of which reduces the competitiveness of Ukraine’s grain exports by driving up costs. “The grain delivering costs are higher because of this, but they are still cheaper than in Russia and Romania,” Feofilov said.

Delegates and speakers at Black Sea Grain were adamant that with suitable reforms, Ukraine can increase production levels and exports.

“The land available (for grain exporters) is also not always the prime farmland; it’s more the marginal land,” Ammermann told World Grain. “But as technology and the seeds gets better, for sure the Black Sea has always got upside potential.

“I think exports are going to incrementally grow, but if you jump forward probably 10, 15, 20 years, you should see exports grow substantially. But the government will have to allow for financing to become easier to get there.”

Gorbachev said war and sanctions had not stopped Ukraine from producing more grain and being a reliable supplier.

Leonid Kozachenko, longtime agrarian political champion and People’s Deputy for the Verkhovna Rada of Ukraine party, said if land and financing reform could be pushed through at national level, Ukraine could accelerate output and exports.

“Ukraine now has a leading position in the world grain market, and we hope this will improve,” he said. “We are harvesting 70 million tonnes of grain right now, but our potential is much higher. We can double production of grain and substantially increase trade in grain to world markets.”