World prices for rice have changed little overall in recent months, although they remain down compared to the first few months of 2018. Demand has remained subdued, with a forecast 2019-20 crop that is down slightly from last year’s record.

The U.S. Department of Agriculture’s (USDA) Grain: World Markets and Trade for May report said that “export quotes from the Western Hemisphere flipped over the past month, with U.S. quotes decreasing to $510 per tonne and Uruguayan quotes increasing to $528 per tonne.”

“U.S. sales and exports are expected to rise in the coming months amid plentiful supplies and more competitive prices,” the USDA’s Foreign Agricultural Service (FAS) said. “Western Hemisphere quotes continue to remain well above those from Asian suppliers.”

The FAS reported Thai prices down slightly at $399 per tonne, although a strong baht meant they were higher than for other Asian exporters.

“In contrast, Vietnamese and Indian quotes rose to $371 and $375 per tonne, respectively,” the FAS said. “Pakistani quotes were the lowest at $362 per tonne, reflecting ample supplies.”

“The largest projected reductions are for the two largest producing countries, China and India, with both area and yield forecast down,” the FAS said. “The United States is also projected to have smaller planted area and production.”

The biggest increases were for Thailand and Laos, with significant production growth also forecast for Bangladesh, Indonesia, Burma and Vietnam.

In its Rice Advocate for May 16, the U.S. Rice Producers Association described the trade as having “trudged forward making neither significant gains nor posting notable losses.”

“Looking at the export trends and cycles, it would appear that the purchasing of overseas buyers is becoming more cyclical or hand-to-mouth,” U.S. Rice said. “USDA seems to have sensed a soft underbelly to the market at this time as it has lowered its world market price estimate by 9 cents for both classes of rice.” 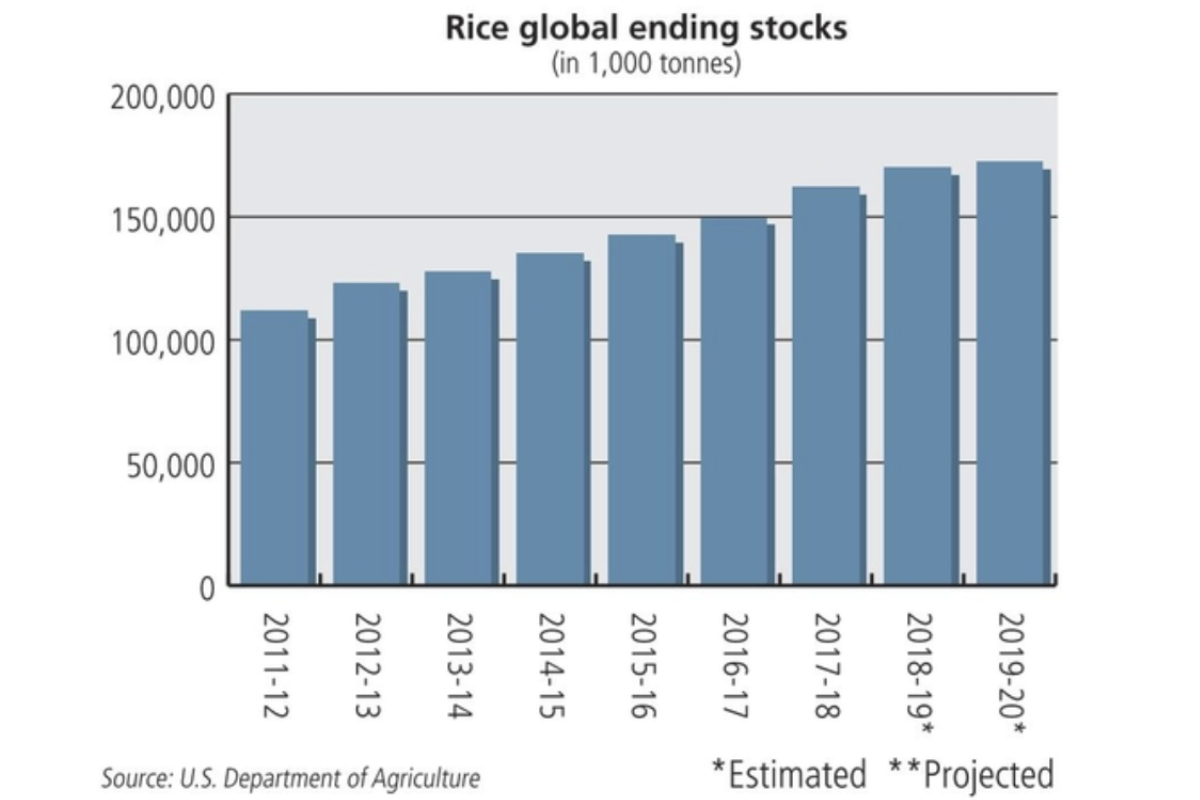 There had been no major changes in U.S. domestic prices in the preceding several weeks.

The FAO’s Rice Price Update for May put its All Rice Price Index at 222.2 points in April, almost unchanged from March.

“The most notable development in April concerned the Aromatic Index,” the FAO said. “It rose by 2.7% to an eight-month high of 217.2 points, buoyed by firming basmati quotations in the context of inflationary pressure in Pakistan and preparatory purchases ahead of Ramadan.”

In contrast, “the Japonica Index subsided by 1%, following the retreat of Japan and the Republic of Korea from the market and a turn of weather that raised planting expectations in California,” the FAO noted.

April quotations of Indica rice tended to increase across much of Asia, except in India and Myanmar, where prices dipped on poor buying interest and pressure from offseason harvests, the FAO said.

“In Thailand, concerns over water supplies for irrigation lent support to export prices, whereas gains in Pakistan came in the wake of increases to fuel costs and sales to East Africa and China,” the FAO said.

The Index showed that despite slight firmness in recent months, world rice prices from January to April 2019 were 2.2% below their level in the same period a year earlier.

“In Thailand, support from concerns that drought may curtail off-season production offset pressure from weak buying interest, with 5% quotes broadly steady at $388 per tonne fob Bangkok, with trade said to be quiet due to the Songkran festival,” the IGC said.

“Seasonal support from the end of winter/spring crop harvesting and demand from regional buyers, notably the Philippines, underpinned values in Vietnam, where 5% quotes gained $7/tonne to $367 fob Ho Chi Min,” the IGC said.