The resumption of U.S. soybean sales to China has helped to buoy the market in oilseeds, although traders warn that uncertainties remain. At the same time, a developing row between Canada and China threatens to divert trade flows in rapeseed. China’s demand for soybeans has been hit by a fall in demand for meal as the country’s hog herd is affected by African swine fever.

The USDA’s Economic Research Service (ERS) said in its March 12 Oil Crops Outlook that U.S. processors are getting healthy cash margins, even though they had narrowed following a rise in the cost of soybeans.

“Prices are steady for soybean meal and moderately higher for soybean oil,” the ERS said.

Prices were buoyed by the resumption of U.S. soybean sales to China.

“Nearly half of the February shipments were to China,” the ERS said. “Between December 2018 and February 2019, U.S. sales to China resumed after a six-month stoppage.”

“The U.S. market is drawing support from the possibility of further Chinese sales amid ongoing bilateral government discussions,” the ERS said. “Crop losses in Brazil are also stimulating more interest in U.S. soybean supplies. Export market developments are reflected in a modest rally for soybean prices. More time is needed to determine whether a higher price level can be sustained.”

The ERS reported a plunge in soybean meal and soybean oil values, weakening demand for beans.

“Prices for both commodities have fallen toward 10-year lows,” the ERS said. “For the first time in 12 years, feed demand for soybean meal in China is expected to decline.”

The ERS explained that the country’s hog breeding herd, in particular, has shrunk after efforts to control a widespread outbreak of African swine fever. 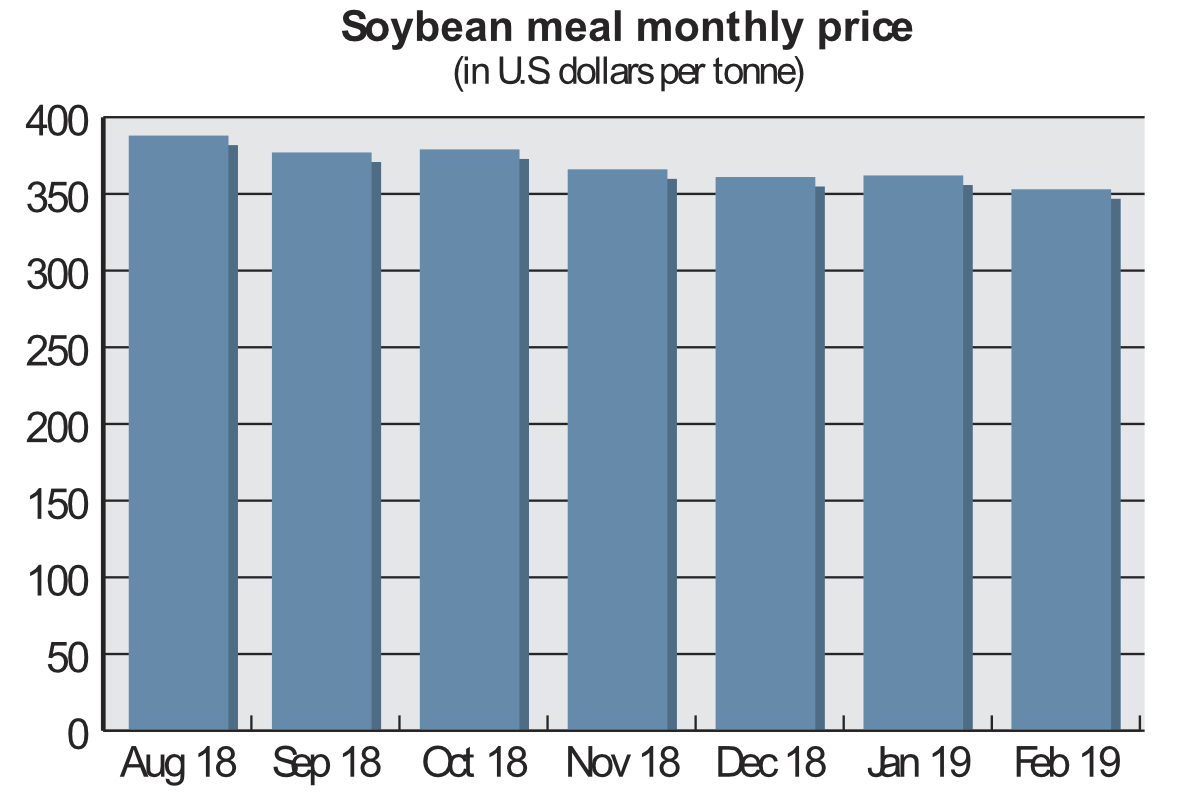 The International Grains Council (IGC) report published in late February said soybean prices were marginally firmer on the month, with modest gains in Brazil and the United States.

“Sentiment was largely shaped by South American weather outlooks, as well as perceptions about future export demand as U.S.-China trade negotiations continued,” the IGC said. “The market was initially supported by Brazilian crop concerns and news that Chinese state grain buyers had secured U.S. supplies. But prospects for ample global availabilities pressured, as did broader worries about U.S.-China trade talks.”

The Council went on to explain that more recently, signs that southern hemisphere crop conditions were stabilizing added to the negative tone. However, with basis levels moving up, Gulf export values rose slightly.

Export prices in Brazil firmed on weather in producing areas that the IGC described as “challenging,” along with robust early-season shipments and slow farmer sales. In Argentina, values fell marginally on currency movements and forecasts of a rebound in output.

The IGC said rapeseed was influenced by moves in the soybean, palm oil and energy markets with ICE canola down 3% and Euronext rapeseed down 4% on the month during February.

“Technical activity also pressured at times,” the IGC said, also noting that “cash prices in Canada were also weaker on the slower-than-expected underlying pace of shipments through mid-February.”

One feature potentially impacting rapeseed flows has been a row between China and Canada. Reuters news agency reported on March 5 that China had canceled the registration of Richardson International, Canada’s biggest grain handler, to ship canola (rapeseed) into the country. The agency said it wasn’t clear what China’s reason was but noted a continuing dispute between the countries over trade and telecoms technology.

The company said it had been told March 1 that its license had been revoked. Jean-Marc Ruest, senior vice-president, corporate affairs and general counsel at Richardson International, told the Bloomberg news agency that “we’ve never had our licenses suspended by China or by any other countries.”

“We’re hard pressed to see what it could be other than a wider issue between Canada and China,” Ruest said.

He told Bloomberg that China had said there were pests in rapeseed shipped by Richardson. Bloomberg said Canadian checks had found no infestation.