We use cookies to provide you with a better experience. By continuing to browse the site you are agreeing to our use of cookies in accordance with our Cookie Policy.
Home » Milling Ops: Finding the sweet spot

While global demand for hard wheat-based products such as bread has declined in recent years as consumers have shifted toward protein-rich, low-carbohydrate diets, there’s more promising news regarding products made from soft wheat flour.

Cakes, cookies, crackers and Asian-style noodles are among the soft wheat flour-based products that are gaining in popularity.

Hosafci notes that cookies and cakes offer the best prospects.

“Euromonitor predicts that the global cookies market will reach $76 billion in 2019, up from $60 billion in 2014, growing at an impressive 5% CAGR over the next five years,” he said. “The majority of this growth comes from emerging markets of the Middle East and Africa and Latin America, where cookies are the most affordable and popular snack of choice, prompting both local and multinational companies to innovate into novel occasions like breakfast and target groups like children and elderly.

“Cakes is another lucrative category surpassing $15 billion in 2019, with Asia Pacific taking the lead. The unprecedented innovation and dynamism of the artisanal market, in particular bakeries, underlie cakes’ growth. Noodles and pasta markets are also flourishing, with noodles making inroads into the Western markets due to the rise of the Asian cuisine and pasta gaining more popularity in Asia and the Middle East brought by the rise of the Italian-style restaurants.”

While hard wheat has for centuries been grown in numerous countries on all five continents, soft wheat is less geographically diverse.

“Soft wheat (SRW and SW) is pretty much produced in the United States,” said Steve Mercer, vice-president of communications for U.S. Wheat Associates. “Canada has a limited amount of SRW on the east coast and some SW on the west coast, but the production is small and exports total 200,000 tonnes in a good year. Other countries really don’t produce soft wheat with special classes like the U.S. and Canada.  Australia has a group of low protein wheat that can be used to make many soft wheat products, but the genetics are different and ASW is not really a soft wheat.”

All hard kernel wheats have since arisen via mutations in the Puroindoline genes. Globally, soft wheats have largely taken a back seat to hard wheats due, in part, to directed breeding efforts, combining hard kernel and strong gluten. Hard wheats do have an advantage in producing flours with higher starch damage, which is good for dough fermentation and water absorption.

“However, for many low moisture products such as cookies (biscuits) and crackers, starch damage and high-water absorption are undesirable,” Morris said. “Soft wheats too can have strong gluten. The glutenin and gliadin genes are independent from the Puroindolines. Probably the biggest technical challenge related to soft wheat milling is that their flours, comprised of smaller mean particle size, do not flow well and require greater sifting/bolting surface.” 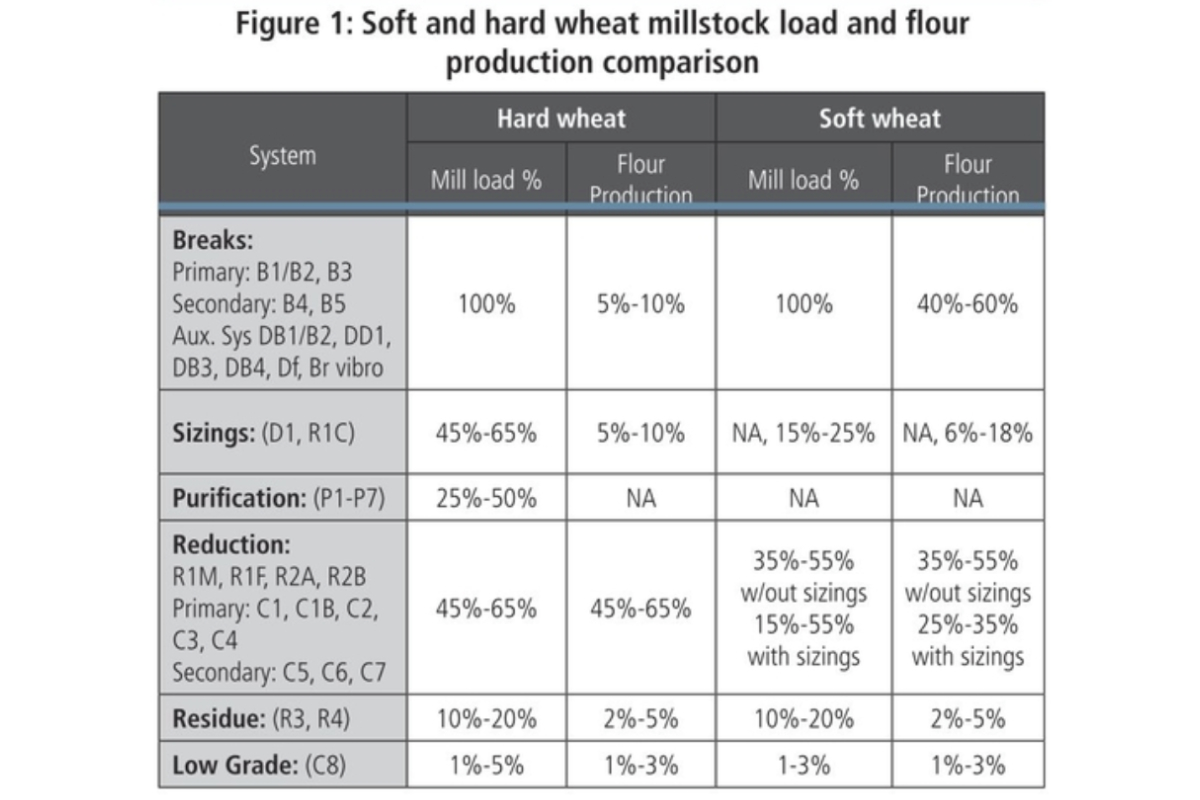 Soft wheat breaks down more quickly than hard common wheat. More flour is produced on the break system for soft wheat than for hard wheat, requiring greater sifting capacity for the former. Endosperm of soft wheat adheres more strongly to bran, reducing flour extraction rate expectations by up to 2% unless sifting capacity is increased. Yield of semolina and middlings is lower, so purifiers are of less importance and often are absent. Stock is stickier and fluffier, which makes it more difficult to sift than hard wheat stock. Soft wheat is fed more slowly to the mill to facilitate sifting and to ensure that stock flows freely through the mill. Generally, this results in lowering of production by about 25% to 30% when milling soft wheat in a hard wheat mill.

“Soft wheat requires less tempering moisture (13% to 14.5%) and less time (4 to 8 hours) to rest in the tempering process when compared to hard wheat,” said Jeff Gwirtz, a milling industry consultant and president of JAG Services Inc. “Excessive temper moisture in soft wheat reduces the miller’s ability to sift efficiently and remove endosperm from the bran as well as negatively impacting flow properties and mill balance. Soft wheat more easily releases its endosperm as flour rather than granular endosperm particles requiring purification to classify compound particles. The flour generated from soft wheat has a very fine particle size (D50=30 ± μm) when compared to hard wheat flour (D50=62 ± μm). This contributes to increased sifting and separation challenges in the mill often requiring more sifter and roll surface and changes in allocation due to loading.

“In the production of straight grade flour, the ash content and yield differences between soft and hard wheat flour are minimal. Generally, soft wheat will produce a slightly lower flour yield with a somewhat lower ash content. Soft wheat does produce significant quantities of low ash bright white flour suitable to a variety of specialized products, including cakes, cookies, pastries, pretzels and crackers. Soft wheat millers must balance the technical requirements as well as manufacturing economics to maximize resource utilization while maintaining profitability.”

Cake can be defined as a sweet, usually finely texturized food product, baked in various forms that differ in size and configuration. İt generally contains such ingredients as soft wheat flour, milk or other liquids, sugar, eggs, chemical leaveners, flavor extracts and spices as well as others that may or may not include shortening. Cake varieties cover a wide range from pound cake to yellow and white layer cakes, cakes containing chocolate and cocoa products, sponge cakes, angel food cake, fruit cakes and foam-type cakes, donuts and many others.

Cakes, muffins, quick breads, cake donuts, pancakes and waffles are all made from batters. Batters contain more water than doughs do, but the distinction between a dough and a batter is not always clear.

Although relatively less flour is used in cake making than in bread or cookie making, it profoundly affects quality. Cake volume is negatively correlated with wheat hardness and soft wheat flour is indeed preferred for high-quality cakes, mainly because of its small particle size.

Cookie is a small cakelike product, either flat or slightly raised, usually – but not always – with a relatively low moisture content, made from a dough or batter that is sufficiently viscous to permit the dough pieces to be baked on a flat surface. Cookies come in an infinite variety of shapes, sizes, composition, texture, tenderness, colors and tastes. The term is synonymous with biscuit as used in most countries other than the United States and Canada.

Soft wheat flour is preferred to produce cookies because it binds less water than hard wheat flour. Water relationships in cookie dough have a major effect on cookie quality (i.e., cookie spread, texture). If hard wheat flour is used in a cookie formula, the result is usually a tough or very hard cookie that spreads little during baking.

Cracker is a dry, usually thin, crisp biscuit that may be either semi-sweet and chemically leavened, as graham crackers and the highly-flavored snack crackers or unsweetened, fermented and layered, as the soda cracker.

There are several types of crackers, but all are made from doughs. Water relationships are very important in cracker processing, and soft wheat flour with a low and constant absorption is preferred.

Noodles are widely consumed in East and Southeast Asia and are a staple in Northern China. The popularity of noodles, particularly instant noodles, has spread globally.

There are two general types of wheat flour noodles: Chinese white salted noodles and yellow alkaline noodles, known as udon and ramen noodles, respectively, in Japan. Noodles are generally made from flour from common wheat, rather than from semolina of farina, and contain salt(s), in addition to flour and water. However, starch noodles, made principally from mung bean starch, also are produced throughout Asian countries but are consumed less frequently than flour noodles.

Chinese-type noodles are generally made from hard wheat flours, characterized by bright creamy white or bright yellow color and firm texture while Japanese white salted noodles are typically made from soft wheat flour of medium protein content. It is desirable to have a creamy white color and a soft and elastic texture in Japanese noodles. The finer particle size and lower protein of soft wheat flour gives the soft and elastic bite and smooth surface desired for Japanese white salted noodles. As flour protein content increases, noodle firmness increases, therefore, the optimal flour protein for Japanese white salted noodles is lower than for yellow alkaline noodles. As protein content increases, flour becomes darker and, accordingly, noodle brightness is reduced.