World weather continues to be chaotic and apparently more volatile than decades ago. It is widely discussed, complained about frequently and often totally misunderstood. The kingpin of weather on this planet is the sun, and no ocean or atmospheric pattern exists without the power of the sun influencing it. One of the discoveries in modern history has been that the sun is not a constant burner and there are periods in which the sun produces greater heat energy and times when it produces less radiant energy. There is evidence that the sun has been producing less energy since the 1980s, and we may be entering a very rare long-term solar minimum. World Weather, Inc. believes this change will add more volatility to world weather.

Scientists have been watching the sun on a consistent basis for more than 400 years. Observations with a telescope began in the 1600s. One of the lessons learned so far is that the sun — just like the earth — experiences cyclical changes to its atmosphere and to its inner core. These changes influence the amount of radiant energy that reaches our planet. One of the quickest ways to monitor this change is by counting sunspots.

A sunspot appears as a dark blotch above the surface of the sun when viewed through a telescope. These dark blotches vary in size and are associated with changes in magnetic fields in the sun’s atmosphere. You might call these magnetic storms. However, these sunspots tend to be more numerous during periods in which the sun’s energy is increasing and fewer in number when the sun is quieting down.

There is a “normal” 10- to 12-year cycle in sunspots in which sunspot numbers go from zero in the initial year of the cycle to some maximum number about 5 or 6 years later, and then the sunspot numbers come back to near zero when the solar cycle is ending in years 10 through 12. The relative difference in the total number of sunspots recorded in a 10- to 12-year cycle relative to that of the previous cycle is then a great indicator of how much more or less energetic the sun has been.

The theory suggests a notable solar warming trend occurred from 1935 to 1960. A period of cooling then occurred into the 1970s. You may recall during that time period that theorists were suggesting the earth was going to cool significantly and the climate was going to change. Some extremists suggested another ice age was coming. A few years later it was obvious that the forecasts about the atmosphere were incorrect.

That was followed by a period of strong solar warming that occurred in the late 1970s and early 1980s. Even though the solar cycle has been in a cooling mode since the late 1980s, our atmosphere has not been cooling very well. That is why research scientists have concluded that we have polluted our atmosphere so severely that the planet cannot cool down. But what if we move into a prolonged solar minimum that lasts decades? Will the earth finally cool down? 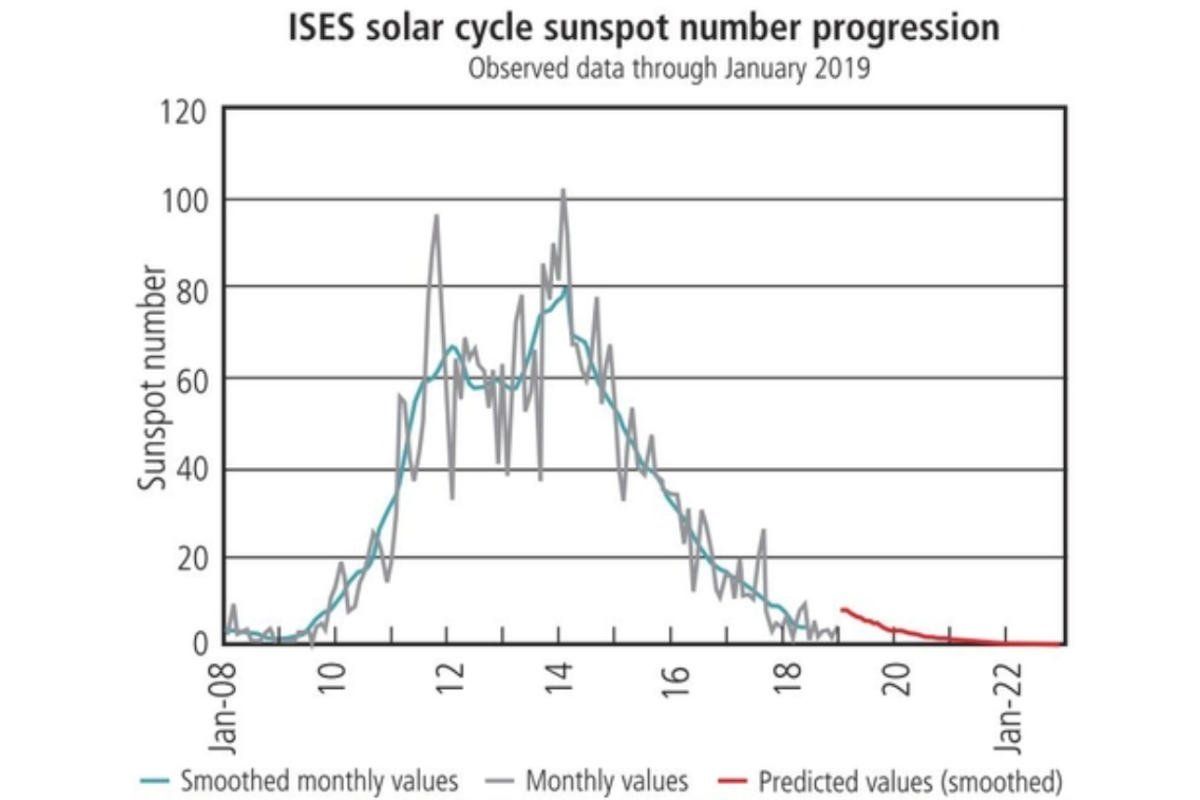 Solar scientists think they understand the sun a little better, and a few bold predictions have been made recently that the current solar minimum may last for many years. U.S. National Aeronautics and Space Administration and the U.S. National Oceanic and Atmospheric Administration feel comfortable enough with the theory that they have predicted this solar minimum that begins this year will last at least until 2023. Typically, a solar minimum will last up to 18 months. The solar minimum in 2008 lasted nearly two years and this one is being projected to be twice as long. Some research scientists speculate that this solar minimum will lead into the next “grand solar minimum,” the last of which was seen from 1645-1710 and was dubbed the “Maunder Minimum.” The Maunder Minimum lasted 70 years — long enough to bring down earth’s temperatures so that several areas around the world reported colder winters and colder summers. The unfortunate part of the data is that there was no official weather reporting station network back in those times. There is virtually no weather data to fall back upon in relation to such a prolonged period of solar inactivity, which leaves the door open regarding what the impact is likely to be here on earth.

Since there is no recorded weather data, studies cannot be made as to what the impact of a prolonged solar minimum might be on world weather and agriculture. Any forecast would have to be labeled as highly speculative and one of low confidence.

World Weather, Inc. has been noting a decline in humidity in the stratosphere in recent years. This decline is likely associated with the change in solar energy reaching the earth and may be at least a small indicator that there is cooling taking place in that part of our atmosphere. The stratosphere is the next layer of atmosphere above the troposphere, which is where we live. The troposphere has had trouble cooling down like it used to during solar cooling periods and the reasoning is that this part of the atmosphere is full of water vapor and other gases that are resisting the change in atmospheric cooling. However, if the sun stays in this cooling trend for a few more decades, it is perceivable that cooling will eventually reach the troposphere. However, it is a huge assumption that the solar minimum will last that long. Since we have not been here before in modern times, we must be careful not to make judgment calls as to what will happen to our atmosphere over the next several years.

The one thing we believe with confidence is that the stratosphere will continue to cool down, and since this part of the atmosphere is immediately above the troposphere, cooling eventually will reach some of the higher altitudes of the troposphere. Once it cools sufficiently high up in our part of the atmosphere, strong thunderstorms and very deep mid-latitude storm systems will be able to tap into that cooler air, resulting in more episodes of intensive rain, flooding and extreme temperatures (both hot and cold).

Some scientists believe this phenomenon already has begun, and that explains some of the wild weather that has been occurring around the world. We have a “fully loaded” atmosphere full of warm, moist air, and the only thing that is needed to produce some really extreme weather conditions is sustainable cold air aloft to intensify storm systems more than we are used to seeing. For that reason, we should expect more volatility in our world’s weather, including bigger storms and more serious flooding, greater periods of drought and unusually intense cold and hot air masses. Any one of these phenomena could occur at any time, and that raises the potential for earlier-than-usual autumn freezes and later-than-usual spring freezes.

All of these weather impacts will have a big influence on agriculture, which may change productivity. But, at the very least, this will give more incentive for further development in crop genetics so that productivity will be less impacted by the possible coming weather extremes.