AMES, IOWA, U.S. — Massive flooding in the Midwestern U.S. is wreaking havoc on stored grain as well as storage structures, and its likely the area of damage will expand.

Nebraska has been declared a major disaster area and crop damage there is estimated at $440 million. The governor of Iowa has asked U.S. President Donald Trump for an expedited disaster declaration for that state, where agriculture damage is estimated at $214 million.

A major storm in mid-March, coupled with large-scale snow melt resulted in vast amounts of water that has breached levees, pushed rivers and streams over their banks, and in Omaha, Nebraska, shut down a sewage treatment plant.

“We don’t know how much grain is covered by this, but I don’t think it’s over,” said Charles Hurburgh, professor of agricultural and biosystems engineering at Iowa State University. “This massive wall of water is working its way down the Missouri river and it’s going to contact the Mississippi.”

Add to that melting snow fall from Wisconsin, Minnesota and northern Illinois, and it’s hard to say how big the problem might get.

Hurburgh, who is based in Ames, Iowa, U.S., said he’s seen everything from bins in two to three feet of water to others that are completely submerged.

Steel bins that contain grain can be damaged when flood waters cause the grain inside to swell, he said. Water can enter through the aeration fans or seep in through the bin bottom.

“Every situation is going to be a little bit different, but in a general way, there is probably going to be some damage to bins,” Hurburgh said.

The swollen grain puts increasing stress on the bolts and the bin seams, said Brad Jorgenson, vice-president of engineering for Chief Agri, a bin manufacturer based in Kearney, Nebraska, U.S.

“When it swells, it puts more load on the rings, which can cause bolts to shear or holes to elongate,” he said. “You’re going to have to go around and see if any bolts are sheared and look at the seams, where the bin sheets bolt to each other, to see if the sheets have moved.”

If a bin is empty, rushing water could cause damage to the exterior of the bin, Jorgenson said.

“The outside of the bin is not designed to have the force of flood water on it,” he said. “If there is damage from flowing water, the damage can be found through a visual inspect. Any damaged components should be replaced.” 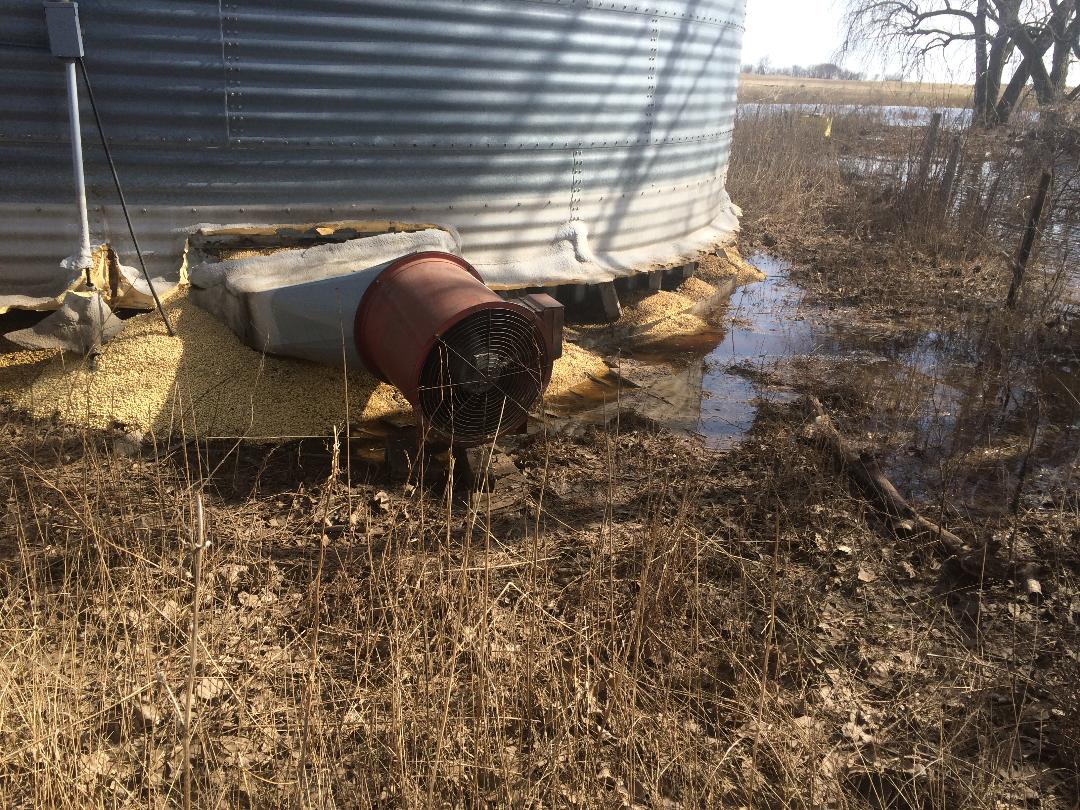 Bin foundations can shift, float or deteriorate from flooding and it may not be obvious as flood waters recede. Hurburgh said an engineer will be able to check the seal around the bin bottom to see if it’s broken.

“Excessive water can cause stable ground to not to be stable anymore,” Jorgenson said. “As far as the steel structure, once the grain has been unloaded, and if the foundation is stable, no further damage should occur.”

Jorgenson recommends foundations of all the structures at a facility be inspected to ensure water didn’t erode the soil and destabilize the foundation.

Even poured concrete silos could be damaged, Hurburgh said, depending on how the water came into the structure.

If the steel bin stays intact, once the swollen grain is removed, it’s likely bolts or some sheets will have to be repaired, not necessarily the entire bin, Jorgenson said.

Chief hasn’t had many calls about bin repairs yet, likely because facilities are still dealing with the water.

“People are trying to recover, they haven’t gotten into what do we do with this bin right now,” he said.

Electrical equipment inside the bin can also be damaged by flood waters. Hurburgh said underfloor conveyors and legs should not be used once water enters the pits. Expect wiring, controls, motors and fans to be ruined, he said. Both Hurburgh and Jorgenson said a qualified electrician should inspect the equipment before it is turned on again.

“Never try to start the equipment without having it completely inspected first because that is a prescription for an electrical fire or arc flash,” Hurburgh said. “Just assume that electrical equipment that’s been under water is ruined.”

Before returning to operation, the bins will have to be cleaned and disinfected, he said.

Flood waters also are damaging grain still in storage, although Hurburgh said it’s too early to guess how many bushels were impacted.

Grain that is soaked by flood water is considered adulterated by the U.S. Food and Drug Administration (FDA) because there is potential of contaminants from the water, he said. This grain should be destroyed, and never blended with other grain.

Good grain should be removed through the top or side of the bin not through the flooded portions.

In Iowa, agriculture leaders have worked out a plan for handling the suspect grain, Hurburgh said. A representative sample should be graded by an official U.S. Department of Agriculture inspector and tested for mycotoxins.

“Get a grade and mycotoxin test, and then the decision as to what to do with the grain requires a consultation with the FDA or its designee,” he said. “We recommend feeding it to livestock rather than taking it into food chain.”

Following this flood, grain producers should think hard about where they build storage, and avoid floodplains, Hurburgh said.

“Forecasters all say these variable events are going to happen more frequently,” he said. “It doesn’t seem to me to make good sense to put storage structures in those floodplains.”