We use cookies to provide you with a better experience. By continuing to browse the site you are agreeing to our use of cookies in accordance with our Cookie Policy.
Home » Grain Market Review: Rice

The international rice market largely has drifted lower in recent months, in quiet trade. In the United States, the absence of official reports, unavailable because of the government shutdown, has left traders with limited information.

In its Rice Advocate publication for Jan. 17, the U.S. Rice Producers Association reported on a slow week in the industry, with only minor changes in price and even fewer changes in market fundamentals.

“With the government shutdown still in full effect, the standard publications that are used for federal information remain unavailable,” U.S. Rice said. “To that effect, the market itself it essentially operating ‘blind’ with respect to export volumes and crop projections.”

Trade has continued despite the lack of information. 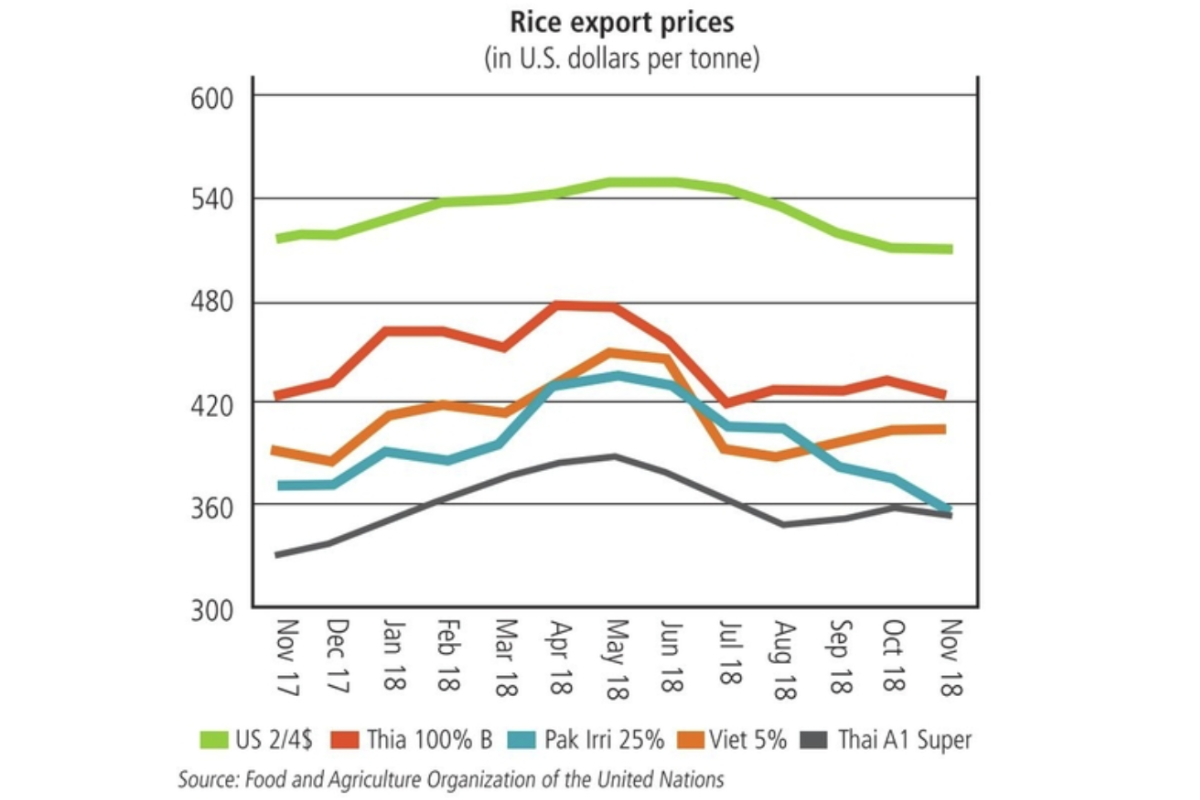 “Export sales have continued to move, and while there are no official numbers to report, industry sources seem to suggest that sales and loadings have continued apace with the earlier trends,” the association said. “Similarly, the world market price estimate has not been updated, but with the miniscule changes in the underlying factors, it is reasonable to expect that the WMP numbers will not show any major adjustments when the government resumes its role.

“Asian benchmark prices have generally been sideways with the up and down movement that is generally associated with currency exchange rates. U.S. cash prices are holding moderately steady across the rice growing regions primarily due to producers not being willing to trade at the lower levels.”

Growers were moving only small volumes.

“The remainder of rice in first hands appears to be rather firm as producers are content to hold out for higher prices,” the association said.

On Jan. 10, reporting on its Food Price Index for December, the United Nations Food and Agriculture Organization (FAO) said that “international rice prices subsided for the sixth successive month, pressured further by a quiet pace of trade.”

“Last month’s decline was the result of a 1% fall in the Higher and Lower Quality Indica Indices and a 2.4% retreat in Japonica quotations,” the FAO said. “By contrast, the Aromatica Index rose by 1.3%, underpinned by expectations of reduced fragrant harvests in India and Thailand, along with a strengthening of the Indian rupee.”

The FAO said that with a few notable exceptions, November quotations of Indica rice were seasonally down across much of Asia.

“Prices faltered the most in Pakistan, sliding to 23-month lows, as new crop arrivals compounded on downward pressure exerted by lackluster demand and another Rupee depreciation,” the FAO said. “Thai quotations also took a downturn, amid improved supplies from new crop harvests and heightened competition for markets. Instead, public domestic purchases and currency movements sustained an uptick in Indian offers, despite a late-month government decision extending a 5% duty credit scrip to non-basmati exports for four months.”

In Vietnam, the expectation of sales to the Philippines kept price gains going, although the market was otherwise quiet.

“In the Americas, Indica values held broadly steady in Argentina, the U.S., and Uruguay, while U.S. medium-grain prices subsided for the fifth successive month, amid efforts to secure sales in the Far East,” the FAO said. “Quotations also softened in Brazil, pressured by subdued local demand and a weaker real.”

In its Grain Market Report at the end of November, the International Grains Council forecast record world rice trade in 2019, at 49 million tonnes, a year-on-year increase of 1 million, on demand from Africa and Near East Asia. It reported white and parboiled rice prices steady to slightly weaker, “largely reflecting pressure from new crop arrivals and generally slow demand in Asia.”

Prices in Thailand had come under pressure from sentiment on new crop supplies with 5% broken export values down by $8, to $380 fob. It reported firm prices in Vietnam on tight availability and hopes of sales to the Philippines, while fob quotations in India and Pakistan were softer on rising new crop supplies.