We use cookies to provide you with a better experience. By continuing to browse the site you are agreeing to our use of cookies in accordance with our Cookie Policy.
Home » Grain Market Review: Oilseeds

Oilseeds markets have been dominated by the effects of the U.S. trade war with China as markets react to every hint from either side. Price movements have been mixed as the uncertainty’s impact varies from region to region.

“While U.S. values strengthened as hopes for a breakthrough in the trade dispute with China factored, fob quotations retreated significantly in South America,” the IGC said.

The rise in Chicago was despite seasonal harvest pressure and a bearish supply and demand profile.

“And with Gulf premiums just a touch weaker, export quotations posted a net gain of 3%, to $333 fob,” the IGC said.

Markets in the southern hemisphere weakened.

“In Brazil, where a fast seeding pace was a background bearish influence, a retreat in international buying interest weighed amid ongoing trade discussions between the U.S. and China,” the IGC said. “This was despite support from currency movements and limited grower sales. This resulted in a heavy fall in basis levels — of about 50% m/m — as export quotations (Paranagua) dropped by 8%, to $372 fob. In Argentina, Up River offers were down by 7%, to $360 fob.”

“Despite prospects for a marked reduction in acreage and a smaller outturn, E.U. rapeseed futures were a touch weaker,” the Council said. “To some extent, this reflected losses in vegetable oils, notably palm oil, as well as energy markets.”

“Global soybean production is reduced 2 million tonnes with lower production for the United States and Argentina partly offset by increases for China, India and Ukraine,” the report said. 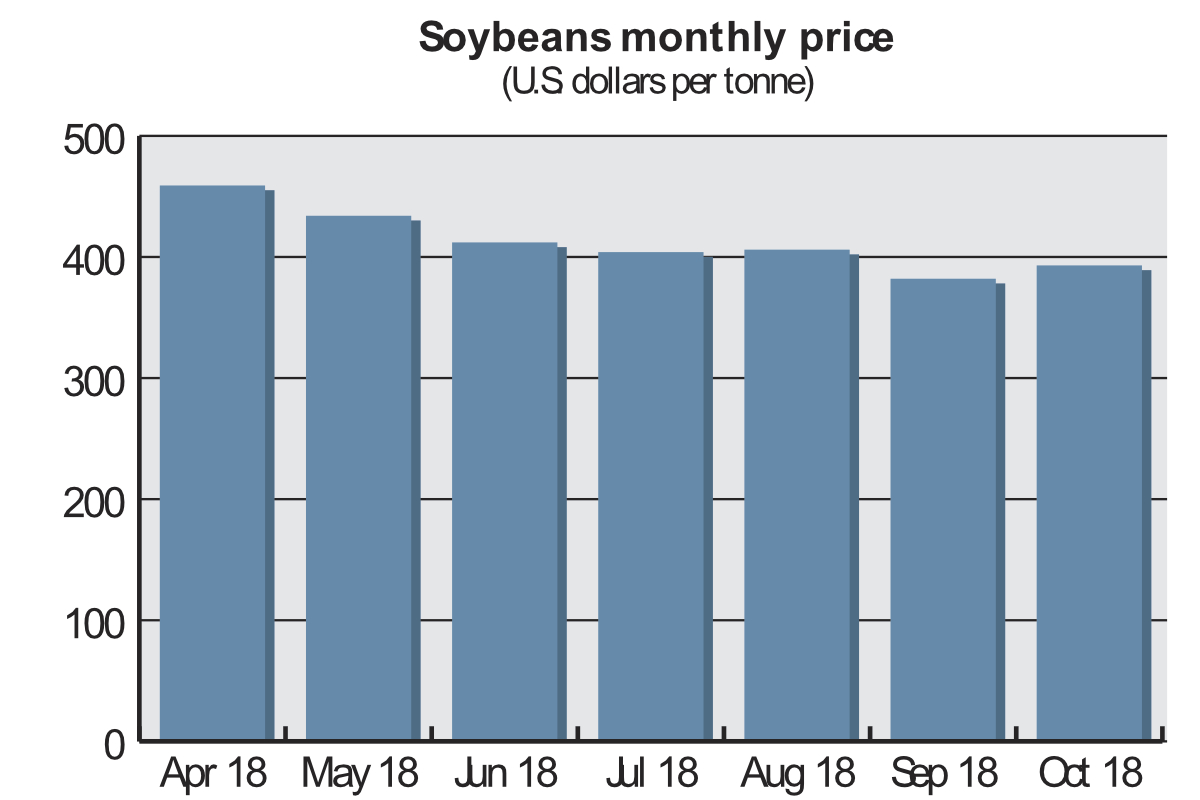 In its Oil Crops Outlook report, published Nov. 13, the USDA’s Economic Research Service highlighted a cut in the forecast for China’s 2018-19 soybean imports to 90 million tonnes from 94 million, “based on a greater availability of domestic supplies and lower expected use.”

“Rapidly rising costs of soybean meal in China are encouraging feed compounders to substitute as many other proteins as possible,” the ERS report said. “China is facilitating the substitution by recently ending a ban on imports of Indian rapeseed meal.

“The current pace of China’s soybean crushers has been sustained by a record volume of trade from Brazil. In the September-October period, Brazilian soybean exports normally fall toward a seasonal low as they are eclipsed by U.S. new-crop shipments. A starkly different trade pattern prevails this year, however. Shipments from Brazil for the two months totaled nearly 10 million tonnes — its highest level ever and up 47% over a year earlier. China accounted for nearly all of those shipments.”

For Argentina, with farmers viewing corn as a more profitable crop than soybeans, the USDA reduced its harvested area by half a million hectares to 18.5 million, but the ERS explained that, due to lower abandonment, the harvested area could still eclipse 2017-18’s 16.3 million hectares. The forecast for the country’s 2018-19 production has been lowered to 55.50 million tonnes from the previous figure of 57 million, but remains well up on the 2017-18 crop of 37.8 million tonnes.

“As with Brazil, an extended U.S. absence in China’s import market may help Argentine soybean suppliers to command a larger market share throughout the second half of 2018-19,” the ERS said. “Yet, a possibly smaller increase for the 2018-19 Argentine crop may also encourage domestic processors to extend their purchasing of soybean imports from the United States and Paraguay.

“Amazingly, Argentina (the third-largest soybean producer globally) would become the world’s fourth-largest import market in 2018-19 with its purchases totaling 4.2 million tonnes. Prospects for such rerouting of international trade become even more likely if China soon approves the importation of Argentine soybean meal.”