Despite rain that slowed work in the fields, the U.S. rice harvest put pressure on domestic prices in September, while other producers around the northern hemisphere have seen the weather slow harvesting.

In its Grain: World Markets and Trade report, published on Sept. 12, the USDA said, “U.S. FOB export quotes for long-grain milled rice (bagged) have finally dampened to $550 per tonne on the ongoing harvest and generally favorable production prospects. The quotes remain slightly above South American suppliers such as Uruguay, still quoted around $520 per tonne. Meanwhile, nearly all the major Asian exporters are quoting slightly below $400 per tonne on tough competition and abundant supplies.”

In its Rice Advocate on Sept. 14, the U.S. Rice Producers Association described the current state of the market as “buyers and sellers playing tug of war.” Saturated fields had slowed harvesting in parts of the United States, and while there was pressure to load, “it would seem that buyers and sellers have yet to come together on an acceptable price.”

“Asian pricing remains virtually unchanged since the last report, with the minor fluctuations being chalked up to currency adjustments,” U.S. Rice said. “As if to confirm the quiet undertone, the USDA has held its world market price estimate unchanged as well.”

“In most areas, this does not sit well with producers,” U.S. Rice said. “However, the realities of a bumper crop in conjunction with old crop still in storage has left many growers with little choice.”

The association referred to the World Agricultural Supply and Demand Estimates (WASDE) report, published Sept. 12, which put U.S. rice production at 6.97 million tonnes for 2018-19, up from its August forecast of 6.7 million. 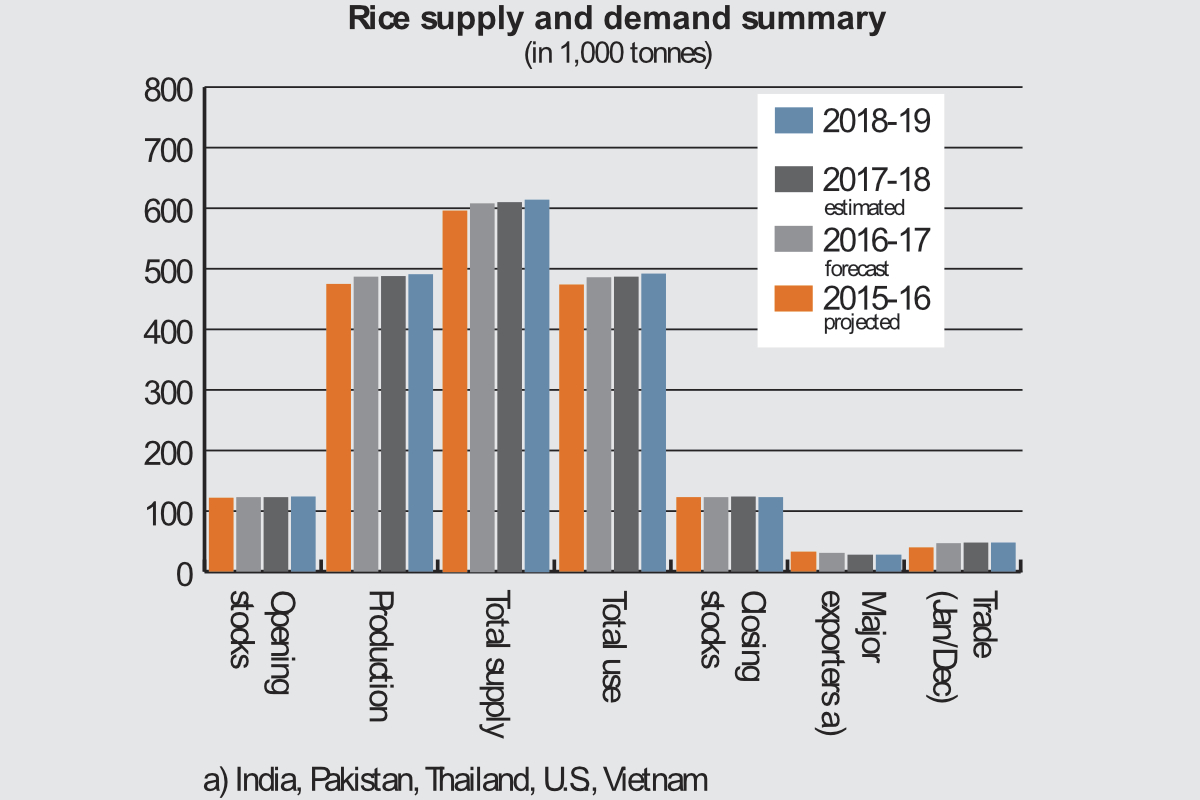 “Japonica and lower quality Indica prices were behind last month’s index decline, falling 4.8% and 2.2% month-on-month, respectively,” the FAO said. “The decreases came as suppliers vied for fresh business, with japonica sentiment also influenced by the positive outlook for the soon-to-be-launched harvest in California. Instead, the Higher Quality Indica Index held steady, while fragrant prices inched up by 1% on currency movements and seasonal tightness.”

The FAO said that in Asia, Indica quotations registered the sharpest monthly fall in India, pressured by a rupee depreciation and lackluster buying interest.

“Since fresh demand remained limited, the undertone was also steady to weaker in Pakistan and Vietnam, even though delays in the summer-autumn harvest induced by rains tended to cap losses in Vietnam,” the FAO said. “Competition with other suppliers also weighed on Thai A1 Super, but a stronger baht, anticipated G2G sales to China and demand from the Philippines underpinned a partial recovery in most other Thai quotations.”

The FAO also reported weaker prices in the United States, “as the onset of the 2018 harvest provided room to narrow the large price differentials with South American origins hitherto sustained by limited availabilities.”

On Argentina and Uruguay, the U.N. organization said that tight margins offset currency fluctuations and a quiet pace of trade, while Brazilian quotations rose again on expectations of sales remaining upbeat.

The most recent International Grains Council report, released in August, reported an edging higher underpinned by demand from Asian and African buyers.

“Owing to a slowdown in cutting in Thailand and Vietnam due to heavy rains, there was also less supply-side pressure than in earlier weeks,” the IGC said.

The IGC said quotations for 5% broken in Thailand advanced $13 per tonne, to $385 per tonne fob, on good demand from private buyers in the Philippines, and as rainfall disrupted harvesting and loadings at ports.

“Precipitation also delayed cutting in Vietnam, where offers for the 5% grade rose by $10 per tonne to $393 per tonne fob,” the IGC noted in its report.