We use cookies to provide you with a better experience. By continuing to browse the site you are agreeing to our use of cookies in accordance with our Cookie Policy.
Home » Grain Market Review: Coarse Grains

Coarse grains markets received a jolt Aug. 10 with a WASDE report that put U.S. corn yield at a record level that was higher than market expectations. The initial reaction was a sharp sell-off, but fundamental factors, notably the perception that the world market supply/demand situation is tightening, soon triggered a partial reversal.

“December corn futures dropped 11 cents/bushel ($4.33 a tonne) following Friday’s August WASDE, but have since recovered all but 3 cents ($1.18/tonne) of that loss,” the U.S. Grains Council said in its Market Perspectives report on Aug. 16. “The WASDE’s initial bearishness came from record U.S. yield estimates and the consequent increase in U.S ending stocks,” the USGC said. “The recent recovery in corn futures, however, appears to be driven by perceptions of a tightening global supply situation.”

The USGC said that the August WASDE report shocked most market participants with a record-breaking U.S. corn yield of 11.204 tonnes a hectare, more than forecast by most analysts.

“USDA’s forecast, however, proved the efficiency of modern farming along with the overall excellent growing conditions dealt to U.S. corn this year,” the Council said. “The U.S. crop is well-advanced in its maturity, with double the typical share of corn entering the dent stage this week. 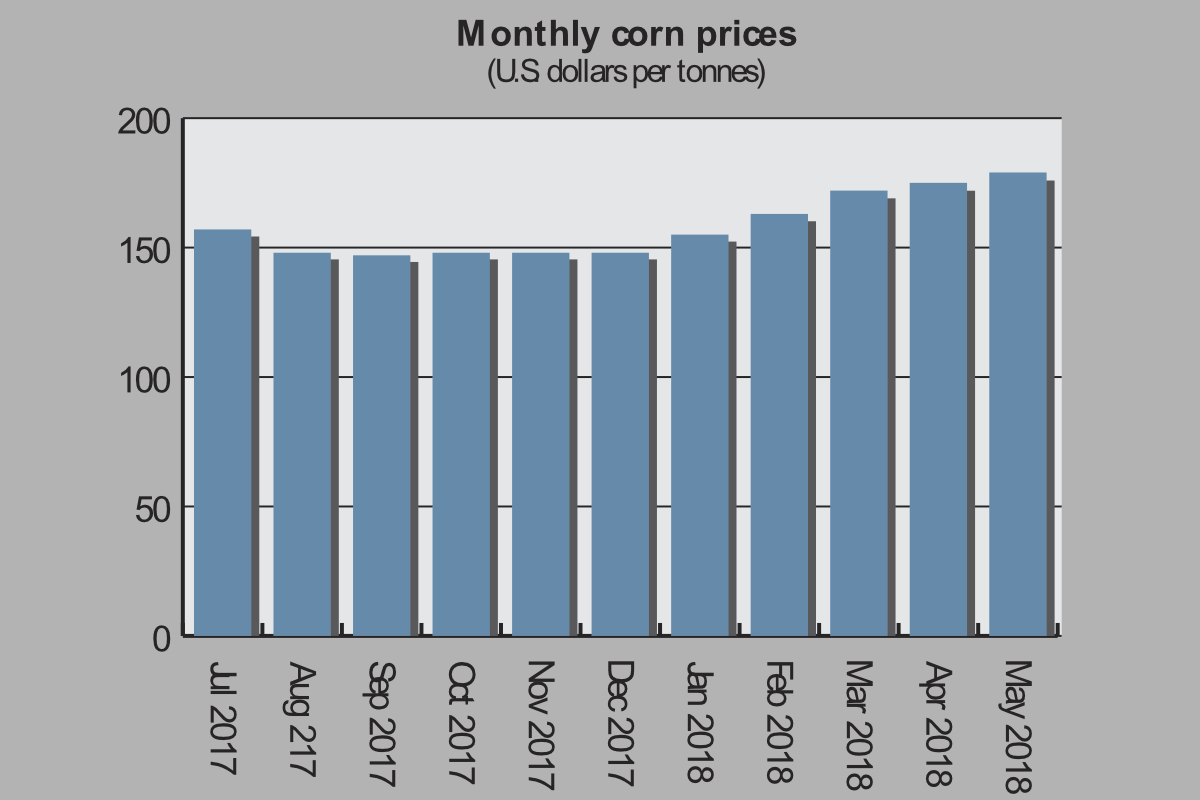 The WASDE report’s own description of the outlook for coarse grains outside the United States in 2018-19 was for “lower production, reduced trade, and slightly lower stocks relative to last month.”

The USDA cut its forecasts for E.U. corn production on reduced prospects for France and Germany, partly offset by increases for Romania and Bulgaria. Brazil’s corn crop forecast was cut based on changed expectations for a second crop that will not be planted until early 2019.

In a commentary on the WASDE report, published the same day, Rabobank highlighted the prospects for U.S. corn exports.

The market’s reaction to the latest USDA estimates came after a low period for corn.

“After slumping to a near-six month low in early July, global export prices posted a partial recovery in recent weeks, with the IGC GOI maize sub-Index up by 2% compared to the last GMR,” the International Grains Council (IGC) said in its Grain Market Report in late July.

The IGC described a period in which U.S. futures were little changed as ideas on yield varied. A modest recovery in the peso had supported dollar-based prices in Argentina, but “with traders mindful of stiff international competition, gains in Up River quotations were limited to $6, to $169 fob,” the IGC said.

“An upturn in export demand contributed to firmer cash markets in Brazil,” the IGC also reported. “However, physical trading was stalled by a continued impasse over trucking costs. Paranagua prices rose by around $4 m/m, to $178 fob.”

The IGC’s index for barley rose by 11% on the month, “due to worsening crop prospects in the E.U., the Black Sea region and Australia.”

The U.S. sorghum market firmed and then fell off in the second half of July due to slowing export demand, while Argentina’s harvest and stronger currency meant softer prices there, the IGC reported. U.S oats were down on good crop ratings and negative technical features. There was a firm tone to oats in the E.U. amid some concern about the effect of dryness on crops. Rye rose by 7% in Germany in the month leading up to the publication of the IGC’s report as harvest expectations fell.